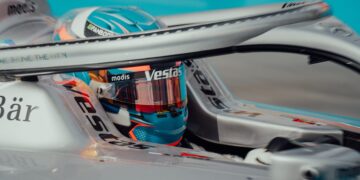 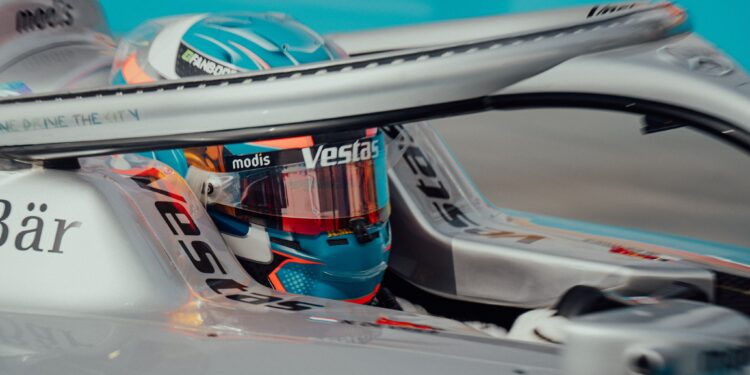 Diriyah E-Prix 1 – Nyck de Vries took the first win of the year ahead of his teammate after an Attack Mode problem for Vandoorne lost him the lead.

After qualifying the quickest driver from both practice sessions, Oliver Rowland, was handed a three place grid penalty, and a penalty point, for driving too slowly in the pitlane during qualifying and impeding Pascal Wehrlein. That meant Rowland dropped from P8 to P11, and moved Lucas di Grassi, Maximilian Guenther and Wehrlein himself up to P8, P9 and P10 respectively.

Leading off from pole, Stoffel Vandoorne got a good start and held his position but behind him it was his teammate, Nyck de Vries, who had a better launch than Jake Dennis as the Andretti driver lost P2 to the Mercedes.

Further down the top ten it was Grassi, now a Venturi racer, who jumped up from P8 to P6, to slot in behind the only other driver to have competed in every Formula E race, Sam Bird. A couple of laps later and the Brazilian slipped past into P5.

It was not an ideal start to the year for DS Techeetah’s season 6 champion, Antonio Felix da Costa, the Portuguese driver pulling into the pits with damage at the end of the opening lap.

Andre Lotterer was the first to activate his Attack Mode, which for today is set at two activations of three minutes each, and the Porsche driver used the extra power to help him close up to the leading three who had pulled a gap.

Just over ten minutes into the E-Prix and the Porsche Taycan Turbo S made its debut appearance as Safety Car, after Rowland ended his day backwards and in the wall at T17 after a contact-filled battle with the Envision of Robin Frijns. Frijns was later handed a drive-through penalty for the incident, while Rowland was given another 3 place grid drop for tomorrow’s race for his part in it.

The Porsche Taycan relinquished the lead of the race to Vandoorne after 7 minutes and the race resumed with an unusually spread out field. Second Attack Mode activations were the order of the day. Lotterer made the most of his, moving past Dennis for P3, while the Andretti driver tried to recover the position with the last few seconds of his own boost he met stiff opposition from the Porsche driver.

There was a change at the front soon after the Safety Car went in as Vandoorne tried to take his second Attack Mode but failed to hit all the activation loops and instead fell behind his teammate. They both took their final Attack Mode the following lap which meant neither had an advantage and the Belgian was unable to regain the lead.

Half an hour into the race and Dennis had closed back up on Lotterer, he made a move into the first corner but went wide on the exit, and instead of getting back into P3, fell back from the Porsche and into the clutches of Bird and di Grassi. A couple of laps later Dennis tried again and while the two made contact, the Andretti driver was just able to slide past.

While Dennis pulls a gap, he radios his team to report what felt like a right rear puncture, but was told to continue, behind him it was now Bird right on Lotterer’s tail. However the Brit made a mistake, which dropped him slightly back and left him then defending from di Grassi and Cassidy behind.

However with five minutes on the clock, pre-additional time, Bird pulls a clean move on Lotterer at T1 while di Grassi follows through to demote the Porsche to P6. Lotterer’s day went from bad to worse as the German was struggling on energy it was announced that there would be 5 minutes and 15 seconds added to the race time, and over the next few laps Lotterer slipped further down out of the points to end P13.

There was a great battle for P8 in the closing stages with Vergne and Evans, the Jaguar driver using his FanBoost to try to attack the Techeetah but just not being able to make it stick at that point but did get through a little later.

So it ended with the reigning champions taking the top two places on the podium while Dennis brought Andretti P3. Bird was P4 ahead of di Grassi while the Brazilian’s Venturi teammate, Edoardo Mortara, who crashed out of qualifying, ended the day P6.

Nick Cassidy was the best of the Envisions in P7. Vergne ended the day P8 ahead of Andretti’s rookie driver Oliver Askew and Mitch Evans took the final point for Jaguar.