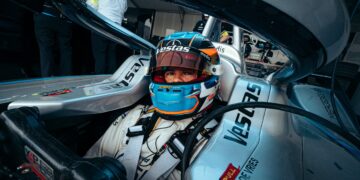 De Vries on pole 5 thousandths ahead of Mortara

De Vries on pole 5 thousandths ahead of Mortara 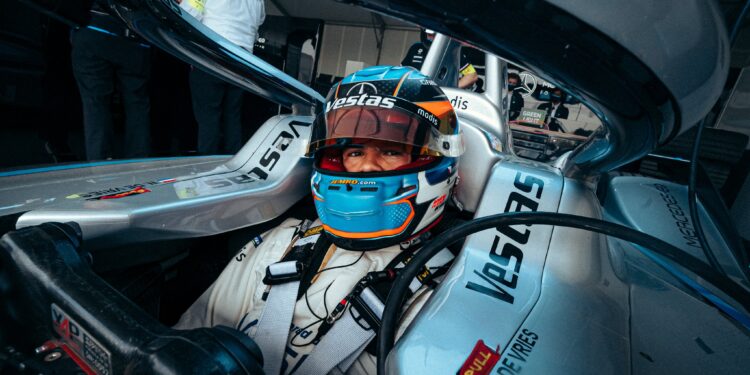 Diriyah E-Prix 2 – It was a very close-fought pole shootout with Nyck de Vries just coming out on top in his duel with Mortara.

After ending up in the wall during FP3, Nick Cassidy’s Envision Racing car was unable to be repaired in time, so he had to sit out qualifying and hope the car will be back in shape in time for the race.

With no Cassidy, Group A had one less driver to compete with for the top four spots. The Avalanche Andretti cars of Oliver Askew and Jake Dennis were first out on track, while Oliver Rowland and Lucas di Grassi were last out remaining in the pits for the first few minutes of the session.

The first quick laps were in the 1:09s except for Nyck de Vries who was straight into the 1:08s with a 1:08.542. As with yesterday, at the halfway point of the session the majority of drivers had retreated to the pit lane for tyre changes before the final push.

As expected there was a flurry of push laps in the final minutes with an ever-changing top 4, even with one less car on the track there were multiple incidents of blocking, ones that the stewards will be looking at are between Pascal Wehrlein and Sergio Sette Camara, as well as Sebastien Buemi and Sette Camara.

It ended with Nyck de Vries, di Grassi, Rowland and Andre Lotterer progressing, while yesterday’s finalist, Jake Dennis just missed out and will start either P9 or P10. After a contact-filled battle with Robin Frijns in yesterday’s race, Rowland will have to serve a three place grid penalty in today’s race.

In the second group, it was the DS Techeetahs who remained in the pits for the first three minutes, it wasn’t a bad strategy for Rowland and di Grassi but it will aid Vergne and da Costa remains to be seen.

It wasn’t an ideal session for Sam Bird, the Jaguar driver clunking the wall, and while he continued and brought it back to the garage, the team decided that it wasn’t worth the risk to return to the track and the British driver will be starting on the back row. Bent wishbone apparently.

Mitch Evans wasn’t overly impressed when Nissan e.dams’ Maximilian Guenther pulled out of pitlane and joined the track right in front of the Jaguar driver. As with Bird, Evans tapped the wall and knocked his steering which made his attempt to progress much more difficult.

Unlike Group A, the second group didn’t see all that much improvement in the final few minutes, and yesterday’s polesitter, Stoffel Vandoorne, failed to progress after getting out of shape on his final attempt.

Mortara, Frijns, da Costa and Vergne made it through to the quarter finals.

De Vries blowing Vergne out of the water with a time over six tenths of a second faster than the Techeetah.

The second duel was where things got a little strange, with da Costa out on track alone as di Grassi sat in the pitlane blaming the Techeetah for impeding them, which the stewards will be looking at. Once the Portuguese driver finished his lap, backing off near the end as he seemingly had no competition, the Venturi driver was allowed to take to the track to set his own time and went almost a second quicker. Neither da Costa or the Techeetah team were very impressed with the way things played out.

Video footage later showed both da Costa and di Grassi lined up at the end of the pitlane and the Techeetah not going leaving the pit lane on the first green light (his one) and instead leaving on the second green light (di Grassi’s one). Before the video was found da Costa had told Nicki Shields that “I went when I saw the green, as I was supposed to. [Others are] saying I went on Lucas’ green light. I’m hearing a thousand different things. From where I was I did nothing wrong. Either I’m blind or we as a team did something wrong.”

There was a short delay before the third quarter-final, Rowland almost hitting the wall on his lap but it was Frijns pulling away the whole time, and will head to the next duel. Lastly was Lotterer and Mortara, the Porsche driver putting it all on the line, but the Venturi driver was just too quick.

Semi-Finals – Di Grassi vs de Vries, and Frijns vs Mortara.

Both Venturi cars making it to the semis, and three of the four powered by Mercedes.

As he did in his quarter-final, de Vries just pulled away and posted another 1:06 time with his opponent, di Grassi this time, not making it out of the 1:07s. The second semi-final going the same way, Mortara ahead from the start and becoming the only other driver to set a 1:06 during qualifying.

De Vries was well ahead in sector one but Mortara fought back going purple in the final two sectors to almost take his first pole. In the end though it was Mercedes-EQ one again on pole with de Vries posting a 1:07.154 compared to Mortara’s 1:07.159.

Now that was CLOSE!

Only 0.005s separated @nyckdevries and @edomortara in our final qualifying duel ahead of Round 2 🤯⚡️

Both finalists being disappointed with their efforts knowing that they didn’t put in as good a lap as they know they could have.

Frijns will line up in P3 ahead of di Grassi as the Dutchman’s semi-final time was the quicker. P5-P7 will be Lotterer, Vergne and da Costa. The Portuguese having his time deleted for impeding di Grassi but was already the slowest of the quarter-finalists.

P8 will be Dennis, who was the first driver in de Vries’ group not to progress, with Alexander Sims P9, with Rowland starting P10 after his grid penalty was added.