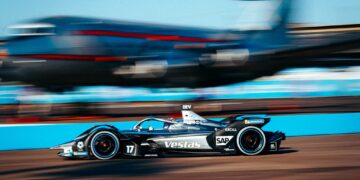 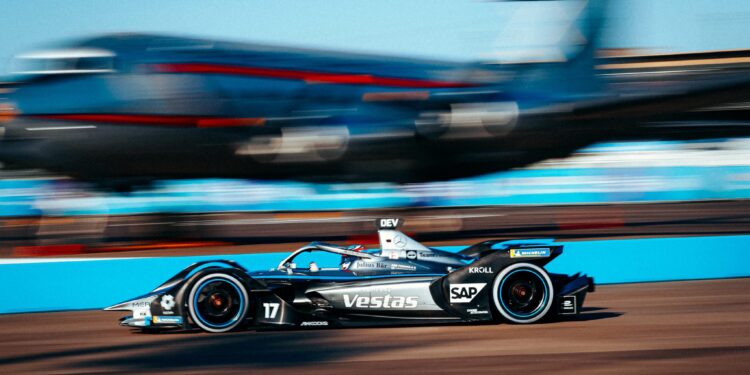 Berlin E-Prix 2 – Nyck de Vries took Mercedes’ second home E-Prix win but this time they have fans around to enjoy it with, Mortara and Vandoorne completed the podium.

Nick Cassidy, who made it into the duels and would’ve been starting from P6 thanks to the time he did in his quarter-final however the Kiwi had changed parts on his car today and was to drop a total of 80 places due to that. As he is unable to drop back that far on a 22 car grid, the Envision driver will start last and also take a 10 second stop and go penalty in the race.

As if all that wasn’t bad enough, Cassidy also has a 5 place grid drop to look forward to at the next race after he drove the wrong way down the pit lane after visiting the weighbridge following group qualifying.

With cloudless skies, it was a much hotter day than it was for the first race of the weekend yesterday so all the drivers were preparing for a tougher E-Prix with energy and tyre management expected to be more difficult.

With Cassidy having opted to start from the pit lane, Edoardo Mortara would be starting from pole for the second time in his Formula E career at the head of a 21 car field. Unlike yesterday however, it was not an ideal start from the Venturi driver. He had Robin Frijns on one side of him and Nyck de Vries on the other on the run to the first corner but it was the Mercedes who won that race, de Vries jumping from P3 to the lead ahead of Mortara.

Further back, after having his best qualifying performance and starting the race P16, Antonio Giovinazzi fell to the back of the pack at the start and was lapping seconds slower than anyone else.

After just five minutes of the race, the other Dragon Sergio Sette Camara in P15, was the first to head to the Attack Mode zone, to take what is becoming traditional for the second of a double-header weekend, his single eight minute long activation of the day.

Things were quiet at the front, de Vries not pulling much of a gap after ten minutes he was the first of the top runners to head to take his Attack Mode, dropping to P3 but making his way back to the lead within a few minutes. P6 and P7, Antonio Felix da Costa and Stoffel Vandoorne followed his lead with their only Attack Modes. Just before that however, Jean-Eric Vergne, who had been P8 seemed to be going a bit slower than those around him and was easy pickings for Mitch Evans and Oliver Rowland.

As he did yesterday, Mortara held off on his Attack Mode until the others were almost out of the additional power, the Venturi driver dropped from P3 to P5 going offline to the activation but at least he managed to activate it on the first go, unlike Frijns a few minutes earlier.

With 25 minutes on the clock, the top four had all returned to normal power mode and it was de Vries, with nearly a two second gap to da Costa, who had really made the most of his boost, with Andre Lotterer and Vandoorne behind them. The Porsche driver’s hold on the final podium position was not to last however as first Vandoorne and then the train of Attack Mode cars behind all made short work of him and he was demoted to P7.

With two minutes of extra power to still use, Mortara had made it past da Costa P2, a feat very quickly copied by di Grassi in the other Venturi, and the Swiss racer had a big gap to try and close up on the leading Mercedes. And indeed there wasn’t enough time, so with Attack Modes for the top ten all run out, the Venturi trailed 1.5 seconds to the race leader, with 20 minutes on the clock. Di Grassi held P3 at that stage, ahead of Frijns and da Costa, though there was not much separating the latter two on track.

As it was yesterday, FanBoost played its part for the Techeetah progression. Da Costa used it to pass Frijns for P4, though the Envision was also demoted by the Mercedes of Vandoorne not too long after.

Heading into the final ten minutes, there were shades of Diriyah around the track as de Vries had checked out at the front with a 2.6 second gap over Mortara, and Vandoorne had also made it past da Costa so that the top four on track were all Mercedes powered.

With six minutes left Oliver Rowland moved past da Costa for P5, for Mahindra’s best result of the year while Vergne had managed to recover a place from Evans, once again a Techeetah getting an assist from the fans to make an overtake.

In the final few minutes Vandoorne managed to flip the podium numbers into Mercedes-EQ’s favour, demoting di Grassi to P4 while Rowland’s great day got downgraded to a good day as he dropped to P7 as da Costa and Frijns pushed past. The two fought all the way to the end but while it was the Envision racer who took the chequered flag first after a dramatic moment between the two, which the stewards looked at but decided no action was necessary on their part.

De Vries took the win ahead of Mortara and Vandoorne, that first corner overtake making all the difference, making it Mercedes’ second double podium of the year and second in Berlin after taking a 1-2 in the final race of season 6, the last of the Berlin triple double-header which was held behind closed doors.

Di Grassi was P4 in the second Venturi ahead of the squabbling Frijns and da Costa. Rowland took Mahindra’s best result of the year so far in P7, ahead of the only point scoring Porsche of the day, Lotterer. Vergne and Evans took the final points places with the second Jaguar of Sam Bird ending just behind his teammate and out of the points.

Cassidy set the fastest lap of the race, but as he finished P21, the point will be going to Mortara who had the quickest time in the top ten.