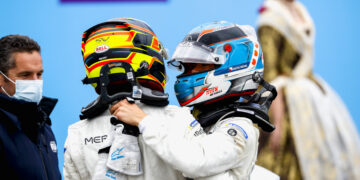 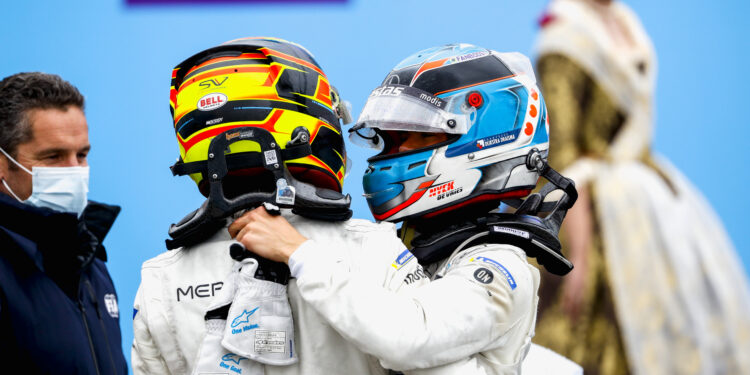 Valencia E-Prix 1 – Nyck de Vries took victory in Valencia as half the field got caught out with energy calculations at the end.

For the third race in a row it was the Mini Electric Pacesetter that led the field away at the start as the rain had only started after the earlier sessions were done, so the drivers didn’t know where the worst of the wet patches would be. That wouldn’t be the last time the Safety Car was called upon however as it made four further appearances to allow marshals to safely extract beached cars from the gravel traps.

The final Safety Car appearance was where the trouble for the majority of the grid began. Da Costa hadn’t slowed the field enough for there to only be a one lap shootout, and that as well as the energy reduction after being behind the Safety Car meant that most drivers were running out of energy.

Starting seventh, de Vries made quick progress to second within the first fifteen minutes. The Mercedes driver held station there for the rest of the race, as polesitter Antonio Felix da Costa was able to pull out a gap after each Safety Car period. The Techeetah though ran out of energy after completing the first of the last two laps after the race went green for the final time while de Vries had enough in the bank and was able to take the chequered flag and his second win of the season.

Following the Mercedes onto the podium for his surprise first Formula E trophy was the Dragon/Penske Autosport of Nico Mueller. The Swiss driver, who only got his first points this season after a best of 12th in his debut year, had been in the wars during the race and had to escape gravel traps twice. Both Mueller and third place Stoffel Vandoorne were the perfect examples of why you never give up in races.

After qualifying on pole, Vandoorne was stripped of all his qualifying times due to a clerical error by Mercedes who wrote the wrong tyre number on the car’s technical passport. As a result the Belgian had to start from the back of the grid, by the final Safety Car Vandoorne was P14 and had just been handed a five second time penalty for forcing Mueller off the track. Through the chaos of the final lap, and the subsequent disqualifications, Vandoorne took the chequered flag in P5 but ended P3, celebrating on the podium alongside his teammate.

Nick Cassidy led an Audi powertrain trio as he took his first race points for Envision Virgin Racing with a fourth place finish. Rene Rast, who had fallen to P21 after he joined Mueller on the Dragon racer’s first gravel excursion earlier in the race, ended as the higher placed Audi Sport Abt Schaeffler in fifth, with Robin Frijns in the second Virgin sixth and takeing the fastest lap point too.

Polesitter and leader until the final lap, da Costa did still manage to bring some points to Techeetah as he was classified seventh while Mahindra’s Alex Lynn, who was running fifth before energy became critical, came home behind him for eighth.

Sam Bird salvaged some points for Jaguar in an uncompetitive day for the British team, the Diriyah race 2 winner ending in ninth, ahead of Lucas di Grassi who had started the race in 21st, right behind Bird, taking the final point.