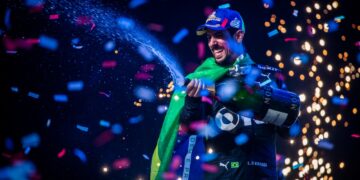 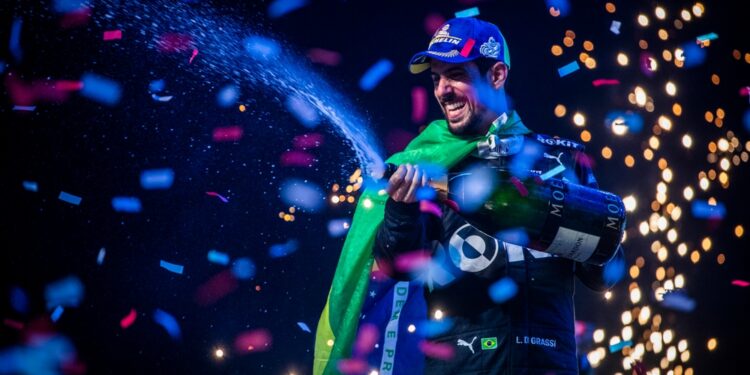 London E-Prix 2 – Lucas di Grassi has now stood on every podium step for Venturi as he beat Jake Dennis to the win while Vandoorne extended his title lead.

There was no stopping Jake Dennis winning from pole yesterday but, after qualifying for the duels to then have his times deleted for impeding and then fighting through from P22 to P9 yesterday, Lucas di Grassi is not someone you would bet against to drive hard and make life challenging for Dennis as he starts alongside him today.

The championship contenders had a nightmare of a qualifying session which left Jean-Eric Vergne as the highest positioned of the four in P9, a place higher than he qualified after Oliver Askew was handed a three place penalty for crossing the pit exit line. Stoffel Vandoorne and Mitch Evans would be starting alongside each other in P13 and P14 while Edoardo Mortara was even further back in P17.

As the lights went out it was once again a good start for Dennis, holding his lead and pulling a car’s length ahead of di Grassi. As per usual there was contact on the opening lap, a few corners later than yesterday with Oliver Rowland getting slightly airborne as he was squeezed into the wall by Askew, and that was the end of the Mahindra’s race as he retired to the pits. Askew was later given a drive through penalty.

There was a slight incident at the hairpin too as Mitch Evans went down the inside of Pascal Wehrlein for P11 as the Porsche locked up, and then Vandoorne tapped the back of the German’s car knocking him slightly off kilter but they all managed to continue.

There were yellow flags at the end of lap 1 as a worse for wear looking NIO 333 of Dan Ticktum pulled into the runoff at T21. Lap 2 saw Vergne stopping at the side of the track which brought out the Safety Car for the first time this weekend. The two-time champion did manage to get going again and made it back to the pits where he bowed out of the race and the championship battle.

The Porsche Taycan safety car departed the track after a few minutes and the race was back with just over 37 minutes on the clock. The first driver to head to the Attack Mode zone was Nyck de Vries, who briefly lost P5 to Sebastien Buemi as he did. Attack Mode today is another unusual, but very welcome change to the norm as it is a mandatory three activations of four minutes each.

Buemi activated his first higher power mode the following lap just as his teammate Maximilian Guenther got squeezed into the wall at the exit of the hairpin by Askew. Evans took advantage of that to get past the two of them for P8. Askew also lost a place to Vandoorne while Wehrlein had also made the most of the issue to pass the Nissan racer and demote him from P8 to P12 in the blink of an eye.

As that hairpin chaos was happening, Antonio Felix da Costa attempted to become the highest placed Antonio in the field as he went side-by-side with Antonio Giovinazzi into T1 but a robust defence from the Dragon racer saw him hold onto his P3 while de Vries slipped past the Techeetah and into P4.

However, just after defending his spot the stewards announced that the Italian was under investigation for overuse of power. Giovinazzi had that issue in group qualifying which led to two of his laps being deleted, though luckily for him neither of those were his best time.

Da Costa ducked into the Attack zone then, getting back onto the racing line ahead of Buemi to hold his position. As the Techeetah’s attempted move on Giovinazzi was being replayed, de Vries got ahead of the Dragon car for P3 just before both Giovinazzi and di Grassi activated their first power boosts, each dropping one position as they rejoined.

It only took a handful of corners for di Grassi to move back to P2 as de Vries had just returned to normal power as the Venturi boosted. The following lap, a third of the way into the race, saw Dennis make the move for his first Attack Mode while de Vries took his second.

Giovinazzi’s hope of points in the race was dashed then as the stewards handed him a drive through penalty for going over the regulated power limit on the fifth lap of the race. The Dragon racer served the penalty entering the pits in P5 and emerging in P18.

With 28 minutes to go da Costa took his second Attack Mode losing P3 to de Vries as he did while Evans had moved past Buemi to P5. At that point Vandoorne was P7 while Mortara was in the final points position without having used any Attack Modes to that point.

With 27 minutes to go Dennis made an error, he went into the activation zone while his first Attack Mode still had a few seconds on the clock. Di Grassi behind activated his second at the same time but while Dennis is still in the lead he will have just forfeited 1-2 seconds going off line for no reason and that means that the Venturi will be close and ready to pounce when the Andretti racer does activate his second.

Da Costa meanwhile was right up behind de Vries and with his final minute of higher power he got the move done on the run to T1. With 24 minutes to go, both the Jaguars took their second Attack Mode from P5 and P9 respectively. After all his work to go P3, da Costa went to the activation zone for the third time giving the final podium spot back to de Vries again.

At the front di Grassi was a dark shadow behind Dennis and was given a clear road to the front when the British driver took Attack number two with twenty minutes to go. Three minutes later the Brazilian took his final trip to the activation zone while the Andretti retook the lead but had only a handful of seconds left before returning to normal power.

Behind them Evans was doing the best he could for his championship hopes as he made it past da Costa for P4. De Vries took his final Attack with fifteen minutes to go and just managed to stay ahead of the Jaguar and hold the final podium place.

At the back of the points places Mortara, who had finally started using his Attacks and was nearing the end of his second, tried to get past Bird for P9 as Buemi and Wehrlein fought and locked up just ahead of them.

The Venturi driver locked up himself and spun into the T1 run off, losing two places, just as the stewards announced he would be getting a five second penalty for colliding with Guenther earlier in the race.

Evans took his final Attack with 12 minutes to go, remaining in P4 and setting his sights on the cars ahead, just as Vandoorne made it past da Costa to line up behind his Jaguar title rival.

Despite Dennis’ best efforts he wasn’t able to shake di Grassi to given himself enough of a gap to take the last of his mandatory Attack Modes so with eight minutes to go Andretti told him to just go for it and the lead was once again surrendered to di Grassi while de Vries had closed up and was as far behind Dennis as the Brit was to the Venturi. Evans in P4 was a few more car lengths further back and closing.

Thanks to the early Safety Car there would be three additional minutes added to the race time. Just as they started into the additional time there was disaster for Evans as he suffered a technical problem which saw him lose power and head into the chicane run off. He did manage to get some power back and was able to bring his Jaguar back to the pits where he retired.

Di Grassi had pulled a solid gap at the front while in P2, Dennis had de Vries right behind him looking for any slight mistake to take advantage of. There was delight for di Grassi and Venturi as he took the chequered flag having worked his way up from a P3 in Diriyah, a P2 in New York and now his first win with the Monegasque team.

Dennis held out from de Vries to take P2, as well as bagging the point for fastest lap in the top ten, while Vandoorne extended his championship lead with a P4. Da Costa in P5 was the sole Techeetah to make it to the flag while Buemi took P6 for Nissan.

Envision’s Robin Frijns came home in P7 just ahead of Bird in the lone remaining Jaguar while Sergio Sette Camara, after starting P19, finally broke Dragon’s duck this season with two points for finishing P9. The final point of the day went to Wehrlein.