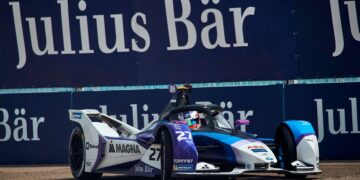 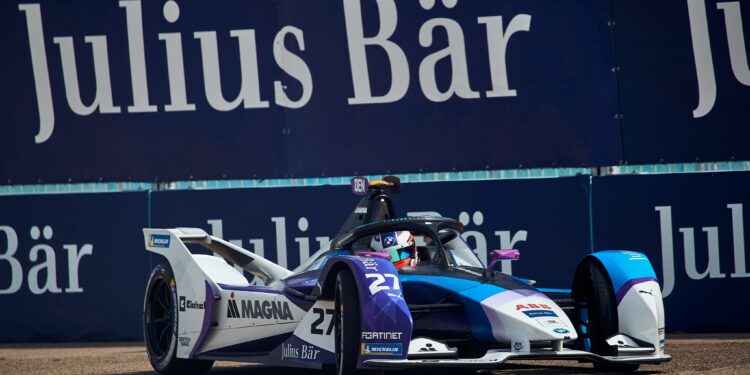 Berlin E-Prix 1 – Jake Dennis was once again the fastest driver in Berlin, topping the second practice session for BMW i Andretti.

It was a pretty quiet half hour of practice ahead of today’s penultimate round of Formula E’s first World Championship. A few lock ups and slides while Envision Virgin Racing’s Robin Frijns tapped the wall early in the session but it didn’t appear to have had a negative effect on his car.

Dennis had been the pacesetter in the first few minutes of the session but it was during the flurry of quick laps at the end which saw him secure the top spot with a 1:06.228, over seven tenths faster than his chart-topping best from FP1 yesterday afternoon.

Lucas di Grassi, in Audi’s final weekend with Formula E, ended the practice second but was still well off the BMW’s time. The gap between the two, 0.154, larger than what covered the whole of the top ten yesterday.

Championship leader Mercedes EQ’s Nyck de Vries was third, 0.319 off Dennis, while his current closest title rival, Frijns, was fourth with a 1:06.625. Pascal Wehrlein was the best of the Tag Heuer Porsche cars and was just over four tenths off the best time so far this weekend.

The first into the 1:06’s today had been Maximilian Guenther, the BMW driver had also been the first to put in a full power lap but didn’t have the best first sector and so ended in sixth with a 1:06.646.

Stoffel Vandoorne was seventh, 0.465 off the leading BMW while the two Techeetahs ended the session behind him, reigning champion Antonio Felix da Costa with a 1:06.711 while two-time champion, Jean-Eric Vergne, was just 0.003 second further back. Norman Nato rounded out the top ten with the Rockit Venturi driver 0.002 seconds slower than Vergne.