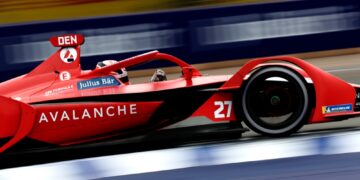 Dennis fastest in the final practice before qualifying in London

Dennis fastest in the final practice before qualifying in London 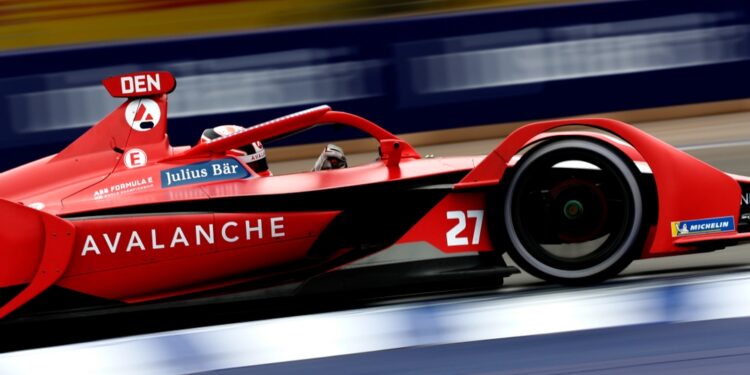 With such limited practice time before qualifying it’s no surprise that all cars were out pretty swiftly as the final thirty minute session kicked off. In the opening practice yesterday the Dragon/Penske cars looked very strong with Sergio Sette Camara ending with the fastest time, a 1:14.487, while Antonio Giovinazzi was a couple of tenths slower in P4.

Today the first time on the board was a 1:26.244 by Mitch Evans though the times were well into the 1:15s a couple of minutes afterwards. Evans was also the first to break into the 1:14s and Sette Camara’s time from yesterday evening was soon to be toppled and after ten minutes of the session Andretti’s Jake Dennis was top of the charts with a 1:14.270.

Just before the halfway point of the session the two Mercedes cars picked up the pace with first Stoffel Vandoorne making it into the 1:13s before Nyck de Vries shaved a tenth and a half off the Belgian’s effort to take P1 with a 1:13.767.

The session was Red Flagged with just less than nine and a half minutes on the clock for an incident at T6/7, for Dan Ticktum. TIcktum was shown walking away from the area but his NIO 333 seemed to be in a very awkward area as there wasn’t even a camera able to get footage of the stranded car or what had actually happened.

The car was cleared and the session was able to resume with three minutes to go and while there wasn’t much improvement for those who had been at the top of the times so the Mercedes and Max Guenther who had been the top three all fell back as others progressed.

The chequered flag brought the session to an end and it was Dennis, the inaugural winner around the ExCeL last year, who ended P1 with a 1:13.661 while Mahindra’s Oliver Rowland, was 0.082 seconds slower.

Andre Lotterer, who had had a spin at the hairpin earlier in the session, was the best of the Porsches taking P3 after setting a time only a further 0.007 seconds off Rowland’s effort. De Vries didn’t improve on his pre-red flag time and ended in P4.

Lucas di Grassi was P5 for Venturi with a 1:13.807 a couple of tenths quicker than Evans in P6 who had set a time just 0.002 seconds faster than what Guenther had managed in his Nissan e.dams.

Vandoorne was P8 while yesterday’s time setter, Sette Camara, set a 1:13.951 for P9. The Dragon racer’s teammate just failed to make the top ten in the session as Andretti’s Oliver Askew out paced Giovinazzi by 0.001 seconds to set a 1:13.993.