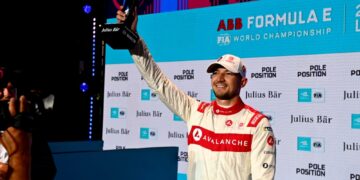 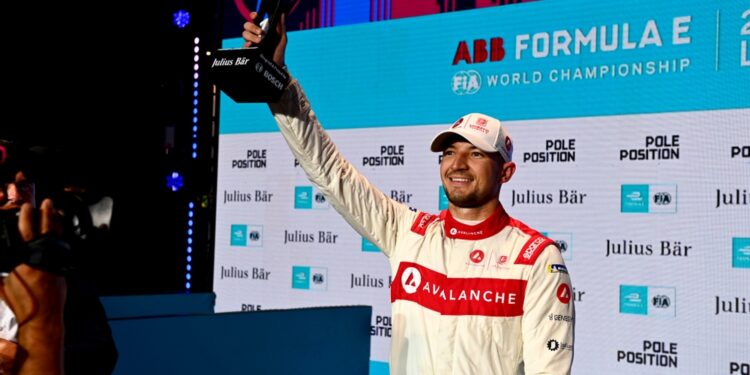 London E-Prix 2 – Jake Dennis does it again, securing pole for the second London race while none of the title contenders made it to the duels.

Sergio Sette Camara was the first to take to the track for the opening qualifying group and so he was the first to then put a time on the board, a competitive 1:14.460. Once all eleven drivers had set their times it was Jake Dennis at the top with a 1:13.558 while a lock up for Edoardo Mortara saw him last with a 1:14.279.

The track emptied then as has become customary before the last runs and along with Dennis, the other drivers in the duel spots were Sam Bird, Oliver Askew and Stoffel Vandoorne.

Mortara was the first to return to the circuit while Bird was at the back of the train. While the Venturi driver set the fastest sector one of the session, all those behind went quicker as the track improved and the Swiss racer could only manage a 1:13.745, a time equalled by Sette Camara, which left Mortara in P9.

It wasn’t a great final run for Vandoorne either as he ended P7 after a lock up at T1. It ended with Dennis on top again with a 1:13.279 while Antonio Felix da Costa, Nyck de Vries and Askew will also continue on to fight over the top eight places.

Antonio Giovinazzi saw to it that Dragon were once again the first out of the pits and he was the only one not to do a warm up lap initially so he started with a 1:14.644 though that was quickly shuffled down when the others went for it. Lucas di Grassi had the best of the banker laps with a 1:13.379 however an incident between himself and Mitch Evans was noted by the stewards, a worrying notice given the Venturi racer had all his times deleted yesterday after impeding Evans and Robin Frijns.

Before the final runs it was di Grassi, Nick Cassidy, Jean-Eric Vergne and Pascal Wehrlein who were in the coveted top four spots. Cassidy was first to head out while Giovinazzi was last on circuit.

While di Grassi and Cassidy remained in the duel positions, the Brazilian going top with a 1:13.006, Evans missed out and ended P7 as Vandoorne did in group A. Vergne who was in P4 behind Sebastien Buemi looked like he was going to be the only one of the championship contenders to go on to fight for pole, however a fantastic lap from Giovinazzi jumped him into P2, which pushed Vergne to P5.

Although the initial gap between the two was just over a tenth, Dennis has been on form all weekend so there was very little Buemi could do to hold the charging Andretti back. It was a strong lap for the Nissan racer, a 1:13.197 but Dennis’ 1:12.661 means he will move to the semi finals.

A mistake from Cassidy at the start of the lap handed a big advantage to da Costa and unfortunately for the Envision racer there was too much to try to pull back and so the Techeetah will progress.

The Dragons have been on incredible form this weekend with Giovinazzi having half a tenth advantage at the start and there was even less after sector two but a lockup for de Vries in the final sector gave the Italian all he needed to knock out the Mercedes by 0.063 seconds.

Although di Grassi had the initial advantage it was a walkover for the Venturi racer, the first ever in the duel format, as Askew hit the wall and slowed due to damage in sector one. Di Grassi was the second car on track so he knew he would be progressing but he continued to push as set the closest time to Dennis’ effort, a 1:12.686.

With Dennis ahead by almost a tenth after the first few corners, that gap just continued to grow despite da Costa’s best efforts as Dennis once again put in a faster lap, this time a 1:12.649.

There was over a tenth and a half advantage to di Grassi at the start, and while the Dragon racer did set more similar times in the second and third sector, there was nothing Giovinazzi could do against the charging Brazilian who went 0.008 seconds faster than Dennis. Third on the grid however will be Giovinazzi’s best qualifying of the season and will give Dragon another chance to get their first points on the board.

There was barely anything in it through the first sector, Dennis head by just 0.012 seconds, the Andretti driver pulling just over a tenth after sector two but unfortunately for Venturi, di Grassi made a mistake in the final sector and lost a second, so he will be P2 on the grid.

Giovinazzi will line up P3 on the all-Antonio row two with da Costa beside him. De Vries will be P5 while Buemi lines up beside him in P6. Cassidy and Askew will share row four while Guenther and Vergne, the highest placed of the championship contenders, round out the top ten.

Vergne’s rivals Vandoorne and Evans will start alongside each other on row seven while Mortara will be a few places further back in P17.

A delighted @Anto_Giovinazzi will start P3 in London today!