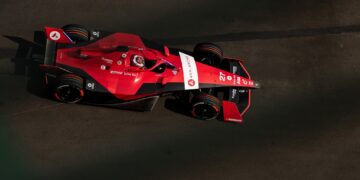 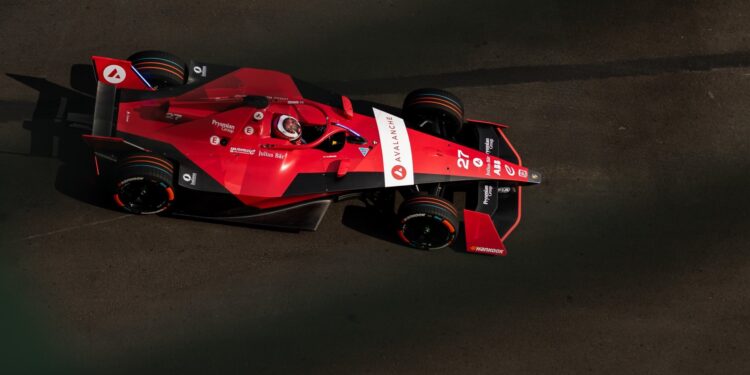 Mexico City E-Prix – Jake Dennis took a dominant win in Mexico for Andretti after getting past polesitter Lucas di Grassi in the early stages.

The first race of season 9 which is also the debut of the Gen3 car, Formula E’s most technologically advanced car yet, was led off by Lucas di Grassi, winner of the inaugural E-Prix in 2014, 101 races ago.

Di Grassi’s Mahindra was joined on the front row by Jake Dennis, the Andretti driver was the fastest in qualifying but, after damaging his front wing in the quarter finals and not being allowed to repair it, the Brit’s car couldn’t carry him through to another victory in the final.

As the race started it was an incident free first corner with the top six all holding station, Sacha Fenestraz getting the better of Sebastien Buemi for P7, but the Yellow Flags were soon being waved before the Safety Car was called for Robin Frijns’ stranded Abt Cupra. The Dutch driver going into the back of Norman Nato’s Nissan, the French driver pitting and retiring after the contact. It was later revealed that Frijns had broken his left wrist in the incident and would need to undergo surgery.

This season races are back to being completed to a number of laps rather than to 45 minutes +1 lap as it had been for the past few years, but additional laps will be added if enough time has been spent under Safety Car of Full Course Yellow conditions.

Lap five saw the E-Prix back to green flag race but it wasn’t long before the Yellow Flags were back out as Sam Bird’s Jaguar ground to a halt with what he thought was a drive shaft issue. The Safety Car was back in the lead on lap 7 while the marshals cleared the stranded car. After a season to forget last year, Bird’s bad luck hasn’t seemed to have run its course yet as he’s been plagued with issues all weekend.

The Safety Car came back in and the race was back on as lap 10 started. The first Attack Mode activations were from Nick Cassidy and Stoffel Vandoorne in P13 and P14. This season the cars have four minutes of the Attack Mode boost that can be used in whatever combination of minutes they choose. For the first activations Cassidy chose a 1-3 format while Vandoorne did the opposite.

The lead changed on lap 12 with Dennis getting past di Grassi when the leader made a slight mistake, and while the Brazilian tried to fight back, he also had Jake Hughes and Andre Lotterer right on his tail and looking to progress. While that happened Dan Ticktum, who was in P6, was handed a Drive Through Penalty for using too much power in his NIO 333.

Lap 16 saw di Grassi take a minute of Attack Mode, given the four cars behind had all just used a minute or two of their own, while Dennis was well out in front with over a four second gap to the cars behind.

Edoardo Mortara’s race ended on lap 18 with the Swiss racer losing the rear of his Maserati at the exit of the first corner it was into the barriers for him. That meant that the Porsche Taycan Safety Car was back out for a third time, knocking Dennis’ lead back down to less than a second. Lap 21 saw the race back on again and it didn’t take the Andretti driver more than a handful of laps to get his four second buffer back.

There was a podium position change on lap 27 as di Grassi and Hughes both took their final 3 minutes of Attack Mode and Wehrlein slipped past the McLaren for P3 as he was offline in the activation zone.

While Buemi in P6 had been investigated for potential jumpstarting the race, the stewards decided there was no further action needed on that but Ticktum, who had already dropped well back after having serving a drive through, was handed a 10 second penalty for gaining and advantage by leaving the track. The Brit will be subject to another investigation after the race as he, Fenestraz and Oliver Rowland will be looked at for potentially breaching Safety Car procedure.

Lap 29 and Wehrlein was up another step on the podium, passing di Grassi who was not in as good a position on energy as the cars around him.

On lap 34, Race Control announced that there would be five extra laps added to the race due to the multiple Safety Car periods, so it would be a 41 lap race rather than 36. On lap 35 as Hughes tried to make a move on di Grassi, Lotterer in P5 saw an opportunity to make up a position so the British rookie was both under pressure from the Andretti behind and from his team who were giving him a hurry up to make the move on di Grassi.

While di Grassi was defending for his life and doing everything he could to make his Mahindra feel much wider than it is, Buemi had caught up to the rear of Lotterer’s Andretti to join the fight.

There were Yellow Flags flown for the last few laps, some to cover Rene Rast, who had pulled off after contact with Rowland, and others due to debris on track, that all assisted di Grassi as Hughes wasn’t allowed overtake at those points.

While Antonio Felix da Costa had joined the P3 train, it was Lotterer who won the battle there getting P4 from Hughes in the dying moments while di Grassi managed to hold on to his podium.

It was a Porsche powered 1-2 with Dennis taking the win nearly eight seconds ahead of Wehrlein. Di Grassi was P3 ahead of Lotterer and Hughes, while Buemi was P6 ahead of da Costa. P8 went to Jaguar’s Evans while Cassidy was P9 and the reigning champion, Stoffel Vandoorne took the final point.

The fastest lap also went to Dennis, a 1:14.195, while Ticktum was the final classified runner after being handed a second Drive Through Penalty for once again gaining an advantage by going off track.