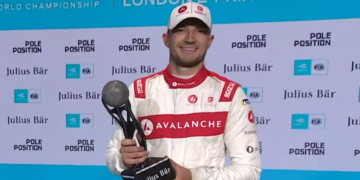 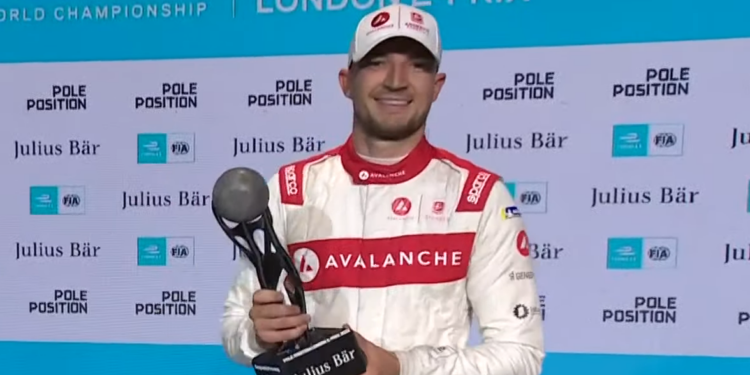 London E-Prix 1 – After topping FP2 and group A, Jake Dennis put in the fastest time of the day in the semis before defeating Stoffel Vandoorne in the final.

The fastest man from FP1, Sergio Sette Camara, was the first to take to the track and put in a speedy opening effort with a 1:14.968. After all drivers put a proper time on the board it was Nick Cassidy on top of the charts with a 1:14.246. The Envision racer was on great form in New York last time out, winning the duels on both days and taking victory in race one, though a grid penalty on Sunday saw him having to start from the back rather than pole again.

Halfway through and as the track emptied for tyre changes and final run preparation Cassidy’s time was still the best while Sette Camara had improved to P2, less than two hundredths off, while Stoffel Vandoorne and Mitch Evans provisionally held the duel spots.

Oliver Turvey was the first to return to the track while Pascal Wehrlein was last out, almost a lap behind the rest. It was too far behind though as the Porsche driver failed to make it past the line before the chequered flag. Lucas di Grassi seemed to have been causing some mischief with the stewards announcing two investigations for the Venturi driver for impeding Evans and Robin Frijns.

The final run did not go smoothly for Evans either as the Jaguar driver made a mistake in sector one which saw him end the session in P8 while at the front Vandoorne made the most of the final run to set a 1:13.796 while Sette Camara slotted into P2 with Cassidy and the under-investigation di Grassi filling in the final progression positions.

Techeetah’s Antonio Felix da Costa was the first to emerge from the pits, just getting out ahead of the other Antonio on the grid, Antonio Giovinazzi. Da Costa put a 1:14.943 on the board before the red and white Dragon of Giovinazzi went just over a tenth quicker.

Once the first competitive times were set it was Andretti on top with the fastest racer from FP2, Jake Dennis, setting a 1:14.073 while reigning champion Nyck de Vries was in P2, the other Andretti of Oliver Askew in P3 while Andre Lotterer was provisionally in the final duel position of P4.

After his incident at the end of FP2, Dan Ticktum did make it onto the track at the start of the session but returned to the pits after setting a 1:23.932. Whatever reason he had to pit before putting in a competitive time must’ve been solved as the NIO 33 driver was the first to return to the track for the final runs, with da Costa the last on track while Giovinazzi seemed to have an issue as he remained in the pits.

A messy lap from Mortara saw him fail to improve from his P5 time but he wasn’t the only one as apart from the top two, Dennis and de Vries, no one else seemed to put in faster times. The Andretti racer’s 1:13.846 saw him in P1 with de Vries second, while Askew and Lotterer remained P3 and P4.

There was drama from Group A too though as di Grassi’s times were all announced to have been deleted for his impeding of other drivers. That meant that Nissan e.dams’ Maximilian Guenther would be taking his place in the duels.

Duel one was a very closely fought affair with less than a tenth in it over the first two sectors with Vandoorne just having the advantage, but in the final sector it all went the Mercedes driver’s way as he pulled out nearly three tenths over Lotterer.

The second quarter-final was a very different beat to the first with Sette Camara going like a rocket from the off, almost a quarter of a second faster than Askew in the opening sector and never losing his advantage to set a time better than even Vandoorne.

Like the Dragon, de Vries was definitely the quicker from the start though it looked like Cassidy might’ve made some contact with the wall in sector one. The Envision racer did manage to pretty much equal the reigning champion in sector three but he wouldn’t be getting the chance to equal the best qualifying runs of three poles in a row.

As fastest in FP2, fastest in his group, there was no real surprise that Dennis was then also quicker in each sector compared to Guenther, who was experiencing the duels for the first time. The Andretti racer set the better times in each sector to set the best time of the quarter-finals and defeat Guenther by over half a second.

The first of the semi-finals saw Sette Camara most likely being cheered on by all the other title contenders as it would make life easier for them if the Brazilian could prevent Vandoorne from taking pole and extending his championship lead. The Mercedes however put pay to those hopes very quickly, going almost two tenths quicker in the opening sector and then pulling out more time over the remainder of the lap to slay the Dragon by over three tenths.

De Vries was first on track but it was Dennis who just had the opening advantage with less than half a tenth in sector one. The two also set similar times in sector two but it was the third sector that saw the Andretti racer nearly two tenths faster, setting the fastest time of the day, a 1:13.005, and prevented Mercedes from locking out the front row.

Vandoorne was first on track having had the slower of the semi-final times but it was Dennis with the initial, tiny advantage as the two set very similar sector one times. It was all Andretti in sector two with the British racer two tenths up and while the current championship leader had the slightly better end to the lap it wasn’t enough to deny Dennis a home pole.

With the faster of the losing semi-final times de Vries will start ahead of Sette Camara on row two while P5 to P8 will similarly be filled by Askew, Guenther, Cassidy and Lotterer in that order.

As the first driver to miss out on progressing from Dennis group, Mortara will line up in P9 while Frijns will be alongside him on row five.