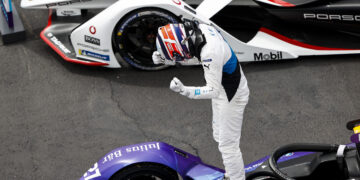 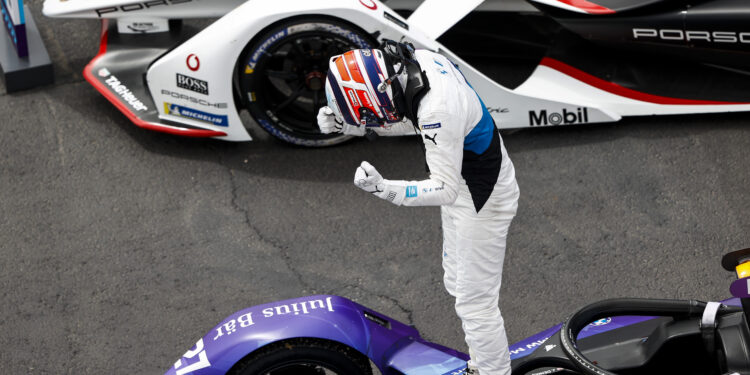 Round six of the season saw only the third standing start of the season as the cars lined up on a dry track for the first time since Diriyah. As the lights went out, the two leaders, Jake Dennis and Alex Lynn held positions but it was an inter-team battle behind them as Oliver Turvey went side-by-side with Tom Blomqvist before getting past into third while the NIO 333 3-4 didn’t last more than a few corners as Blomqvist went wide allowing Norman Nato, who had already to slip by.

Jean-Eric Vergne, today’s birthday boy, musceled past Andre Lotterer, the Porsche had started 5th but lost to Nato as well as ex-teammate Vergne on the opening lap. A few laps later the Techeetah driver was into P5 as he got past Blomqvist with the NIO 333 dropping to 7th as Lotterer got through not too long after.

Turvey meanwhile was holding his own in 3rd and was the first of the top drivers to head offline and activate Attack Mode. The NIO 333 initially fell back to fourth but when the rest of the top five took their first activation the following lap Turvey moved into second. Unfortunately the Attack Mode undercut didn’t pay off in the long run as the NIO 333 was a sitting duck for the other drivers and he steadily lost positions to the faster cars.

The first non-Attack Mode change at the front was when second placed Lynn got tagged at the rear by Nato. The Mahindra got out of shape as a result, running through the gravel and falling back to P6. Nato was later handed a 5 second time penalty.

After starting from P14, Rene Rast made quick progress up through the field for Audi. With just over fifteen minutes to go, the German almost made it past Nato into second but ran out of Attack Mode. With Nato’s penalty, the Audi driver was in line for second but fell back in the final few minutes losing places to Lynn and Rowland.

As the clock was counting down the final minute of the race, BMW got on the radio to Dennis telling him to slow down in order to run the time out so he could do a flat out final lap instead of having two and potentially another end like yesterday. The British driver took his first Formula E win and after Nato’s penalty was applied, was joined on the podium by Lotterer, who finally takes his first points of the season, and Lynn, with the Mahindra also taking the fastest lap point.

Rowland also benefited from the Venturi penalty, boosting him to 4th for Nissan e.dams while Nato ended P5. Rast finished P6, which coming from fourteenth in a straight forward race, was very impressive. While initially making progress, Vergne finished where he started, in P7.

Turvey was the only NIO 333 to manage to hold onto a points finish with P8, while Venturi got their first double points finish with Mortara in P9. The final championship point went to Lucas di Grassi, who also made great gains for Audi as he gained twelve places in the race from his initial starting spot of 22nd.