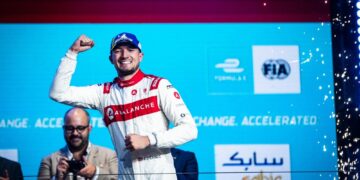 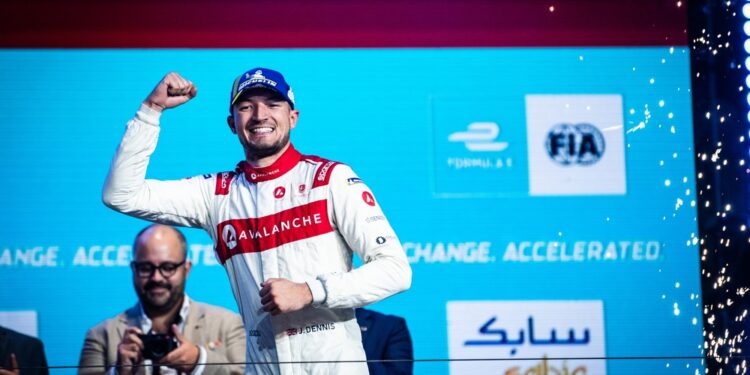 London E-Prix 1 – There was no beating Jake Dennis today, with the Andretti driver topping each session and taking points for pole, fastest lap and the win.

The inaugural winner around the ExCeL London track, Jake Dennis, lined up on pole with championship leader Stoffel Vandoorne alongside him and the Andretti driver managed to hold off the charging Mercedes on the run to the first corner.

There was chaos at the second corner as Sam Bird and championship challenger Edoardo Mortara made contact, after the Venturi driver was sandwiched between other cars and had nowhere to go, which left Bird stranded at the side of the track, a situation which has unfortunately now happened at each of the Gen2 era races in London. The Jaguar racer was quick to get out of the car and start pushing it behind a barrier before the pack made it to lap 2 so there was no full course yellow and the detached pieces of carbon fibre remained scattered on the track.

Mortara had taken a lot of damage in the collision and had to pit at the end of lap 1 to change his front wing and inspect the car for potential suspension damage. The Venturi driver returned to the track but was almost a lap behind.

Lucas di Grassi in P17 was the first to activate Attack Mode, only a handful of minutes into the E-Prix. This time Attack Mode breaks the usual race one mould as there will be two activations of six minutes each (rather than the usual two by four minutes). The Brazilian started from the back of the grid after having his qualifying times deleted after impeding other drivers in group A.

At the front Sergio Sette Camara, who had qualified P4 being defeated in the duels by Vandoorne, made a lunge down the inside of Nyck de Vries at turn 1 to slip into the final podium position. On the same lap the two Techeetahs had an incident with Jean-Eric Vergne locked up heading towards the hairpin and hit the back of his teammate Antonio Felix da Costa. That less than ideal team work allowed Sebastian Buemi to get past them to P10.

With 37 minutes to go, Robin Frijns in P9 was the first of the top ten to head to the activation zone. Though his efforts to move forward would be hampered as the cars around him all took their first activation the following lap. The big loser at that point however was Buemi who had fallen back to P12 after his activation as the two Techeetahs got back past.

De Vries and Oliver Askew in P4 and P5 took their activations with 34 minutes on the clock and the three all followed suit on the next circulation. Dennis and Vandoorne held station but de Vries managed to slip back past Sette Camara. That left Nick Cassidy in P6 and Vergne in P10 the only points runners to still have two activations waiting.

As others started returning to normal power mode, Cassidy started an alternate strategy and activated his Attack Mode. With just over 26 minutes to go, Buemi was being swamped with first Evans lunging down the inside of the Nissan driver for P11 as the cars turned back to the indoor section and then at the first corner Vergne and Buemi made contact and the Techeetah dropped from P13 to P16. The Swiss racer was later handed a five second penalty for the collision.

At the front the top four had pulled a bit of a gap on Askew in P5 so de Vries and Sette Camara were able to hold their positions as they activated their second Attack Mode. With their own gap to P3 the top two were then able to head to the activation zone the following lap and rejoin ahead of their competitors.

As that happened, the second retirement of the race was another of the British contingent as Oliver Rowland slowed on track, dropping back from a mid-teen position to retire in the pits.

As the clock ticked into the final fifteen minutes, it was all still static at the front with Vandoorne still following Dennis around the circuit while di Grassi in P11 had just started his second Attack Mode and was attempting to close in on Frijns to get into the points places.

While the Venturi driver made his move and demoted the Dutchman from the points, a few cars ahead the other Envision was moving the opposite direction as Cassidy too was in his second Attack Mode with those ahead in normal power. With twelve minutes to go, he was on the move first getting past Askew for P5 and with Sette Camara right ahead it was only a few more corners before he had vanquished the Dragon and Cassidy set his sights on the podium with de Vries two seconds further up the road.

With just over five minutes left it all started falling apart for Sette Camara who had been holding P5, and looked set to finally get some points for Dragon this season, losing places to both Askew and Guenther before Evans also got through a few corners later. In the final two minutes da Costa also got through but the lap was just that bit too long for the Brazilian and he ran out of energy at the end and stopped on track before the chequered flag.

At the front Dennis had pulled a bit of a gap to Vandoorne with the two looking to be very secure in their position but it was decidedly different for de Vries who had Cassidy right on his rear wing and the two battled their way through the final few laps with the reigning champion defending very hard against the green machine to hold onto a double podium for Mercedes.

So it was Dennis who repeated his race one win from last year but this time also starting on pole and being the first person at this track to convert it, and he also set the fastest lap so it was maximum possible points for the Andretti driver. Vandoorne and de Vries joined him on the podium with Cassidy P4.

Askew took the flag in P5, his best result in the series so far, while Evans did his best to make up for a bad qualifying with a P14 to P6 drive. Da Costa took P7 while Guenther also ran out of energy and lost a couple of positions before he coasted to the line in P8. It was a solid recovery for di Grassi too, coming through from the back of the grid to P9 though he and Venturi are still not happy with the stewards decision to delete all his qualifying times for some impeding incidents. The final points place went to Porsche’s Pascal Wehrlein.