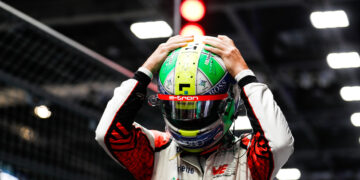 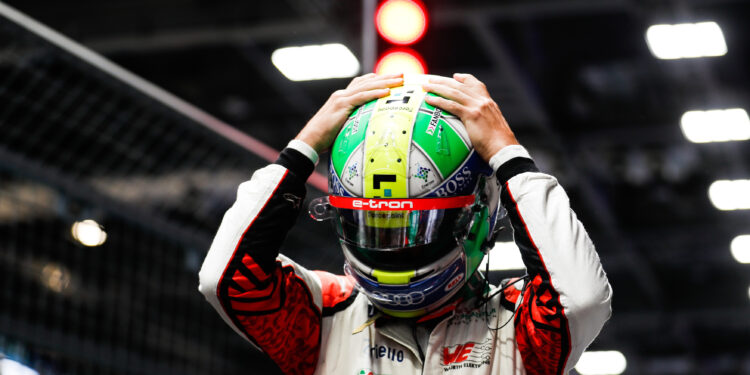 London E-Prix 2 – After their cheeky attempt to gain positions in the race, Audi and Lucas di Grassi have been penalised by the stewards.

Half way through the race, while the cars were circulating behind the Safety Car for the second time, Audi Sport Abt Schaeffler saw an opportunity to make something more of di Grassi’s P8. The Brazilian was called into the pits to briefly stop in his pit box and then continue along the pit lane and rejoin the train of cars behind the Safety Car.

Audi had noticed that the Mini Electric Pacesetter was setting a very sedate pace and that the speed limit in the pit lane would see their driver moving quicker. The gamble did initially work out as it saw di Grassi catapulted from P8 to P1, a position he held until the chequered flag.

Explaining the situation after the race, Audi’s Team Principal, Allan McNish said: “We’ve quite a unique situation here in London that the pit lane is quite short and also the Safety Car was unusually slow and in reality it was quicker to go through the pit lane which the regulations do allow: Lucas comes to a stop and accelerates out.

“We were quite surprised how much time he actually gained as it turned out but unfortunately the stewards deemed that he didn’t stop the car sufficiently enough by stop, stop normally. We believe he did, they believe he didn’t.

“We’re visually standing here and they’re looking at data and so from that point of view the cameras you saw were actually directly behind this sign so it’s very difficult to see and clearly our guys were looking at it very clearly. We understand and know the regulations extremely well and we abide it, we believe by the regulations. However the judges are fact, in this case, and the stewards believe otherwise.“

Within the final ten minutes the stewards announced that di Grassi had been given a drive-through penalty for his actions and McNish was seen running to talk to them and argue the case. Di Grassi wasn’t informed of the penalty and, as such, continued with his race leading the stewards to then give him a black flag for ignoring their instructions.

As the data from Formula E cars isn’t available to the teams or officials in real-time, that made life difficult as it was a case of Audi saying he complied with the regulations while the stewards claimed otherwise but neither could back anything up.

“We haven’t got the data from the car,” McNish explained. “That’s one of the issues with Formula E is we’ve got to wait until the car comes back to be able to download the exact data so we’ll be doing that in due course.”

Despite being shown the black flag, di Grassi was still classified in the provisional results with them placing him P8 after converting his drive-through to a time penalty. It was only hours later that the disqualification was made official.

Footage was later posted by Formula E showing the Brazilian’s pit lane excursion from the Audi garage and that as well as data showed that it was marginal but the car didn’t come to a complete halt, and so wasn’t an unorthodox but acceptable piece of thinking.

UNSEEN FOOTAGE!@Lucasdigrassi almost pulled off an audacious move after nipping through the pitlane to grab the lead during a safety car period.

But it was ruled he didn't come to a stop before exiting the pit and was black flagged for declining a drive-through penalty. pic.twitter.com/DeXEI11K0V

Di Grassi took to Twitter to give his opinion on the “Everything we did today was clearly permitted by the rules of the championship. We only could do it if the safety car was in a lower speed than the pit-lane speed limit, otherwise I would lose positions.

“It was a bold, risky move but I’m fully behind my team when the decision was taken. The penalty was correct applied because the vehicle (the wheels did reach 0) didn’t go to full 0 km/h AFTER the data was analyzed in detail, as it was so close.

“I was only informed of the penalty after the checkered flag, via radio.”

The Stewards were however decidedly unimpressed with Audi’s decision not to inform di Grassi of the initial penalty and see that he served it. The team were handed a €50,000 fine as a result, but will only have to pay €5,000 of that as the remaining €45,000 is suspended for the remainder of the season provided they don’t repeat those actions in the final rounds.

The decision document for the fine read: “The Competitor thought that the given penalty (Drive Through) was wrong, therefore they did not inform the driver about that and did not instruct him to serve it. This behavior is not acceptable. It is not up to the Competitor to decide which penalty is wrong or right.”

Di Grassi’s disqualification means that neither Audi scored today after Rene Rast ended at the side of the track in the early stages after a fight with Sebastien Buemi. It also means that Jake Dennis moves up to P9 while Joel Eriksson gets P10 and his first Formula E point after replacing Nico Mueller at Dragon/Penske halfway through the season.