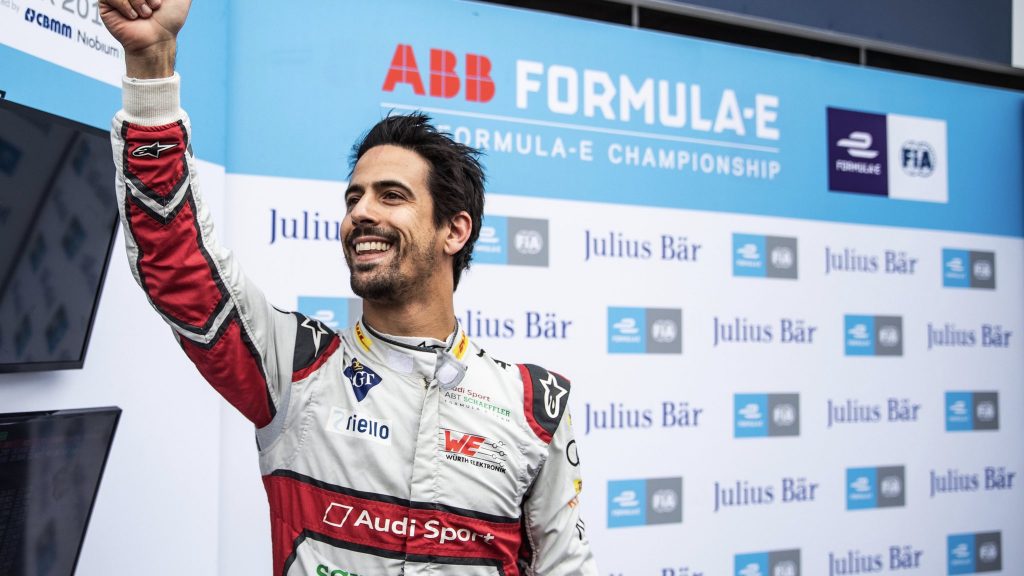 Starting third it took di Grassi less than 10 minutes to pick off HWA Racelab’s Stoffel Vandoorne and Nissan e.dams’ Sebastien Buemi before heading off into the distance to secure the second straight home win for Audi Sport Abt Schaeffler.

Talking to Vernon Kay on the grid, di Grassi had said that that it would be important not to waste energy and attacks had to be made within energy targets. He showed that that was as easy done as said when he had no trouble sliding up the inside of his rivals at turn 6 in the first part of the E-Prix.

The Brazilian driver was expecting to be strong in the race, having made it to Super Pole from group one it was obvious the car did have pace, and once he was in free air at the front of the pack he pulled out a gap which at one point was 11 seconds.

With his second pole of the season Sebastien Buemi managed to convert this one to his first podium of the season. Buemi dropped to third for a time after Antonio Felix da Costa passed him as he moving off line to activate his first Attack Mode.

For once though it was Fanboost that had a big impact on the Swiss driver’s race, it allowed him an easy route to retake his position from da Costa and taste his first podium champagne of the year.

After complaining about a terrible car during yesterday’s Free Practice sessions, Jean-Eric Vergne was praising his team for the overnight fixes which secured him an eight place start and allowed him to charge through the field to secure third place and more points for his and Techeetah’s championship leads.

Da Costa had made it to second at one point in the race but couldn’t hold back Buemi or Vergne as they completed a champions only podium leaving the BMW i Andretti driver in fourth.

A home podium for HWA wasn’t to be as Vandoorne could only bring it to the chequered flag in fifth but it is their second best result of the season.

Daniel Abt couldn’t relive last year’s glory and had to make do with sixth, finishing right on Vandoorne’s tail, for Audi’s highest points haul of the season so far.

After six races without a point, Alexander Sims converted his 11th place into a solid seventh and BMW’s first double points finish. Oliver Rowland followed Sims up through the field, picked up a warning from the Race Director for his overtaking but finished eight in the end.

It was a tough day for Envision Virgin Racing team with Sam Bird being their higher starter in 13th, he put in some great overtakes but could only manage to make it to ninth.

Rounding up the Top 10 was Mahindra’s Pascal Wehrlein. The German gets a point in his home race but the team just didn’t seem to have the pace fr anything else this weekend.

It had been looking so good for Jaguar’s Alex Lynn, he started fifth and was holding his own in the top 10 when on lap 23 his rear axle seized as he was coming our of the last turn, leaving him stranded on the track and out of the race.

The only other non-finisher of the E-Prix was the other Techeetah of Andre Lotterer. The German had fought his way up to 11th after starting on the last row but battery issues on lap 28 meant he had to retire from his home race.