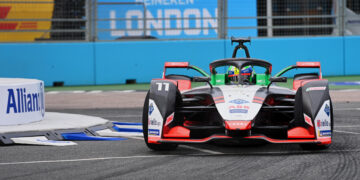 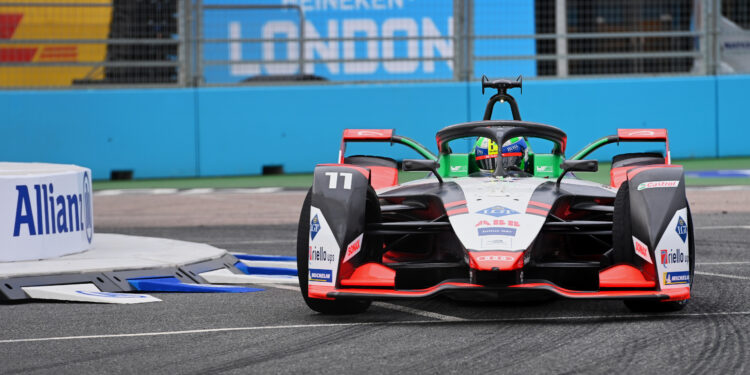 London E-Prix 2 – Lucas di Grassi put Audi Sport Abt Schaeffler on top of the pile for the only practice ahead of today’s second London race.


Although practice was once again held under overcast skies, today the drivers were rewarded for their early start with a bone dry track to run on. Within fifteen minutes of the start the lap times were quicker than had been seen on the ExCeL track so far.

Aside from some lockups it was a good session for the teams as no bodywork was harmed during the 45 minutes. In the final few minutes, as the full power laps were coming thick and fast, it was di Grassi who made the most of it and almost broke into the 1:19s, ending the practice with a 1:20.001.

Yesterday’s winner, Jake Dennis, was second quickest this morning putting in a time 0.232 off of the Audi’s best. Nissan e.dams’ Oliver Rowland who was disqualified from his P10 finish yesterday after the team made an error which saw the car fail to lift off the power and coast once he’d used all his mandated energy and as such he, and teammate Buemi, lost their points finishes. Rowland finished this session third with a 1:20.340.

Nyck de Vries, who took the second spot on the podium yesterday, was fourth fastest for Mercedes EQ, his lap 0.006 seconds slower than Rowland’s effort. Fifth was Sam Bird and seventh, his teammate Mitch Evans, both of whom had days to forget yesterday with damage seeing Bird retire after lap 1 while Evans had to pit for a nose replacement and fell back as a result.

Tag Heuer Porsche’s Andre Lotterer ended practice sandwiched between the two Jaguar’s 0.489 off the best time. Eighth was Sergio Sette Camara, the Dragon/Penske racer had held the top of the times for a good portion of the session but could only do a best of 1:20.615 in the end.

Ninth place was held by the second BMW i Andretti of Maximilian Guenther, 0.632 seconds behind di Grassi while Nick Cassidy was a further 0.015 seconds off for Envision Virgin.