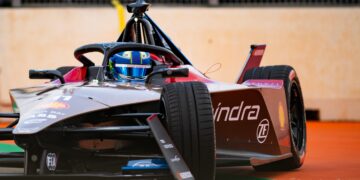 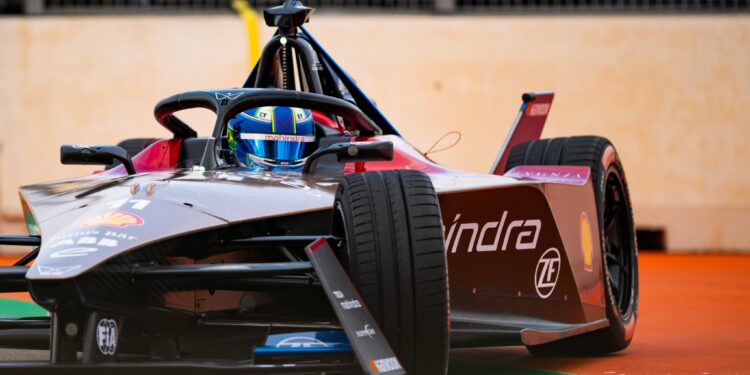 Mexico City E-Prix – Lucas di Grassi will take pole in his first race for Mahindra as Jake Dennis’ charge in a damaged Andretti falters at the final hurdle.

Sam Bird was the first out on track but he wasn’t on his own as all but Jean-Eric Vergne headed out in the opening minute of the session, but the DS Penske driver didn’t wait too much longer before making his own appearance on the circuit.

Bird’s 1:16.909 was the first time on the board, after issues in free practice earlier which saw him miss out on the majority of the session, the Brit wasn’t wasting time and had the fastest opening lap while everyone else was taking it easy on their first.

The times came down to 1:13s just before the six minute mark and it was Andre Lotterer at the top with a 1:13.509 for Andretti. At that stage the German was joined in the Duel positions by Lucas di Grassi, Sebastien Buemi and Maximilian Guenther, all separated by 0.393 seconds.

There was a bit of impeding near the end with Sergio Sette Camara getting caught behind Vergne in the stadium section, so whether the stewards find an issue with that remains to be seen. The DS Penske driver also got a black and white warning flag for stopping on track a little later to give himself some space for his final lap.

The timesheets were lighting up at the end with fast laps coming in all over the place but in the end Lotterer kept P1 having brought his time down to a 1:13.405 and will be joined by Buemi, di Grassi and Sacha Fenestraz, who knocked the Porsche of Antonio Felix da Costa out of the progression positions by 0.002 seconds.

The struggles for Bird continued as he ended the session in last place.

Edoardo Mortara was the first out and opened the group B timesheets with a 1:1.970 but once the representative times came in it was Dan Ticktum on top with a 1:13.287 with McLaren rookie, Jake Hughes, 0.079 seconds behind while Pascal Wehrlein and Mortara rounded out the top four at the halfway point of the session.

The Hankook tyres were holding on well for the 12 minute sessions so a midway change of tyres wasn’t an overly popular choice with only a couple of drivers in each session deciding to do that.

Heading into the final two minutes Jake Dennis had taken over at the top with a 1:13.074, while Mitch Evans had jumped up into P4, the Kiwi having an easier time of things than his teammate, Bird, so far.

In the end, while everyone was improving at the start of the lap, they were losing time throughout the rest of it so Dennis, Ticktum, Hughes and Pascal Wehrlein will be the ones to make it to the duels.

QF1 It was a slight advantage to Buemi at the start of the lap and despite the Mahindra driver having the faster sector two, the Swiss Envision racer remained over a tenth ahead. It was all change in sector three though as di Grassi pulled out the better time and

QF2 Big advantage to Fenestraz, over a tenth up in sector one but Lotterer flipped that gap over the course of the middle sector and then extended it at the end of the lap

QF3 Hughes started strong with nearly a three tenth advantage over Ticktum but while the NIO 333 racer was the quicker in the following sectors, he wasn’t able to knock the McLaren out of the semi final spot even though the time would’ve easily won any of the other quarter finals.

QF4 There was no stopping Dennis in the first couple of sectors as he pulled a huge gap to Wehrlein but whacked into a bollard in the final sector, breaking his front wing, which saw him four tenths slower than the German however his early lap pace saw the Andretti hold the spot by just 0.029 seconds.

SF1 Early advantage was with the Andretti driver, which saw him a few tenths up on the Mahindra however Lotterer then went off at T5/6 and that lost him a whole heap of time so it was di Grassi who became the first finalist of the Gen3 era.

SF2 The all-Jake duel. Hughes was just over a tenth up at the start however Dennis closed up and got the slightest of advantages despite still having the broken front wing on his Andretti. There was only 0.006 between them as Hughes went into the final corner but his McLaren couldn’t cope with the pace, sliding a couple of times and losing the rookie a debut final appearance in his series debut by 0.126 seconds.

It was advantage di Grassi at the start but a couple of mistakes for Dennis saw him lose seconds to the Mahindra driver and while he did get back into the groove at the end but there was no chance for him to climb the 2.941 second gap, so it will be di Grassi on pole for his first race with Mahindra.

Having had the faster of the losing times in the semis, Hughes will be starting the race in P3 ahead of Lotterer. Ticktum will be P5 while Wehrlein, Buemi and Fenestraz will be in P6-P8.

With di Grassi having started the day in Group A, that means the others in that group will line up in the odd numbered grid spots while the Group B’s will take the even ones. So da Costa will take P9, Evans P10 while Oliver Rowland will take up the final place on the grid so the whole field will be in a giant Mahindra sandwich.