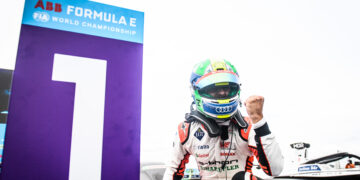 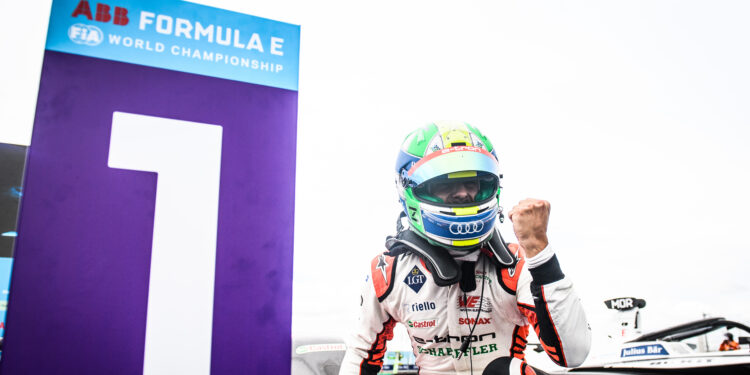 Berlin E-Prix 1 – Lucas di Grassi took another home win for Audi in the team’s penultimate race after an overtake-filled race.

Jean-Eric Vergne led a DS Techeetah 1-2 off the grid as the lights went out, all cars got through the first lap and the biggest mover in the top half of the field was Nissan e.dams’ Oliver Rowland who got through to P8 from his P11 start.

Starting P17, Tom Blomqvist pitted at the end of the opening lap after having sustained a puncture after getting hit and spun by Andre Lotterer. The NIO 333 driver had to return to the pits a lap later for a track rod change and lost 6 laps while work was carried out.

Six minutes into the race Lotterer was the first to head off-line and activate his one and only 8 minute long Attack Mode of the E-Prix. A few laps later and there a chaotic lap where Pascal Wehrlein tried to cover off Oliver Rowland after the two Nissans had just activated their Attack Modes, unfortunately for the Porsche, he made contact with the front of Rowland’s car and punctured his rear tyre.

Wehrlein got back to the pits and was able to change his wheel but returned at the back of the pack. While that was happening Sam Bird’s Jaguar slowed and stopped on track. The Safety Car made an appearance while the marshals cleared the stricken Jag and the race resumed with just less than half an hour on the clock.

Rene Rast showed just what the Audi can do with the extra Attack Mode power as the German, starting P12, made it briefly up to P2. The Audi driver passing Lotterer, then Guenther and Buemi in the same move, then Rowland and Dennis within a few corners. Over the next few laps the flying German made it past Mortara and Nato and followed teammate di Grassi onto the podium when the Brazilian moved into P2 passing Vergne and then da Costa was swamped by the two Audis.

Over the course of a few minutes the lead changed from a Techeetah 1-2, to an Audi 1-2 then to a Venturi 1-2 as Mortara and Nato pushed past while di Grassi took his only Attack Mode. With just over ten minutes on the clock the season 3 champion was back at the front after pulling off some good moves on the Venturi cars.

In the dying moments of his Attack Mode, Evans made a few tries for P3 but was initially held off by Nato however, just after the Jaguar lost the extra power Evans made it stick and made it onto the podium.

With just a couple of minutes left, Nato tried to take the place back but couldn’t make it and instead found himself having to hold off Dennis instead. It wasn’t a straight forward end for di Grassi either as Mortara was not giving up the victory easily and the two took the chequered flag beside each other.

After leading for a good portion of the race Techeetah had to settle for P6 and P7 for Vergne and da Costa respectively while Maximilian Guenther made it a double points finish for BMW finishing P8.

After his incredible, scything rise through the field in the middle of the race, Rast wasn’t able to hold onto a high spot and fell back to P9 by the end but, once again, took the fastest lap with a 1:08.908. The final point spot went to Andre Lotterer.

Last race’s winner, Alex Lynn, was handed a late drive through penalty for improper use of Fanboost but the Mahindra racer hadn’t been in a points position before heading to the pits to serve his penalty.