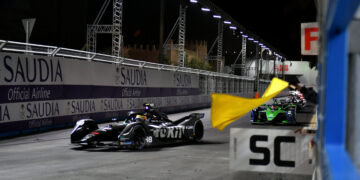 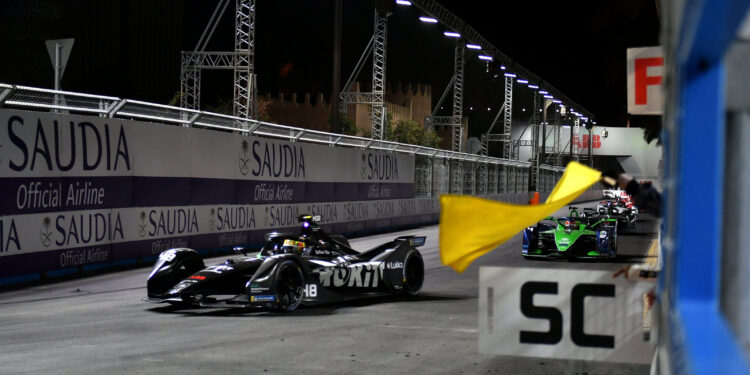 Diriyah E-Prix 2 – The second round of season 8 ended under Safety Car but the drivers were unhappy with how the car retrieval process played out.

With nine minutes left on the clock, Alexander Sims hit the wall and the damage meant that he had to park his Mahindra at the side of the track. The Safety Car was deployed but the recovery of the car was not as swift or as smooth as it should have been.

A crane was brought on track to aid the recovery but drivers weren’t informed that the Safety Car was going to slow right down to go around it, and that led to Mortara and all the cars behind suddenly hitting the brakes in an effort to avoid contact with the car in front. Not all succeeded but all cars survived though some extra pieces of carbon fibre were left on track.

Not only did they have to contend with that, but when the crane had lifted the Mahindra, it had it dangling at driver’s head height in the middle of the track just around a bend which led to very uncomfortable viewing as the cars had to avoid it.

In the post-race press conference, RaceFans journalist Hazel Southwell asked the drivers about what had happened and if they felt it had actually been as dangerous as it appeared on TV. Second place finisher Robin Frijns admitted that it was dangerous and the lack of communication from Race Control wasn’t ideal.

“I think it was quite dangerous,” Frijns agreed. “Because obviously I was behind Edo [Mortara], and suddenly the Safety Car stopped, I just hit him and the only thing I’m hearing behind me is carbon fibre cracking.

“Obviously the crane was in the middle of the track and the Safety Car had to stop but I think it was not really well communicated in a way, but we had quite enough space for me to drive over the marbles, which wasn’t ideal.”

Mortara, as first in line behind the Safety Car, had the best view of the crane’s appearance and, while acknowledging that it made life very difficult for the drivers behind, was amused by how unfamiliar the crane-driver seemed to be with his machine.

“To be honest it’s the first time I’ve seen a crane in front of me trying to manoeuvre in the middle of a race,” Mortara said. “And the guy cannot, basically he was pretty bad at manoeuvring his crane, so I thought that felt a little bit funny at that time but obviously for the guys behind it’s not because they’re coming with quite some speed and I’m sure it did create some chaos.”

Jean-Eric Vergne, DS Techeetah’s two-time champion, took to social media the morning after the race to express his disbelief at how things had played out.

“Still shocked to see how the end of the race was handled,” Vergne wrote. “A Crain [sic] on track, a safety car stopping right before it in a blind corner resulting in cars piling up, no informations given to us… seems like people don’t learn from past mistakes.”

Still shocked to see how the end of the race was handled. A Crain on track, a safety car stopping right before it in a blind corner resulting in cars piling up, no informations given to us… seems like people don’t learn from past mistakes pic.twitter.com/QtMlkEomDZ