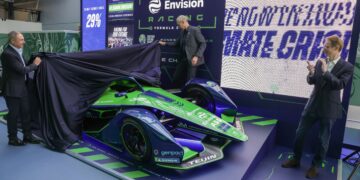 Envision debut new colours as they take over from Virgin

Envision debut new colours as they take over from Virgin 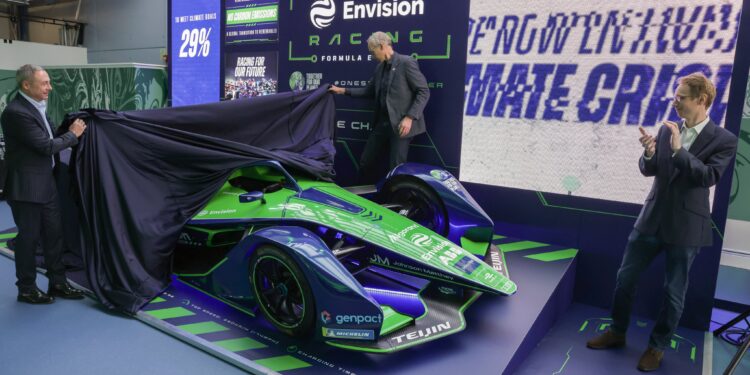 Formula E – The first season 8 livery reveal happened today at COP26 as Envision unveiled their first car as full owners of a team.

Envision teamed up with Virgin Racing in season 5 at the start of the Gen 2 era and, after three seasons as the team’s title sponsor, will now take over from Virgin as the team now becomes Envision Racing.

“We would like to thank Virgin for all their support and wish them every success for the future,” said Envision Racing’s Managing Director, Sylvain Filippi. “We are raring to go for the new season and hugely motivated about the potential of Formula E in supporting sustainable progress.”

The team’s season 8 livery was also unveiled and marked itself as dramatically different to the silver, red and purple designs that had identified the team until now. The Envision team will now head to track with a green and blue paint job, which represents the company’s push for renewable energy.

“Since becoming a founding member of Formula E,” Filippi said. “We have been on an exciting journey that celebrates sport, and its potential to influence sustainability. The team exists to accelerate the global transition to electric vehicles and renewable energy – a purpose shared by Envision Group and one that’s inspired the new design of our race car.

“Envision Group is recognised as a pioneer in net zero technologies and epitomises the progression that can be achieved through embracing a core purpose of sustainability. The new design of our Formula E car celebrates Envision Group’s ownership and recognises their unrelenting ambition to accelerate the global transition to net zero.

“We are proud to be owned by one of the world’s leading, most sustainably innovative companies and this will inspire the continued success of Envision Racing and energise our Race Against Climate Change.”

Franz Jung, Vice President of Envision Group and Chairman of the Board of Envision Racing Formula E team, concluded: “Although solving sustainability challenges requires innovative technologies, it also needs creative ways of helping people to understand and engage with new opportunities and ways of doing things.

“Partnering with Envision Racing helps to achieve this by showcasing the possibilities of electric vehicles, which supports Envision Group’s commitment to achieving decarbonisation.”

Driving with the new Envision livery for season 8 will be an unchanged line-up of Robin Frijns and Nick Cassidy. The two drivers worked well together picking up a total of three pole positions, as well as two second places each.

Heading into last season’s double-header finale, Envision Virgin were leading the Teams’ Championship with Frijns second in the Drivers’ however a difficult time in Berlin saw them fail to score any points and they fell back in both championships.

Check out the gallery below to see the full livery.