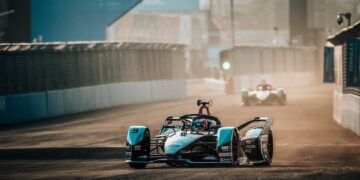 Evans holds off Vergne to win in sweltering conditions

Evans holds off Vergne to win in sweltering conditions 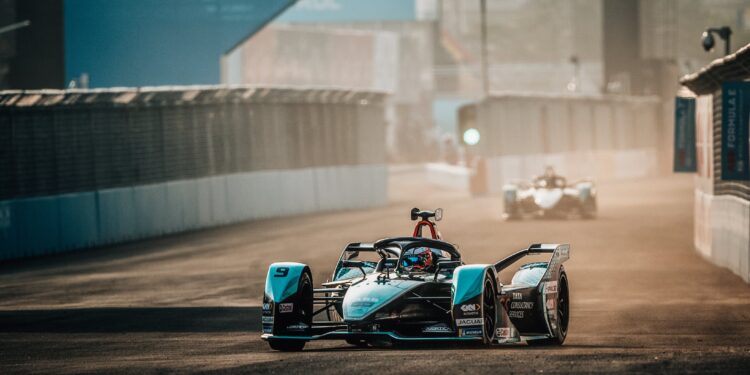 Jakarta E-Prix – Mitch Evans snatched the lead from Jean-Eric Vergne in the final ten minutes and then had to hold off massive pressure to take victory.

It was an all-Techeetah front row for the very hot and humid inaugural Jakarta E-Prix, and indeed an all-cat top three at the start with Mitch Evans’ Jaguar sitting right behind the front row duo of Jean-Eric Vergne and Antonio Felix da Costa.

As the lights went out it was a long run down to the first corner but Vergne had a better start than his teammate so he was unchallenged and the top six remained how they were on the grid. The two-time champion had pulled out over half a second over his teammate before the Safety Car was called to the track a couple of minutes into the race.

The Porsche Taycan Turbo S was called onto the circuit after there was an incident with Mahindra’s Oliver Rowland who lost a wheel out on track, but was able steer his car into a run off where he retired.

The race resumed after a couple of minutes and there was a podium position change on the first lap back when da Costa went wide, locking up and giving Evans the opportunity to slip past and into P2.

Attack Mode came into play with 37 minutes on the clock when Robin Frijns, in P19, activated the first of his two four minute activations but it was the race leader who kicked off the top ten getting involved with the power boost as he, as well as da Costa and P5 Jake Dennis, activated theirs. Evans got into the lead but fell back to P3, ahead of da Costa but behind Vergne and the non-Attack Moded Mortara, when Jaguar sent him through the activation zone.

Da Costa was the first of the top five to activate his second Attack Mode, a lap later Mortara finally took his first and then the following lap saw race-leader Vergne also take his second, once again giving Evans a brief taste of being P1. Stoffel Vandoorne was sitting in P5 but as sometimes happens, much to the frustration of the driver, the Attack Mode failed to activate on his first try meaning that he went off-line and dropped a place with nothing to show for it. He tried again, with more success, a lap later but also lost out to Pascal Wehrlein as a result.

The Mercedes driver did make those places back but that meant that he didn’t have much time left in the higher power mode to help him close up and try to challenge the top four.

With 16 minutes left on the clock it was only the two in P2 and P3, Evans and Mortara, who had an activation remaining. The Venturi was the first to take his, falling back to P4 as he did while the Jaguar driver, who had been right on Vergne’s tail, managed to hold onto P2 when he took his final activation.

Just as Evans did that, Mortara and da Costa were fighting over the final podium position which gave the Kiwi breathing space and time to close back up to the lead Techeetah. Evans wasn’t able to try to make a move while he was in the higher power but with ten minutes, as well as the additional time due to Safety Car to run, it was a nose-to-tail fight between the two drivers.

A few minutes later and the Jaguar pulled a move, seemingly surprising everyone, to slide down the inside of Vergne. Initially Evans managed to create over a second’s gap to the newly-demoted Techeetah, but Vergne did half that and more, with the help of FanBoost, to keep the pressure on in the closing laps.

WHAT A MOVE from @mitchevans_ 🤯

He swoops down the inside of @JeanEricVergne for the lead in Jakarta!

The pressure then doubled in the final minute and a lap as Mortara joined the fight for the lead while Vergne tried to make his move. Evans managed to rebuff the Techeetah and as the energy levels were low, got a bit of a breather for the final few corners to take the inaugural win in Jakarta.

The top three all crossed the line within a second of each other, each having given their all as they took the chequered flag just as their energy levels reached zero.

THIS ENDING, THOUGH?! 🤯🔥@mitchevans_, @JeanEricVergne & @edomortara all battling it out to the line, for the win – absolutely incredible!

If you need us, we'll be watching this on repeat…

Da Costa was over two seconds further back in P4, taking a good haul of points for the team. Vandoorne in P5 was the only silver arrow to see the full race through after de Vries retired with a puncture after contact with Andre Lotterer.

Dennis brought his Andretti home in P6 while Lucas di Grassi was P7 in the other Venturi. Pascal Wehrlein took P8 for Porsche while Sam Bird moved up from P14 to take Jaguar’s fourth double-points finish of the year. The final points place went to Sebastien Buemi who wasn’t able hold onto his P6 start spot, while the point for fastest lap went to the winner for a 1:09.786.

Along with Rowland and de Vries, Antonio Giovinazzi was the only other driver to fail to make it to the chequered flag, after a great start to the day in practice it all went down hill for the Dragon racer who found himself with dramatically more energy being used than his rivals and he had to retire five laps before the end.