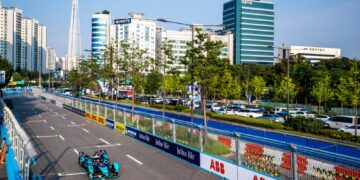 Evans keeps the title fight alive with victory in Seoul

Evans keeps the title fight alive with victory in Seoul 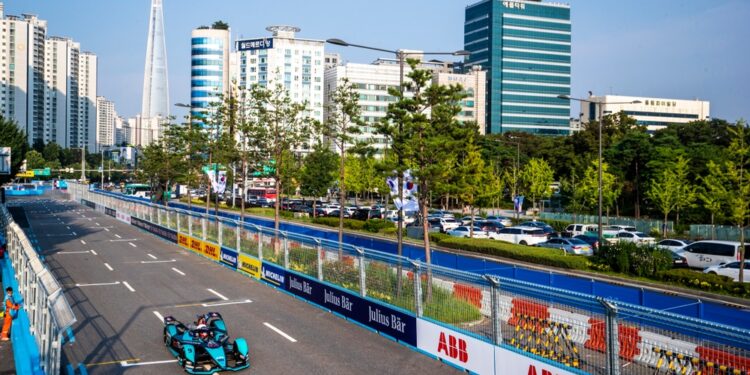 Seoul E-Prix 1 – Mitch Evans will see the championship down to the final race as he took victory ahead of Oliver Rowland with Stoffel Vandoorne in P5.

It was a standing start on for the inaugural Seoul despite the track being wet and as the lights went out Oliver Rowland, who was indomitable during the duels in the rain earlier, got wheelspin on the paint on the grid which saw him swamped by both Lucas di Grassi and Mitch Evans off the grid.

The season three champion took the lead for the first corner but Evans decided to throw caution to the wind and lunge into T2, which put him out into the lead and pulled over a second and a half gap over the course of the lap. Rowland had managed to get back into P2 while further back Evans’ title rivals Edoardo Mortara had made up a place to P5 while Stoffel Vandoorne held station in P7.

The Red Flag however came out to play just as the leaders were starting lap two as eight drivers ended up in the wall at the final corner in separate visibility related incidents. Sam Bird’s stand in, Norman Nato, was the first to into the barriers from P11 with both NIo 333’s, Dan Ticktum and Oliver Turvey also going in along with Sebastien Buemi, Maximilian Guenther, Nick Cassidy, Andre Lotterer and reigning champion Nyck de Vries who slid under Buemi’s Nissan.

Great to see all seven drivers walk away unscathed from this incident at the start of the race.

Round 15 is currently under red flag conditions as the cars are recovered from the track.

All drivers were alright, the Halo once again proving its worth, and the race got back underway after an almost forty minute break with sixteen cars taking the restart, Nato and Cassidy having managed to extract their cars from the wall and make it back to the pits under their own speed so they were able to continue while the other six who crashed would become spectators to the remainder of the first Seoul E-Prix.

Jake Dennis would be restarting in P4, much to his disappointment as he had passed di Grassi on track just before the race was suspended. There was quite a feel of a teacher trying to organise toddlers as Race Director Scot Elkins directed the teams and cars into their correct order in the pit lane before the Safety Car led the sixteen out for the first lap before a rolling start on the now much drier track.

Evans continued from where he left off, pulling a second out over Rowland on the first lap back in green flag conditions. It was quite a quiet restart though there was an incident between Jean-Eric Vergne and Mortara which saw the Techeetah into the back of the Venturi, getting the Swiss racer out of shape and allowing both Vergne and championship rival Vandoorne to get through.

The stewards investigated Mortara for multiple changes of direction and quickly handed him a five second time penalty on top of the time and positions he’d already lost.

With 35 minutes on the clock, Dennis In P4 was the first to head to the Attack Mode zone, back in the usual two activations for four minutes each. Di Grassi in P3 followed soon after with the top two following soon after so there were no position changes made amongst the top drivers through the opening Attack round.

There was contact near the back around the 27 minute mark with Alexander Sims hitting the back of Antonio Giovinazzi as he tried to overtake, the Dragon racer getting spun and losing spots to both Sims and Cassidy. Sims would later be given a five second penalty.

Just before the halfway point, Vergne was right on the back of Dennis and attempted to use his Attack Mode to make it past the Andretti for P4. It was close between the two and the wall but Dennis was able to hold the Techeetah driver off and a few minutes later Vergne had fallen back and was passed himself by Vandoorne.

The race leader, Evans, activated his second Attack Mode with 22 minutes on the clock and by the time he returned to normal power, he had a 2.3 second gap to Rowland. While Evans retained a solid 1.5 second lead after Rowland completed his second activation, things were not going as well for Mortara who had lost P7 to Pascal Wehrlein and would have to pull a gap to those behind if he wanted to take any points after his time penalty is applied at the end of the race.

Unfortunately for the Venturi racer, he wouldn’t have to worry about that as a slow puncture put pay to his day and he pulled off just after T11, and reversed himself behind the barrier out of the way and out of the title fight.

There would be 45 seconds added to the race time as a result of the time spent behind the Safety Car at the restart and with three minutes to go, Sims went into the wall at T9 after losing the rear which brought the Full Course Yellow out before that was upgraded to a full Safety Car for the final minute.

Evans followed the Safety Car home to take the win with a lot more energy in the bank than his rivals. Rowland took the chequered flag in P2 for Mahindra’s first podium of the year with di Grassi completing the podium. The Brazilian becoming the first driver to take over a thousand points in the series just ahead of his and the series’ 100th race tomorrow.

Dennis took the point for fastest lap in P4 while Vandoorne was P5, and the championship will go down to tomorrow with only Evans and himself to fight for it. Vergne was P6 while Wehrlein brought the special liveried Porsche home in P7. Both Envisions took points in P8 and P10, Robin Frijns ahead of Cassidy, who was one of those involved in the Red Flag causing incident on lap 1, while Antonio Felix da Costa split the green machines in P9.