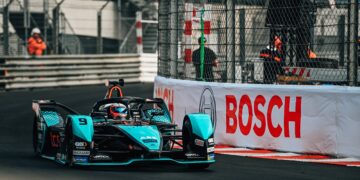 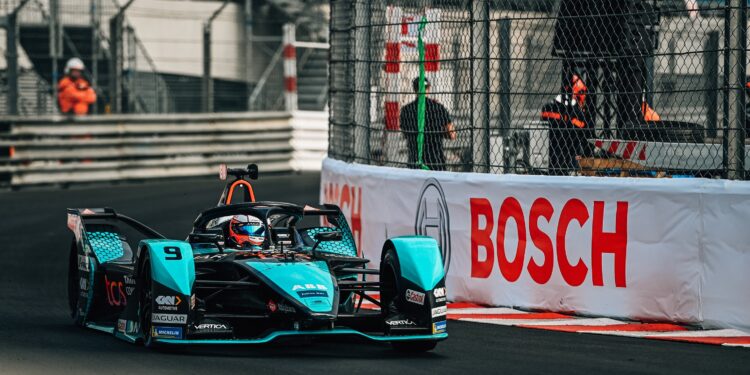 Monaco E-Prix – Mitch Evans put in an amazing duel performance to beat Pascal Wehrlein and take his first pole of the year.

While all cars were out on track swiftly enough, there was no rush to post a time and it was Dan Ticktum’s very leisurely 1:48.761 which was the first on the board after nearly five minutes. All drivers had posted something in the first six minutes, as required, and it was Jean-Eric Vergne who had the best of the initial times with a 1:31.923.

As has become the norm for the group stages, the track went quiet after the first round of times and with less than two and a half minutes to go, all drivers headed back out together weighing the risks of traffic and potential flags with getting best of the track conditions.

Vergne had a bit of a lock up at Sainte Devote on his final lap but it was a disaster for Nick Cassidy, who had an issue on his lap and pulled into the runoff at the first corner and didn’t get to complete another lap.

Stoffel Vandoorne, Pascal Wehrlein, Vergne and Lucas di Grassi will progress, with Sam Bird, who really needed to qualify as high as possible as he will have to serve a three place grid drop for a collision with Cassidy in Rome, ending in P5, missing out on progressing by 0.013 seconds.

Being in the second group was the saving grace for Oliver Askew, the Andretti driver had an issue in FP2 which saw him stop on track after only ten minutes and his team made a precautionary power train change after that, just managing to get it all done in time for group B to head out onto track.

It was Robin Frijns at the top of the times when the track went quiet after the first half of the session. The Envision racer’s 1:31.405 put him well ahead of the other provisional qualifiers of Andre Lotterer, Jake Dennis and Antonio Felix da Costa before the final flurry of laps were set.

Sainte Devote once again played its part as Dennis locked up and didn’t manage to improve on his final time, but there won’t be any repeating his pole run from last year as Da Costa lost out be over a tenth and ended the group in P6.

It ended with Mitch Evans, who said there didn’t seem to be as much grip on track as there was last year, Nyck de Vries, Lotterer and Frijns who will duel it out for pole glory.

Quarter-finals – Frijns vs Vandoorne, Lotterer vs Wehrlein, Vergne vs de Vries, and di Grassi vs Evans

The first quarter saw Frijns with the initial advantage but an incredible middle sector form Vandoorne gave him enough of a gap to see the Mercedes driver as the first to seal his place in the semi-finals.

The second quarter-final was an all-Porsche affair, both having had a lot of duel experience but Wehrlein is the only one of them to have taken a pole already this season. Lotterer ws quicker in the first sector, helped by his teammate slightly hitting the wall at the first corner but the Mexico City E-Prix winner didn’t let that hold him back and ended over two tenths faster than Lotterer to win the Porsche battle.

Quarter-final three saw a messy lap from de Vries leaving Vergne over half a second ahead of the Mercedes despite only managing the second slowest time of the quarters.

The final semi-final spot was fought between Venturi and Jaguar but there was not really much di Grassi could do to hold back the charging Evans who put in the fastest time of the day with a 1:30.053.

Semi-finals – Vandoorne vs Wehrlein, and Vergne vs Evans

It was advantage Porsche in the initial stages of the first semi-final, Vandoorne managed to pull some of the time back in the middle of the lap but the Mercedes was not as settled as the Porsche and it ended with Wehrlein almost two tenths clear and ready to fight for another pole.

Wehrlein’s challenger would be either Vergne or Evans, the Jaguar a tenth up in sector one and while the Techeetah racer pulled it back slightly and indeed posted the faster of the final sectors, Evans was on fire once again posting the fastest time seen so far, a 1:30.001 compared to Vergne’s very competitive 1:30.118.

The pole shootout saw Wehrlein out onto the track ahead of Evans, but it was the double winner from Rome who had the advantage, over a tenth up in the initial stages and there was no holding back the Kiwi after that. Jaguar racer continued his fastest lap streak to post the only sub-90 second lap of the day, a 1:29.839.

With Evans and Wehrlein on the front row, Vergne will line up in P3 as his semi-final time was quicker than Vandoorne’s. P5 – P8 will see di Grassi and Lotterer ahead of Frijns and de Vries.

Thanks to Evans starting in group B, that means Oliver Rowland will by P9, though with Bird having a his grid penalty, he drops from P10 to P13, leaving the 2021 Monaco winner, da Costa to take the final spot on row five.

Both drivers kept it on the limit. What an end to a brilliant qualifying session on the iconic streets of Monte Carlo ⚔️⚡️