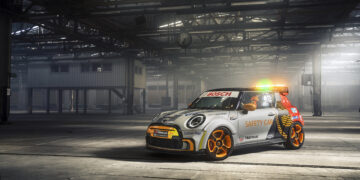 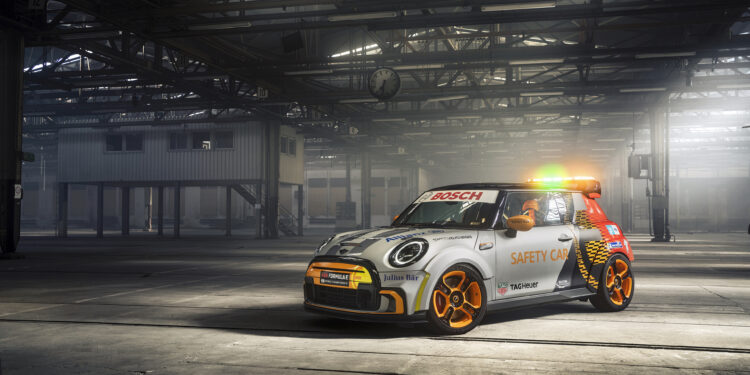 Formula E – It was announced last night that the Mini Electric Pacesetter will share Safety Car duties with the BMW i8 for the rest of season 7.

Until now the Safety Car has been either a BMW i8 Coupe or the open-topped BMW i8 Roadster, both of which are hybrid vehicles. For the remainder of season 7 however the role will be shared between the i8 and the new Mini Electric.

“Formula E and MINI are both known for being original, unpredictable and accessible to everyone,” said Formula E CEO, Jamie Reigle. “We share a progressive global mindset and are committed to an all-electric future. We look forward to watching MINI lead the way through the streets of Formula E’s iconic host cities, demonstrating the dynamic performance and urban appeal of all-electric vehicles.”

The Mini that will have its debut at the upcoming Rome E-Prix is a special, track-only version of the Mini Electric that’s quicker and lighter than the version available for purchase. The interior has been stripped of unnecessary items such as rear seats, with a minimalist dash and console setup installed. Elements from the Mini John Cooper Works GP have been added, such as the wheels and brakes, to make the Pacesetter ready for track action.

“This extreme version of the MINI Electric has been developed as the Safety Car in the Formula E, so is clearly not intended for use on public roads. But it does reveal one of the directions we could take with the electrification of the JCW brand. For me, the message is clear: electrification and John Cooper Works are a good fit.”

The man who will be behind the wheel when the Pacesetter hits the track in Rome Formula E’s Safety Car driver, Bruno Correia, seems impressed saying: “It has agility, performance, and it’s a cool looking car. The MINI Electric Pacesetter has got it all and it’s very fun to drive.”