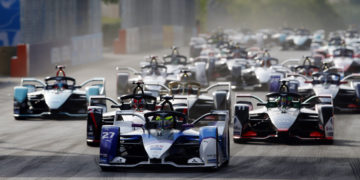 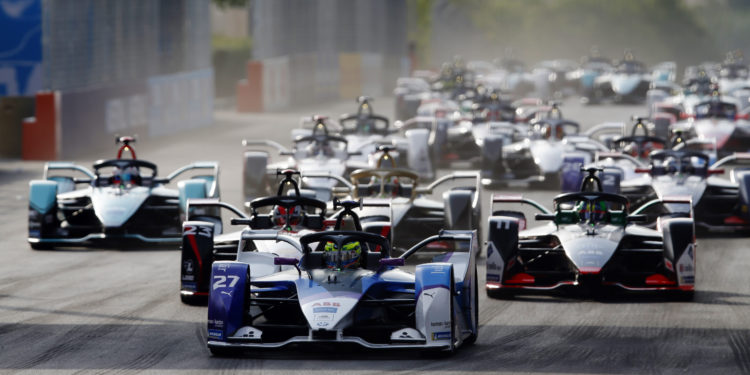 Formula E – The seventh season of the ABB FIA Formula E World Championship starts this week with the double header Diriyah E-Prix on Friday and Saturday.

Coming in at almost exactly a year since Formula E’s last normal race weekend, the Marrakesh E-Prix on Feb 29th 2020, and six months since the hectic Berlin finale which saw six races with five different winners on three track configurations over the course of nine days.

For the third season running Saudi Arabia will host the opening E-Prix however this year it will be hosting its first and Formula E’s first ever night race. According to Formula E the 2.49km circuit will be light by 600 low-consumption LED floodlights which will be powered by low-carbon certified hydrogenated vegetable oil which is created from sustainable materials.

There are no dramatic changes to the track layout but there has apparently been some surface work done which lead to slight reprofiling on a handful of the tracks 21 turns. Diriyah has seen three different winners in its time on the calendar, reigning champion Antonio Felix da Costa took the inaugural victory in 2018, while the Brits reigned supreme last time out with Sam Bird and Alexander Sims taking the top step in the 2019 double header.

As a result of the pandemic and the extra financial strains it’s putting on teams, Formula E decided that powertrains can only be changed once over the course of season 7 and 8. As a result teams had to decide which course of action would be more beneficial to them and while seven manufacturer teams, and the two customer teams in the paddock, headed to Diriyah with shiny new setups, three will still be using last season’s spec car.

Reigning double champions DS Techeetah, along with Dragon/Penske Autosport and Nissan e.dams, will have decided to hold off and spend some extra time working on their updates before introducing them later in the year.

Antonio Felix da Costa sealed his first Formula E title with two races to spare in Berlin, he will be trying to equal teammate Jean-Eric Vergne’s back-to-back championships while the Frenchman will be looking to regain the upper hand in the team battle again.

Techeetah will have stiff competition though, multi-championship challenger Sam Bird has now teamed up with Jaguar and last season’s early challenger Mitch Evans. Mercedes-Benz will be entering their second year in the sport and while Stoffel Vandoorne has proven himself a strong racer, both he and rookie Nyck de Vries ended season 6 on a high for Mercedes with the team’s first win and first double podium.

Going into their third year together Nissan e.dams’ Sebastien Buemi/Oliver Rowland partnership has been one of the most solid on the grid, and with only one point separating the two last year, they saw the team into second in the championship. As the driver with the most victories in Formula E and who led e.dams previous partnership, Renault e.dams, to three teams’ and a drivers’ championship, it’s never wise to rule Buemi out.

Another driver to never count out is Lucas di Grassi, Formula E’s first winner and most successful driver. After Audi and di Grassi’s worst season last time, they will want to end their partnership on a high before Audi leave the sport at the end of the year.

Other drivers to watch out for are Maximilian Guenther, who showed his talent at Dragon in his debut season, took three podiums including two victories for BMW last year. Rene Rast, who joined Audi for the finale races, got to grips with the car very quickly and had a very strong final two races. If he can continue that form he will definitely be a challenge alongside di Grassi.

Both Mahindra and Porsche had a difficult season 6 but there is no doubting their driver line-ups with Alexander Sims/Alex Lynn and Andre Lotterer/Pascal Wehrlein respectively, if given reliable cars they will deliver the results.

There are no new teams in the paddock this year but there are a few new drivers, and a few new homes for other drivers to get used to. The biggest team swap to get used to is Sam Bird, who had driven for Virgin since Formula E started, has switched his purple to green and will be driving for Jaguar.

After a season and a half with Mahindra, Pascal Wehrlein missed out on the Berlin madness when he left Mahindra and moved to Porsche during the summer. Wehrlein’s electric racing career started strong with a second place, a pole position and nearly a win in his second and third races but fell away slightly after that.

The third driver to move teams is Alexander Sims who has joined Mahindra after two seasons with BMW i Andretti. Sims was the first driver to take three consecutive pole positions – the NYC season 5 finale where he finished second, and the two Diriyah races in season 6 in which he won the second.

Finally, Tom Blomqvist, who raced half of season 4 for Andretti made his comeback for Jaguar in the final two Berlin races, will be joining NIO 333 for the season.

The new faces on the grid are Jake Dennis who will take the seat Sims left at BMW, Nick Cassidy, who topped the Rookie Test in 2020, replacing Bird at Virgin and Norman Nato, another Rookie Test veteran, was promoted from reserve to full-time Venturi driver after Felipe Massa retired.

Going forward, Formula E has a provisional calendar with six more races lined up. These races still have to be approved by the FIA World Motor Sport Council and with the pandemic things can change rapidly. Future additions to the season 7 calendar are set to be announced in the coming months.

This week’s races will take place on Friday and Saturday evenings (coverage from 4:30pm on Virgin Media Sport, the BBC Red Button and Eurosport 2) but the first session of the season is scheduled for Thursday afternoon, after sunset in Diriyah, so that the drivers’ first experience of night racing around the street track isn’t the E-Prix itself. That practice session will be Formula E’s first planned for night driving but won’t be the first for some of the drivers, as FP1 in Marrakesh 2019 started just before sunrise.