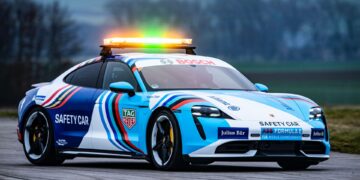 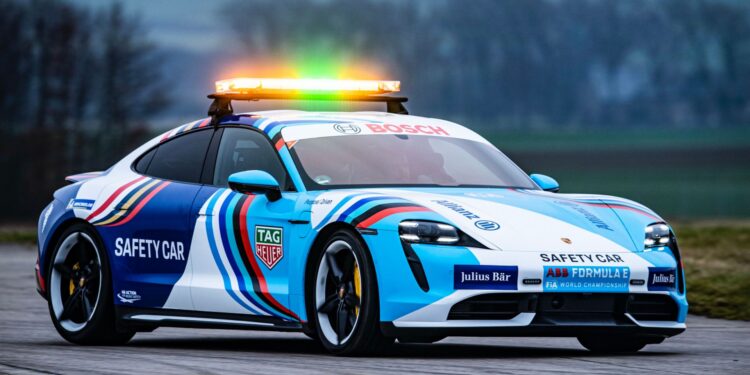 Formula E – After seven seasons with BMW owned Safety Cars, Porsche have now taken over those duties starting with the upcoming season 8.

The Porsche Taycan Turbo S will be the second all-electric Safety Car seen in the series after the Mini Electric Pacesetter joined Formula E last year to share duties with BMW’s plug-in hybrid i8 (in both Coupé and Roadster variations) which had been serving in that role since the first season.

The new addition to the grid will be the fastest Safety Car so far with a top speed of 260km/h (only 20km/h less than the Gen 2 cars) and the Taycan is on par with the Gen 2 car in acceleration with both only taking 2.8 seconds to go from 0-100km/h.

The Taycan’s livery incorporates not only the colours of the FIA and Formula E but also has stripes representing each of the teams. The design chosen as it “symbolises the commitment of everyone involved in Formula E and the common path towards the future of all-electric motor racing. At the same time, it gives a visual expression of social values such as diversity and community.”

“We’re proud that Formula E has entrusted a Porsche with this task – one that is important for the safety of its drivers,” Thomas Laudenbach, Vice President of Porsche Motorsport, said. “With the Taycan Turbo S as the official safety car, we’re making an important contribution to track safety and also underlining the importance of Formula E for Porsche Motorsport.

“The distinctive design illustrates our commitment to the successful future of this innovative racing series. Although we’re rivals out on the track, we’re spreading this message to the world together. What’s more, we hope that this also enables us to appeal to a younger target audience who are not yet motorsport fans.”

To get the Taycan track-ready, a roll cage and racing seats with six-point belts had to be installed alongside all the communication systems, lighting, fire extinguishers and other elements essential for Safety Car driver Bruno Correia to do his job properly.

“In designing the Formula E safety car, Porsche reimagined the critical on-track safety function to be a powerful symbol of the championship’s commitment to an electrified future and the unity of the competitors in the ABB FIA Formula E World Championship.”