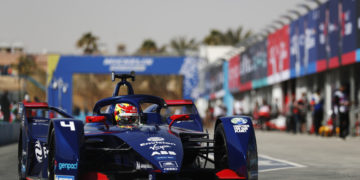 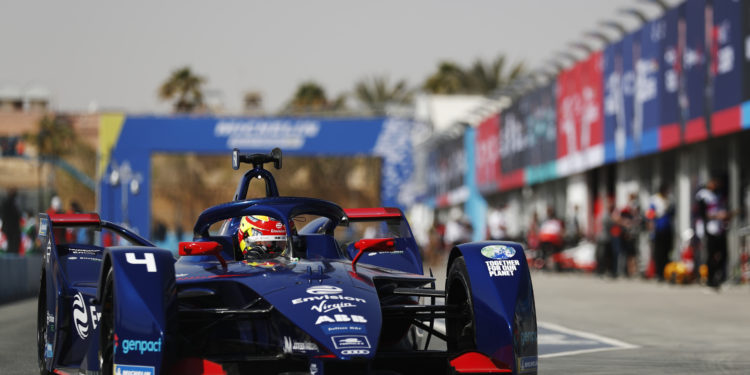 Diriyah E-Prix – Envision Virgin Racing’s Robin Frijns pipped de Vries to the top of the timesheets in the final free practice session of the weekend.

With just over a minute of practice left to run, Nyck de Vries had been holding the fastest spot before his fellow countryman put a 1:07.294 second lap together in the Audi powered Virgin car to beat the Mercedes’ best of the day by nearly a tenth and a half.

Frijns’ teammate, Nick Cassidy, whose qualifying lap yesterday would’ve seen him to SuperPole if not for Sette Camara bringing out the yellow flags at the final corner, was third 0.155 off the pace. While Oliver Rowland’s best effort was only three thousandths further back, leaving the Nissan e.dams fourth in the session.

Reigning champion, Antonio Felix da Costa, who had a very anonymous day for DS Techeetah yesterday put in a best of 1:07.512 which saw him fifth while Edoardo Mortara was sixth for ROKiT Venturi Racing.

There was a strange incident after the session when the drivers were doing practice starts, Mortara went straight on at the first corner and speared heavily into the barriers. There’s no information yet on what the cause of the accident was but Venturi have issued an update on the Swiss driver saying he is conscious but being taken to hospital for precautionary checks.

UPDATE: @edomortara is conscious, talking and on his way to hospital for precautionary assessments.

A big thank you to the marshals and medical staff for extracting him quickly and safely.#DiriyahEPrix #MadeInMonaco #ABBFormulaE

The second Mercedes with Stoffel Vandoorne posted a 1:07.562 for the seventh fastest time, while Nissan’s Sebastien Buemi was eighth. The top ten was rounded out by Jaguar’s Sam Bird and Audi Sport Abt Schaeffler’s Lucas di Grassi.

There was one red flag period which came just over ten minutes into the session after Andre Lotterer lost control and slid all the way around T11. The left side of the TAG Heuer Porsche got up close and personal with the wall and parts of the front wing ended up scattered across the track.