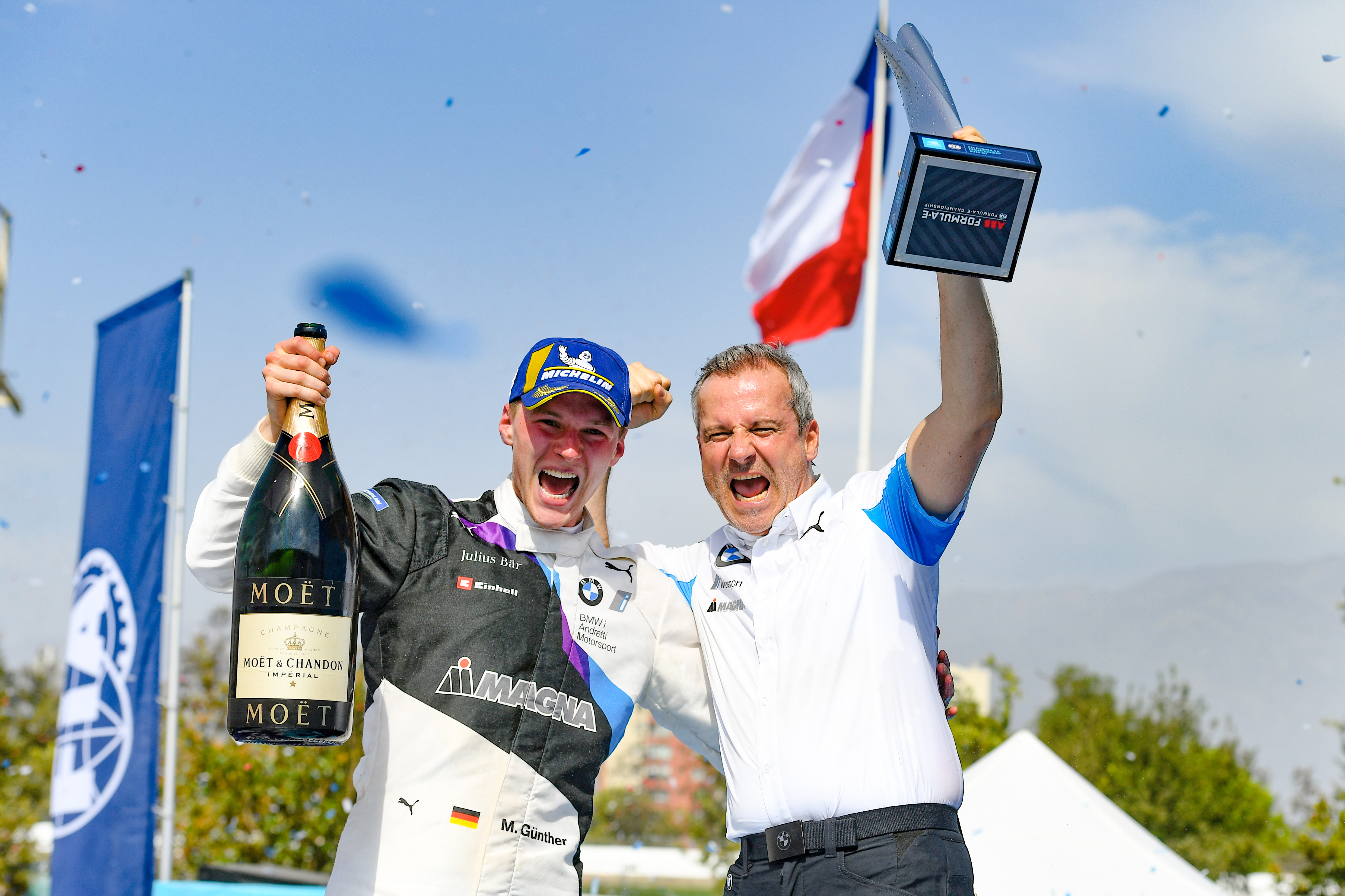 BMW i Andretti’s Maximilian Guenther took his both his first victory and his first podium at today’s ABB FIA Formula E Championship race in Santiago.

Leading the pack off the grid Mitch Evans’ Panasonic Jaguar wasn’t challenged for the lead but behind him Maximilian Guenther couldn’t hold his second place from the Mahindra of Pascal Wehrlein and so the BMW i Andretti driver dropped to third.

It was all action behind those three though with Massa and Buemi losing places in the first few corners while Turvey and Mortara moved up to fourth and fifth respectively. Further back saw some tough racing between Sims in the BMW and both of the Porsche drivers, Sims managed to maneuver his way through a bit of a traffic jam at the hairpin to get up to 11th.

It all went downhill for the three of them though as Neel Jani headed into the pits and retired a could of minutes later. Sims stopped on track causing the only disruption to the race with a very quick Full Course Yellow while Lotterer joined his teammate in the pits for just over 10 minutes before reemerging.

At the front, after getting back past Wehrlein, Guenther was right on Evans’ tail and there was a brilliant fight between the two but the German managed to make the move just before his Attack Mode ran out.

Starting from 10th, Antonio Felix da Costa fought his way to the sharp end of the field and with just over five minutes left he had passed Evans for second and was quickly fighting for the lead with Guenther. A late dive and a bit of pushing later da Costa’s DS Techeetah was into first place however the BMW was not going to settle and with only a few corners left in the race Guenther retook the lead and claimed the victory.

Pascal Wehrlein’s Mahindra came home in fourth ahead of the two Mercedes EQ’s of Nyck de Vries and Stoffel Vandoorne, who were involved in some good battles along the way. At the moment Vandoorne is now the Championship leader.

After starting 22nd on the grid Lucas di Grassi fought through the field to be the highest placed Audi powered car with his seventh place for Audi Sport Abt Schaeffler. James Calado made it a double points finish for Panasonic Jaguar as he stayed out of trouble to convert his 18th place start to an eighth place finish.

The top 10 was rounded out by ROKiT Venturi’s Felipe Massa and Envision Virgin’s Sam Bird as they both found themselves caught up in wall bashing and car spinning incidents.

Reigning Drivers’ Champion Jean-Eric Vergne had made it to third place with just over 10 minutes to go but his front wing, which had taken quite a battering, came apart and started rubbing against the track causing a great deal of smoke. In the few minutes before the wing finally detached from the car Vergne had held up his teammate before losing places and heading to the pits to retire.