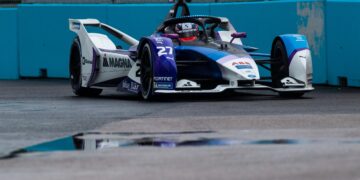 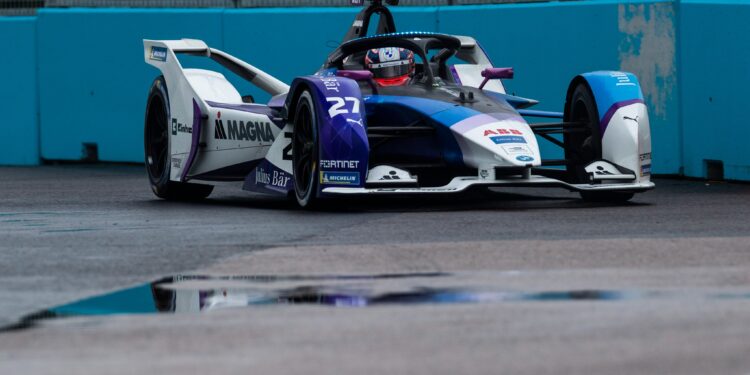 The first London E-Prix in five years started with an all-British front row with Mahindra’s Alex Lynn leading BMW i Andretti’s Jake Dennis through the first corner. Andre Lotterer was the only one of the top drivers to make a move as he got past the Dragon of Sergio Sette Camara at the start.

It was all looking clean for the first few corners but that changed at T6 when Alexander Sims got hit by Mitch Evans and the Mahindra went into the wall and stopped on track. A Full Course Yellow was called just as the leaders came to the end of the lap, Lynn and Dennis pulling a bit of a gap to Sebastien Buemi behind.

While Sims ended his race on track the pre-race championship leader, Sam Bird, pitted at the end of the opening lap with damage. He was caught between a few other cars which damaged the suspension and retired.

It wasn’t a great start for his teammate Evans either, the other Jaguar needing to pit for a nose change, most likely as a result of the Sims incident, while the Kiwi was able to return to the action, he was right at the back.

Just less than ten minutes into the race the two leaders, who had a comfortable buffer to those behind, both took their first Attack Modes. As the track is quite a slow one, the Attack Mode time had been extended to 8 minutes, twice the usual time, and almost as soon as Lynn was done with his first, he activated the required second. This time Dennis did not follow him throw and the two swapped positions with the BMW pulling the same average 0.6 seconds over Lynn as he had been behind for most of the race to that point.

Half way through the race, as Buemi and Lotterer were activating their second Attack Modes, and Nyck de Vries behind them almost makes up their two positions but as Lotterer had forgotten to arm his AM before heading into the activations zone, he failed to activate it and the Mercedes did make it to P4 in the end.

The big moment for the leaders came with just under 20 minutes to go, Lynn made a mistake and locked up heading into T10, losing the Mahindra driver 1.6 seconds. Dennis takes his second Attack Mode after that, easily holding onto the lead, and then just keeps extending the gap to P2.

While Buemi in third was closing up on the Mahindra, closing the gap to just under a second but de Vries managed to slip past the Nissan at T10. While he did gain the podium position, the time lost as he manoeuvered his way though let Lynn pull away and give the British driver a breather for a few laps as the Dutch driver reeled him back in.

Into the final five minutes FanBoost came into play firstly with Antonio Felix da Costa using it to get past Norman Nato for P9, but the more high profile usage was in the final few minutes when de Vries used his extra boost to deny the home fans a British 1-2 as he took P2 from Lynn.

Buemi came home P4 with Lotterer in a solid P5, just ahead of the two Audi Sport Abt Schaefflers. The Audis had been swapping positions during the race as they attempted to get past the Porsche but in the end it was Rene Rast who led his teammate across the line in P6 and P7, the German also taking the point for fastest lap.

Stoffel Vandoorne gave Mercedes a double-points finish as he took P8, with Antonio Felix da Costa and Oliver Rowland rounding out the points positions. However, both Nissan e.dams are under investigation for overusing energy so their fourth and tenth are provisional at the moment.

Bird and Sims were joined on the retirement list by Tom Blomqvist, who took damage early but was able to return to track after a few laps of repairs, and Norman Nato, who ran out of energy on the final lap.