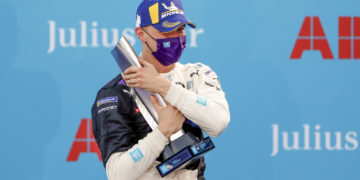 Home win for Guenther and BMW

Home win for Guenther and BMW 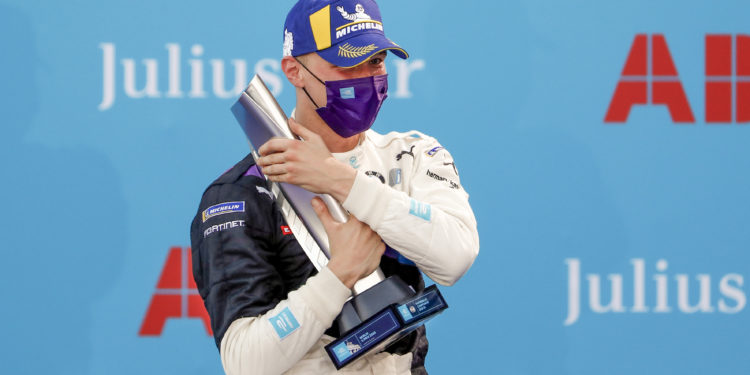 Maximilian Guenther took his and BMW i Andretti’s first home at the third of Formula E’s six Berlin races to finish the season.

A slow start for Guenther left the way clear for Jerome d’Ambrosio to move through into second. The BMW was under pressure from the second Mahindra of Alex Lynn but managed to retake his spot on the second lap. Vergne had initially pulled out a two second lead but got reeled back in by Guenther.

Behind the top three Robin Frijns and Stoffel Vandoorne made quick work of Lynn before the only interruption of the race, a safety car, was called after an multipart, multicar incident at the hairpin. Neel Jani and Sergio Sette Camara were stranded on track and out of the race while James Calado made it to the pits but retired a few laps later.

Nine minutes later the race was back on with the top two almost sharing the same piece of track, Guenther went for attack mode but as the pack were so bunched up he fell back behind to d’Ambrosio, Frijns and Vandoorne. With the additional energy he had the German quickly retook his position and continued to make life difficult for Vergne.

The first lead change came with thirteen minutes left when Vergne went to activate his final attack mode, Guenther held the lead for a few seconds before the Frenchman got it back. The next big challenge was with four minutes to go, the BMW team had just told Guenther to wait until the last lap, like Marrakesh, but he read the situation differently making the move and making it stick.

There was no let up though as Frijns had caught up and with extra energy available, passing Vergne and making multiple attempts on the lead before the chequered flag saved the day for Guenther and BMW’s home race win.

It had been a quiet race for Antonio Felix da Costa, holding his eighth place for the first half hour before he started making some moves. First up was Lynn, followed by Massa, d’Ambrosio and Rowland, until the championship leader was looming large in his teammate’s mirrors. He didn’t manage to reach the podium but the Portuguese is now in a very good position to claim his maiden Formula E championship tomorrow.

Andre Lotterer finished fifth, the Tag Heuer Porsche driver spent the final part of the race following da Costa as he scythed through the field. Oliver Rowland couldn’t defend from Lotterer towards the end and had to settle for sixth.

Despite briefly holding second position and being right behind the leaders for the early stages, d’Ambrosio fell down the order to seventh at the end. They might have great qualifying pace but the Mahindra just doesn’t seem to be able to sustain it during the race.

Lucas di Grassi and Mitch Evans brought home a few points for Audi Sport Abt Schaeffler and Panasonic Jaguar Racing with eighth and ninth plus a fastest lap respectively. After heading to Berlin with an eleven point deficit to the championship leader Evans has added only three points to his tally as compared to the 70 da Costa has accumulated.