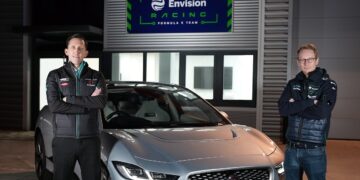 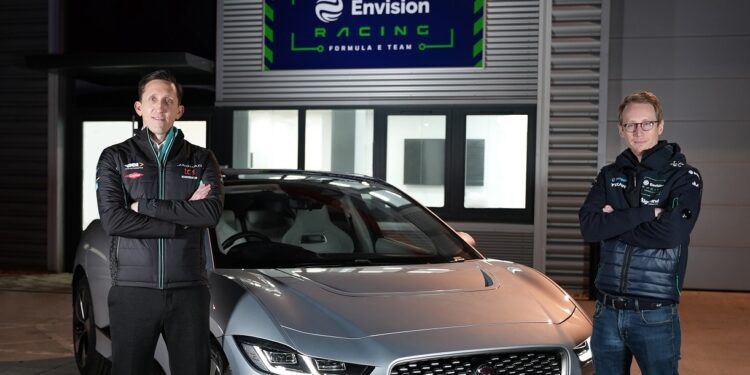 Formula E – It was announced earlier today that from season 9 Envision Racing will become Jaguar’s first customer team and run with Jaguar powertrains.

Envision Racing have been a customer team since the start of the Gen2 era back in season 5 when they teamed up with Audi. However, after the German manufacturer decided to leave the series after season 7, Envision had to go looking for another supplier for future seasons. In an effort to cut costs as a result of the pandemic, powertrains for season 8 are unchanged from last year.

For at least the first few years of Gen3 the two British teams on the grid will, while still being on-track rivals, be partnered through technology as the Envision cars will run with Jaguar-supplied electric motors, inverters, transmissions, cooling systems, casings and suspension.

“Jaguar and their factory team have been one of our fiercest competitors in Formula E since they joined the Championship in 2016,” said Envision Racing’s Managing Director and CTO, Sylvain Filippi. “The team’s advanced powertrain technology and overall commitment to its Formula E programme made them the most attractive option to us.

“Formula E is one of the fastest growing sports in the world, inspiring and exciting the next generation of motorsport fans in cities across the globe. But more exciting is the fact it is arguably the most collaborative sport in the world because we recognise the role that we can play in solving one of the biggest problems of our time in the race against climate change.”

James Barclay, Jaguar Land Rover Motorsport’s Managing Director, agreed that the two teams were a “perfect fit” given their aims and is looking forward to four Jaguar-powered cars competing with each other in season 9.

“I am proud to announce that we will supply Envision Racing with our Jaguar powertrain in Gen3,” Barclay said. “They are one of the most competitive teams in Formula E and it’s an honour that they were set on using our powertrain technology in this new era of FIA Formula E. We look forward to working and achieving further successes together in the future. I have a huge amount of respect for Sylvain and his team – they are the perfect fit for Jaguar. We are both fully committed to Formula E. The Gen3 era of racing is going to push the boundaries of electric vehicle technology in a high-performance racing environment.

“Envision Racing will be able to optimise their own software for the powertrain so we remain rivals on track. However, we race to innovate together and I’m excited to see four Jaguar powered Formula E race cars line up on the grid alongside each other next season.”

Both the Jaguar and Envision teams will be taking to the track this weekend for the third race of season 8, the Mexican E-Prix. Envision had the better start to the season with Robin Frijns taking P2 in the second Diriyah race while his ex-teammate Sam Bird took Jaguar’s best so far of P4 in the opening round.