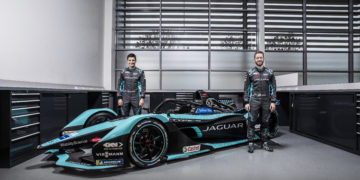 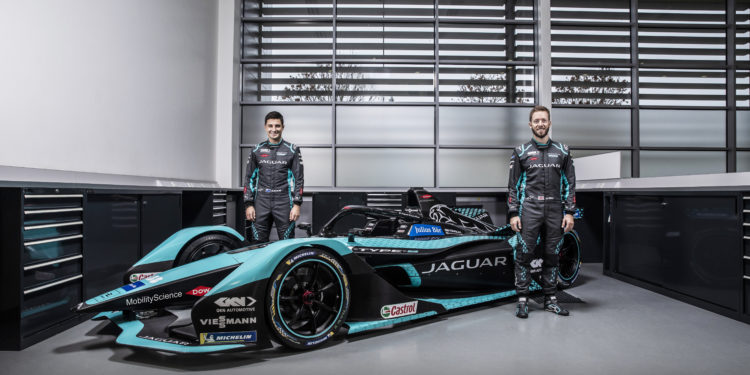 Mitch Evans and Sam Bird today unveiled Panasonic Jaguar Racing’s I-Type 5 ahead of the pre-season 7 test in Valencia this weekend.

Heading into their fifth season in Formula E, Jaguar have taken the covers off their new challenger, which due to mandated cost-saving, will contest the next two seasons. Jaguar’s newly developed powertrain has been created lighter and more efficient than its predecessor, while the team have also made improvements to their suspension and inverter.

To create their new, more efficient inverter the British team have incorporated 24 carat gold into the build. Their innovation isn’t all under the bodywork though as the drivers’ seats have been made from a sustainable material called Typefibre, and they will be closely watching how it performs throughout the season in differing conditions.

Sam Bird was announced for Jaguar during the summer, after competing in every Formula E race so far for the Virgin team. Bird said that the decision was “years in the making” given he had been speaking to Jaguar and their Team Principal, James Barclay, “for a long time now, but I just felt the timing was right.”

“It’s a team with a lot of momentum going forwards,” Bird continued. “I’ve seen them grow from season 3, their first year in Formula E, every year they get more and more competitive. Watching Mitch last year really take it to everybody really, and we’ll go to Santiago and give it absolutely everything.

Talking about his new teammate, Mitch Evans, the Brit said he felt they work well together and will push the team forward: “I really have learnt a lot [from Evans] already, I think his feedback is amazing. Of all the drivers that I’ve worked with so far, his feedback is so intricate, so detailed…he’s not bad in the car either.

“We’re going to work extremely closely I think, we’re going to take this car and make it faster and faster all the time. The fact that we’re both competitive as well is just going to push us, hopefully, closer and closer towards the top of that championship.”

Evans was equally complimentary about Jaguar’s new driver, saying: “Obviously his stats speak for themselves, the wins, the runner-ups, I’m sorry to say, but I mean he’s almost won the championship a few times. One of the most successful, experienced guys in Formula E so to have someone of Sam’s calibre come into the team, he’s literally the last piece of the puzzle we need to really elevate this team. I think it’s better to have him as a teammate than a rival because when you see Sam in your mirrors, you’re definitely a bit worried.”

Despite a great start to season 6 and heading into the Berlin races second in the championship, Jaguar’s challenge faltered and fell away. However, Evans said the way the team came together during that time helped motivate them for the upcoming season.

“It was a really tough few races [in Berlin],” said Evans. “And also afterwards, the aftermath of Berlin was tough to accept. How much we came together during that week to try and solve answers and just find little bits of improvement in performance was really impressive to see and that’s obviously given us a massive boost of motivation coming into this season.

“It hurts, but hopefully it’s only going to make us stronger and faster on track. I’m really looking forward to getting into the car in Valencia and then obviously Santiago is actually not far away as well so just a lot of excitement. There’s been a lot of R&D that’s gone into this new car, a huge testament to the whole design team back at the factory, just a huge push to try and improve things and keep it moving forward because we know the other teams are not standing still. So far everything looks positive and we’re hitting our targets which is the main thing.”

Jaguar Racing’s Team Director, James Barclay, believes that the Evans/Bird lineup is the strongest they’ve had and is very excited to see how the season progresses with the two.

“We’re really pleased,” Barclay said. “Having two drivers that are capable of fighting for podiums at every race is not something we’ve had. Mitch has been an absolute star of the championship but having that second car that’s capable of doing that, we haven’t had, so for us this kind of completes the jigsaw puzzle, it’s a really important step for us.

“As Sam said, we’ve been talking for a while now and we felt he was the perfect fit for us, the attitude, the never say never attitude, he just wants to go out and race and he’s a real racer. That’s something which we value. We’ve seen that from him, his overtaking moves are pretty legendary in Formula E already and we love that attitude, so we felt he’d be the idea fit for us.

“It’s actually a really exciting time for us, we start the season knowing we have an incredibly strong driver line up, two drivers that if we give them the right car, they can go and deliver results, and that’s very exciting.”

Barclay is also very proud of the new car and how the development team managed to continue effectively despite the pandemic and the disruption that brought.

“Our fifth all-new car for Formula E,” Barclay continued. “We’ve introduced a new powertrain every year since we started the championship and we felt this year was no different. We had an early season advantage in the car last year but as Mitch said, no one stands still and our view is we had to introduce a new powertrain, new car and the I-Type 5 is our next evolution of our philosophy of what we think it takes to go and win races in Formula E.

“A further step in terms of performance and terms of how we reduce centre of gravity, how we reduced the weight, how we improved the efficiency. Really proud of what the team have done, especially during the Covid pandemic, how difficult that is to maintain a development path but we’ve done it and we’re looking forward to introducing the new car.”