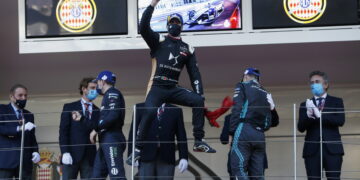 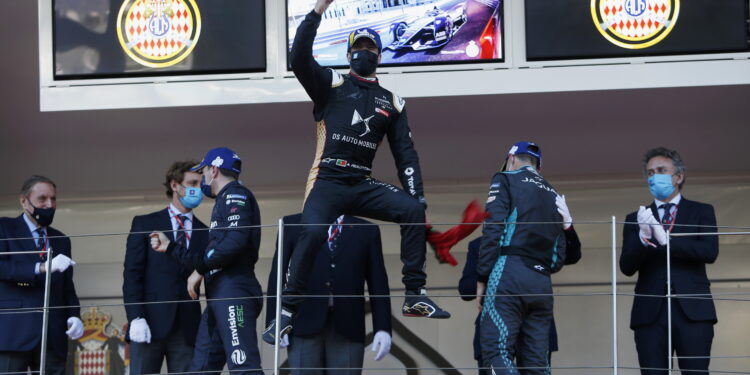 Monaco E-Prix – Antonio Felix da Costa took his first win of the season in an action-packed race that saw multiple on-track overtakes for the lead.
Formula E’s first E-Prix around the full Monaco track took place under blue skies and sunshine as Antonio Felix da Costa led Robin Frijns away from the start grid. The Gen2 cars in the mid-pack headed up Beau Rivage three-abreast as sprinkles of carbon fibre bodywork was scattered at multiple points around the first lap.

The hairpin saw the biggest incident with Alexander Sims being rear-ended, knocking him into the barrier at he exit while another car drove over the battered Mahindra. Sims was able to bring the car back to the pitlane but it was too heavily damaged to continue.

The first lead change came just over five minutes into the race when Frijns slid past the Techeetah heading into Sainte Devote. The two would continue to trade the lead as Attack Mode was activated and utilised. With 16 minutes on the clock it was all go at the front, da Costa made good use of his FanBoost through the tunnel to bring him alongside Frijns and then pulled ahead on the run down to the chicane.

Mitch Evans in third had been told the Virgin was holding up the Techeetah and that he should close up with his Attack Mode and join the fight. He did just that and as da Costa hit the front, Evans was right on Frijns’ tail before getting past into 2nd on the start/finish straight then the Kiwi used the momentum to go side-by-side with da Costa up Beau Rivage and in less than a lap there was a second lead change.

Almost as soon as that occurred, the Safety Car was called to clear Rene Rast’s Audi from Beau Rivage. The German had been alongside Nick Cassidy heading through Sainte Devote but got onto the marbles and hit the barrier before coming to a halt further up the hill.

The race went green again with 6 minutes plus one lap left but the real action was left until the final lap. Da Costa tried to copy Evans’ move through Beau Rivage but it was through the tunnel again where the Techeetah was able to pull up and once again take the lead on the run out of the tunnel.

There was more still to come though as, while da Costa pulled ahead, Evans had used more energy than the cars around him in his race to the lead as a result he was being swamped and then had to lift heading to the chequered flag so he wouldn’t overuse his energy. Frijns took full advantage and snatched second from the Jaguar’s grasp just at the line.

Jean-Eric Vergne had been in the mix fighting with da Costa and Evans in the early stages. In trying to pass Evans at the chicane, the two went side-by-side leaving little room for the Jaguar who cut the corner and retained his position as a result. A few laps later though and the Kiwi was told to give the place back but Vergne didn’t get to keep it for long. The French driver ended fourth with the fastest lap, giving Techeetah their first double-points finish of the season.

Maximilian Guenther and Oliver Rowland finished where they started in fifth and sixth, while Sam Bird fought his way from sixteenth to seventh for Jaguar. Nick Cassidy brought the second Virgin Racing car home in eighth ahead of Alex Lynn, the sole surviving Mahindra, and Lucas di Grassi who was boosted to the points after a post-race time penalty for Andre Lotterer dropped the Porsche from ninth to seventeenth.

Championship leaders Mercedes went into the race with Vandoorne and de Vries in 15th and 23rd, with a 10 second stop and go penalty for the Dutch driver as he had changed his power box and gearbox but couldn’t serve all the 40 place grid penalty for doing so. Neither made it up to a points position and in the end both had to retire before the end.