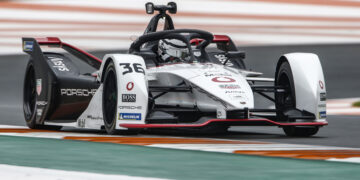 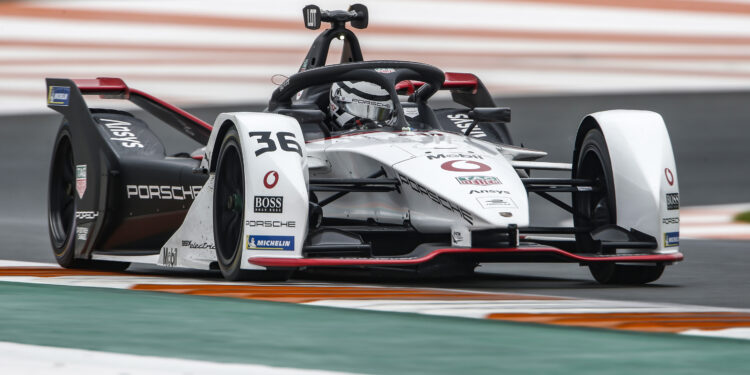 Valencia E-Prix 2 – Andre Lotterer led a Tag Heuer Porsche 1-2 in the only free practice session of the second Spanish round.

After overnight rain the day’s first track action took place on a wet, but slowly drying track. Setting their fast laps at the very end of the session, Porsche saw Pascal Wehrlein briefly top the timesheets before his teammate put in a 1:35.269. That was enough to put Lotterer just over three hundredths ahead of Wehrlein.

Sam Bird was 0.404 off the quickest lap but, after Jaguar struggled in every session yesterday, will be hoping that the team have managed to fix some of the issues and give themselves a fighting chance today.

Envision Virgin’s Nick Cassidy had been fastest a few times during the 45 minute practice but in the end had to settle for fourth, with a 1:35.685. Sergio Sette Camara finished the session stuck on a runoff outside T8 when he had some brake issues but the Dragon/Penske Autosport driver’s earlier effort put him fifth, half a second off Lotterer.

Sixth was Rokit Venturi’s Norman Nato while Lucas di Grassi was the last man in the 1:35s with a 1:35.964 for Audi Sport Abt Schaeffler. Yesterday’s initial polesitter, last place starter and third place finisher, Stoffel Vandoorne, was the quickest of the Mercedes EQ duo in eighth with his teammate and yesterday’s winner, Nyck de Vries in tenth.

Splitting the who Mercedes was Jake Dennis with a 1:36.092, the BMW i Andretti rookie took his first points of the season in the first Valencia E-Prix after he was one of only nine classified drivers at the end of it.

There was a brief red flag period about ten minutes into the day’s running when Edoardo Mortara got beached at T12 but the marshals quickly hoisted the Venturi out and placed him back onto the track, allowing him to continue with his day.