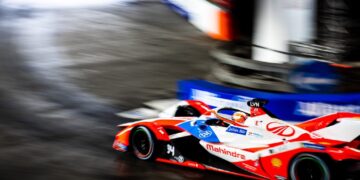 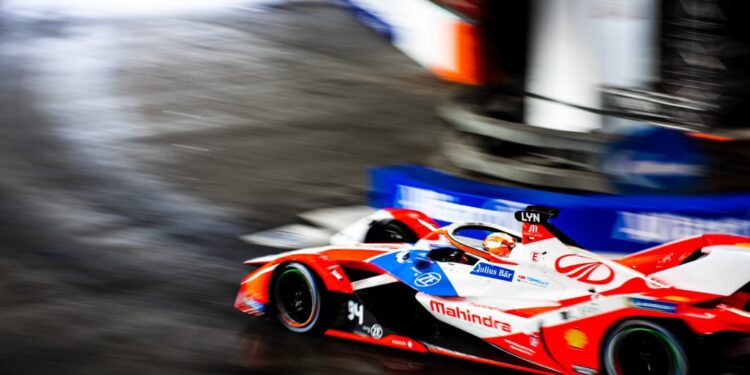 
The first qualifying group all headed out with good time to put in a preparation lap before going full power so as they could figure out where the worst of the wet was. Compared to the free practice earlier, the track was much drier.

Jean-Eric Vergne was the first out on track but his lap ended up almost a second slower than Venturi’s Edoardo Mortara, who had been last to set his 1:25.198. Reigning champion, Antonio Felix da Costa, was second on track just behind his Techeetah teammate but had a much better lap and was holding the top spot until Mortara went 0.081 seconds faster.

Group two passed smoothly, with five of the six drivers putting in times faster than Mortara. The Venturi driver has a very tentative hold on the final super pole spot but is over six tenths off Lucas di Grassi, who sits at the top of the times with a 1:24.564. The only driver not to go faster than group one was Nissan’s Oliver Rowland, the British driver had been on the pace in the first two sectors but had a bad final sector and lost a second and a half.

The third group saw the fastest driver from this morning’s practice session, Maximilian Guenther, got out of shape in T15 on his fast lap and hit the wall as he tried to get the car back under control. The front left took the brunt of the hit and the BMW came to a halt in the run off at T16. The red flag was shown and as none of the other drivers had completed their laps, they were all allowed to go back out and try again ten minutes later when the BMW had been recovered.

After the red flag, Andre Lotterer put in the quickest time so far, his 1:23.900 enough to hold off the best attempts of Alex Lynn and Jake Dennis. Alexander Sims slotted into fifth as he was just a couple of hundredths off of di Grassi’s G2 effort but the lack of wet running for Stoffel Vandoorne was apparent, the Mercedes driver crashing out in the opening minutes of FP2, and he could only put in a time 1.2 seconds off of Lotterer’s.

The final group might have had the benefit of all the previous drivers drying up the track and laying down rubber for them but none of them were able to get within two tenths of the best group 3 times. Sebastien Buemi, Sergio Sette Camara and Norman Nato slotted in behind the top three to take the final Super Pole positions, just denying group 2’s Lucas di Grassi.

Super Pole was then to be contested by three G3 and three G4 drivers, with Venturi’s Norman Nato being the first out and had a mostly tidy lap, just managing to avoid sliding into the chicane wall in the final sector, to set 1:23.912 as the time to beat.

Sergio Sette Camara was next out, the Dragon/Penske driver was very happy with his can and went quicker in the first two sectors to take the provisional top spot by 0.154. After a very slow first sector, Sebastien Buemi dragged it back through the second for Nissan before going almost three and a half tenths better in the final to go top.

Fourth out was BMW’s Jake Dennis, the British driver going just over a tenth quicker in both the first two sectors but couldn’t match Buemi’s final after making a mistake in T16. However, his early pace was good enough to see him into the lead before Mahindra’s Alex Lynn put in a very quick, tidy lap to make it a provisional British front row, going 0.299 faster than Dennis.

The final driver out Andre Lotterer, the fastest from group qualifying, but the Porsche driver just wasn’t on the pace and didn’t challenge the pole ending over six tenths off in P5. That means Lynn takes his second pole in Formula E, his first coming in his debut race, New York 2017.

Eighth on the grid will be Lynn’s teammate, Alexander Sims, while Mercedes’ Nyck de Vries will be ninth and Joel Eriksson makes it two Dragons in the top ten.