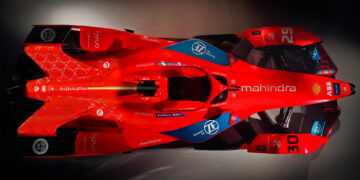 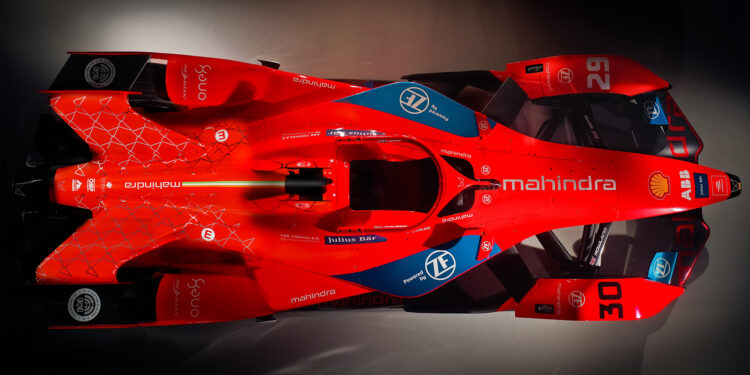 Formula E – Mahindra Racing have lifted the covers on their season 8 challenger and have embraced an almost fully red livery this time out.

White and red have been staples of the Mahindra Racing team for the past seven seasons but the Indian team have decided to change things up for the final year of the Gen 2 car by putting themselves firmly in the red corner.

There are splashes of blue from the ZF sponsorship beside the cockpit and on the front wing, while the rest of the front wing is black with the colour also flowing along the sidepod beneath the Mahindra branding.

The team also debuted the new Mahindra logo which features just behind the cockpit and also as a lattice pattern over the rear of the car.

The sun is rising on a new era for Mahindra Racing 🌅

What do you think #Passioneers?

“On the cusp of a new season,” said Mahindra Racing CEO & Team Principal, Dilbagh Gill. “We are thrilled to reveal our new race car. We head into our eighth year of competition reinvigorated and working hand in hand to maximise our package with the fantastic partners we have; including ZF and Shell, whose technology forms key parts of our M7Electro.”

Alexander Sims will remain with the team however Alex Lynn has departed and his seat filled by Oliver Rowland. After three years with Nissan e.dams, where he took five poles and five podiums including a win,  Rowland returns to the team he made his series debut in a one-off appearance with back in season 2.

As they usually do, Mahindra ask their fans to help name their cars and for season 8 Sims will be driving ‘Rath’, meaning chariot in Hindi, while Rowland will be aboard ‘Rowl With It’.

Nick Heidfeld, who spent three years driving for the team and was responsible for their first ever podium finish, had been acting as both Special Advisor and reserve driver since he retired after season 4. Mahindra say that the German has now stepped down from the reserve role but will continue as their advisor.

Jordan King meanwhile will remain as the team’s development driver.