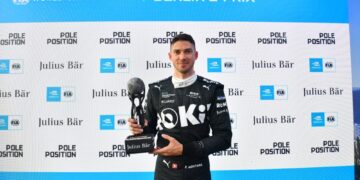 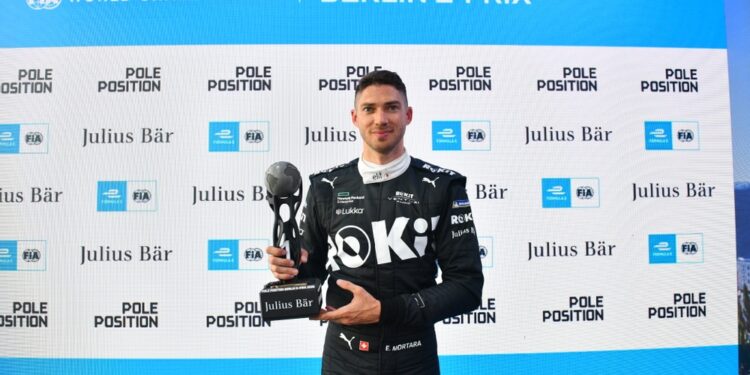 Berlin E-Prix 1 – ROKiT Venturi’s Edoardo Mortara took his second victory of the year as he beat Jean-Eric Vergne in a close-run race.

Edoardo Mortara, with his debut Formula E pole, lined up with a clear track ahead of him which will be a relief after his last visit to Berlin ended with him going into the rear of Mitch Evans after the jaguar stalled on the grid. The Venturi driver was joined on the front row by Alexander Sims, the Mahindra racer a late addition to the duels after Sebastien Buemi had his time cancelled for not adhering to the minimum time in the pitlane during qualifying.

Despite Sims’ great performance in the duels he will have his work cut out for him this afternoon as the British driver hasn’t been feeling too well and said he’s only had a banana since breakfast yesterday.

As the race went green it was a perfect start for Mortara, his lead being unchallenged while Sims had to fight off Antonio Felix da Costa as the Techeetah driver looked to move up from P3. Jean-Eric Vergne lost out to the Porsche of Andre Lotterer at the start and a couple of laps later made a mistake with Pascal Wehrlein and that dropped the double-champion to P6.

While Vergne had fallen back, it was Jake Dennis and Sam Bird who had moved forward at the start, the Andretti racer moving from P11 to P8 while the Jaguar driver jumped from P15 to P11. Unfortunately for Bird, he lost two of those places over the course of the first ten minutes to Stoffel Vandoorne and Lucas di Grassi.

Lap three saw the first change in the podium places as da Costa finally made a move stick and put his Techeetah ahead of Sims and it wasn’t long before Lotterer had also got past and demoted the Mahindra driver off the podium. The Brit tried to fight back against the Porsche but unfortunately his fall down the order continued as Vergne, who had regained his place from Wehrlein, also got past Sims.

With 32 minutes on the clock Wehrlein was the first to head for the Attack Mode activation zone, Attack Mode today in the traditional two activations of four minutes each, the Porsche managed to hold his position as he went off-line to the activation zone and a mix of the additional power, and the drivers ahead also activating their first activations, Wehrlein returned to normal power sitting P2, less than a second behind Mortara.

As always with Attack Mode, positions were changing all over the place but as the first round came to an end, Mortara was still in the lead, though he still had both Attack Modes to use, with Lotterer having won out over da Costa for P2, while Vergne and Wehrlein slotted in behind them.

Ten minutes after the first driver headed to the Attack zone, Mortara activated his first, briefly losing the lead to Lotterer, and as he regained it, Sims was making the move on da Costa to get back to P3 before his second Attack Mode ran out.

Just as Sims had done, Vergne took possession of the final podium place with the last minute of his second Attack Mode while a combination of good racing and his first Attack Mode, saw Vandoorne also get past Sims and then Vergne, the Frenchman was then the only one of the top four to have used both his activations.

At the front, Lotterer was right on Mortara’s tail and he headed to the activation zone with just over thirteen minutes left in the race. Vandoorne followed him the following lap but Venturi continued holding out on their final Attack Mode until just after the ten minute mark.

Mortara fell to P3 after that but he would have two minutes left once the Lotterer and Vandoorne returned to their normal energy modes. The Swiss racer didn’t need much of that additional time to get himself back into the lead and he had a seven tenths gap over Vandoorne when the higher power mode finished.

It was Vergne on the move in the final few minutes, the Techeetah first knocking Lotterer off the podium before using his FanBoost to assist him past Vandoorne, into P2 and pull right up behind Mortara.

With ninety seconds on the clock the lead changed but Mortara got the place right back as Vergne lost time in that fight and fell into the clutches of Vandoorne and Lotterer while the Venturi had some breathing room at the front.

P2 to P6 were all nose-to-tail for the end but there were no more podium place changes and so Mortara was joined by Vergne and Vandoorne.

Lotterer took P4 ahead of Evans, while their teammates managed to get past da Costa and take the chequered flag with Wehrlein in P6 and Bird P7. Da Costa took P8 while Sims, who started on the front row, took his first points of the season in P9. The final points position went to the reigning champion, Nyck de Vries while Wehrlein also took the point for fastest lap in the top ten.

Overall fastest lap went to di Grassi, the second Venturi had been in his second Attack Mode and a few places outside the points when he had to pit as a result of a slow puncture, he returned to the track to post the fastest lap before retiring. Envision Racing’s Nick Cassidy was the only other retiree.