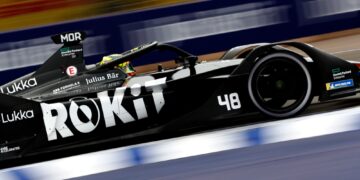 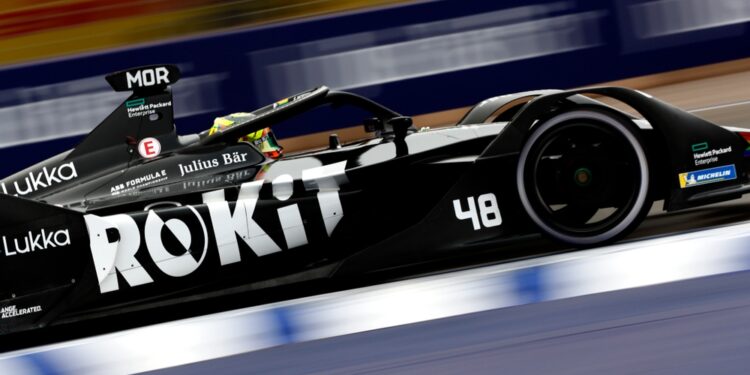 Marrakesh E-Prix – Edoardo Mortara took his first victory in Marrakesh after converting P2 to the win despite pressure from the Antonio Felix da Costa.

Antonio Felix da Costa picked up his first pole of the season after defeating Edoardo Mortara in the final duel, the last time Formula E raced in Marrakesh, 2020 just before the season was put on hiatus due to covid, the Portuguese also started on pole and in that race he went on to also take that victory.

As the race went green Mortara didn’t have the greatest of starts which let da Costa get away without any challenge to his lead. There was a change in the top five though as Jake Dennis got the better of Pascal Wehrlein to move up to P4 while the Porsche focused on defending from Mitch Evans instead.

The Porsche driver appeared to be on a more conservative strategy than those around him at the start and Wehrlein saw himself lose out and fall back to P9 on the first handful of laps.

Lap four saw all four of the top positions change as the two Techeetahs activated their Attack Mode, which today is to be activated two times for three minutes each. The time lost in the activation zone saw Dennis briefly get ahead of Vergne while Mortara was able to lead the race for a lap before the Venturi driver took his first Attack Mode.

As the two Techeetahs returned to normal power, in the same positions they were in prior to activation, P1 and P3, but it wasn’t to be for long as the car behind were all in the higher power mode and Vergne got swamped by first Oliver Rowland, who was making great gains from his P11 starting place, and then Dennis and Evans.

Second attack modes were put into play pretty soon after the first, the commentators mentioning that some engineers believed it better to get them over with while the batteries weren’t too hot. With air temperature in the 30s and track temperature in the 50s, battery temperatures were going to be an important piece of the Marrakesh race-winning puzzle.

There was a bit of contact between da Costa and Rowland as the Mahindra driver hit the rear of the Techeetah making da Costa go slightly off line. He did give the position back, but it wasn’t long before the British racer was in front legitimately just before the 30 minute mark.

Twenty minutes into the race and Mortara but what gap he had pulled out was cut well down by Evans, who had used his second activation to make his way forward into P2. Da Costa had managed to get the better of Rowland again once the Mahindra returned to normal power.

Behind them Dennis had Vergne right up behind him and the Andretti driver was lucky to avoid a puncture when the Techeetah went into the back of him at T1, the incident was noted by the stewards.

With twenty minutes on the clock both Techeetahs were on the move, Vergne, who had managed to make it past Dennis, pulled a move on Rowland for P4 at the same time as da Costa snatched P2 from Evans. The two gold cars having a percent or two more energy left than all in the top ten bar Mortara, who equalled them.

A couple of laps later and Techeetah once again had both their drivers in podium positions while the Venturi at the front was holding on to just over half a second of breathing space. With just over ten minutes left to go the two Techeetahs swapped positions as Vergne is in the championship fight with Mortara while da Costa isn’t after having had a more difficult season so far.

At the five minute mark da Costa was right on the rear of Vergne and petitioned the team to let them swap telling them that he could get Mortara. The team allowed it to happen and the Portuguese did indeed cut the 0.9 second gap in half right away while the Frenchman fell back from the two.

With Vergne seeming to struggle in the final couple of laps, Evans took his chance and snatched the final podium spot from the Techeetah driver. Behind them Lucas di Grassi also made a successful late move to go past Nyck de Vries for P5 and the Venturi driver will also take the point for setting the fastest lap. Dennis took the chequered flag in P7 for Andretti just ahead of the Stoffel Vandoorne in a great recovery for the from P20.

Sam Bird in the other Jaguar also made the final lap count, slipping past both Oliver Askew and Rowland to jump from P11 to P9 and take the finish just ahead of the Mahindra.