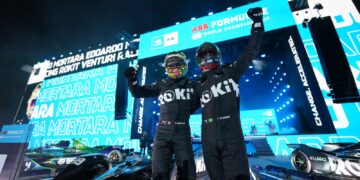 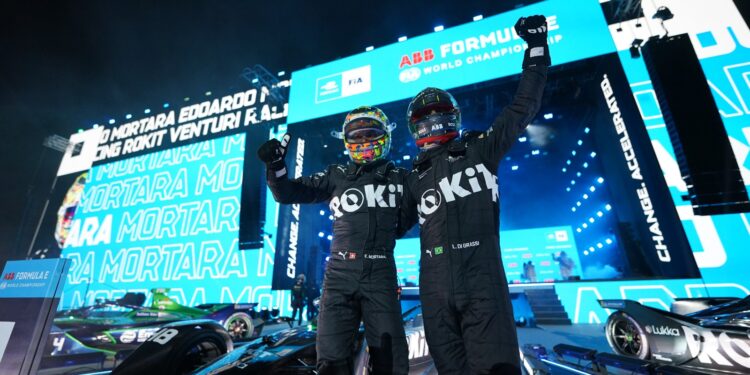 It was an all-Mercedes powered front row with the Mercedes-EQ of Nyck de Vries starting on pole ahead of the ROKiT Venturi of Edoardo Mortara. De Vries had a great start yesterday moving up from P3 to P2, and had another good start today keeping his spot at the front of the pack and pulling 0.7 seconds over Mortara through the course of the first lap.

Unlike yesterday where the second placed driver lost out at the start, Mortara managed to hold off Robin Frijns, who was the filling in a Venturi sandwich, with Lucas di Grassi sticking close to the Envision’s rear wing.

Antonio Felix da Costa, who didn’t make it past the opening lap yesterday after taking contact at the first corner, while still in the running today wasn’t having a great time of it. Falling from P7 to P9 in the first few minutes, the Techeetah driver continued falling back and was down to P12 by the time the first ten minutes had passed.

P7 and P8 placed Oliver Rowland and Jake Dennis were the first two to take Attack Mode, which today will be two activations of four minutes each, and the Andretti made the power boost work better and move ahead of the Mahindra.

Third-placed Frijns was the first of the top four to take Attack Mode and briefly fell behind di Grassi, but when the other top runners activated their first boost, the Envision driver regained the podium place.

After a great start to his Formula E career with a P9 and his first points in the season opener, Oliver Askew’s attempt to repeat that got a little harder after getting out of shape while under pressure from Pascal Wehrlein and da Costa, and both slipped past dropping the Andretti driver down to P12.

With 26 minutes on the clock, it was all action at the front. Di Grassi had taken his second Attack Mode and got back into P3 when Frijns activated his a lap later. Both then moved up a position when Mortara took his second. De Vries, who was still in normal power mode, had to go on the defensive into T18 when di Grassi went to the outside. There was rubbing into that corner and then pushing and contact into T19, but it was the Venturi who managed to get through the corner first and take the lead from the Mercedes.

As that was happening, Mortara was fighting Frijns for P3 and on that lap managed to not only pass Frijns but went down the inside of de Vries heading to T18 and was through into a Venturi 1-2 before the corner. With the last few seconds of his final Attack Mode, the Swiss driver made the Venturi 1-2 more preferable to himself as he slipped past his teammate.

With 16 minutes on the clock de Vries, now in P4 and in the last 90 seconds of his Attack Mode, is told that he has a percentage less energy than his rivals. The leaders hadn’t been able to pull a gap though and there was a train of drivers, the top ten of more, all within a second of the car ahead.

A couple of minutes later and it had all gone wrong for the polesitter, as he makes contact with Vergne as the Techeetah driver goes first on the outside then cuts back to the inside and the two clash as they both try to make it through T19 first. The Techeetah is the winner and de Vries then loses more places on the following straight falling well back to P9.

At the two minute mark, Frijns made an almost uncontested move past di Grassi to split the Venturis in the provisional podium places. The Envision driver got the move done just before Mahindra’s Alexander Sims whacks the wall in T5 and pulls over with a broken car at T6.

That meant that the Porsche Safety Car made its second appearance of the weekend, and as a tractor was brought out on track to pick up the Mahindra, the cars were brought to a standstill as they navigated around it, and on the final lap, navigate around it while Sims’ car was dangling driver head-height where they were driving.

As the incident happened within the final ten scheduled minutes, there would not be any time added and as the track wasn’t cleared in time for racing to resume and it ended under Safety Car but despite that it was a deserved win for Mortara.

It was a much better race for Andre Lotterer than yesterday, the Porsche driver not as involved in the action but neither did he fall back from a front-running position. The German taking P4 in the E-Prix ahead of yesterday’s third-place driver, Dennis.

Vergne was the only Techeetah driver to finish in the points with P6 ahead of Vandoorne, who also took the fastest lap point.

Rowland was P8 in the sole remaining Mahindra while Wehrlein finished P9 ahead of yesterday’s winner and today’s polesitter, de Vries.

Mitch Evans took the chequered flag in P11, but the Jaguar TCS driver is under investigation for not using all his Attack Mode and might drop back further as a result.