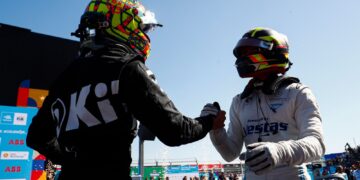 Mortara wins but Vandoorne and Mercedes take the titles

Mortara wins but Vandoorne and Mercedes take the titles 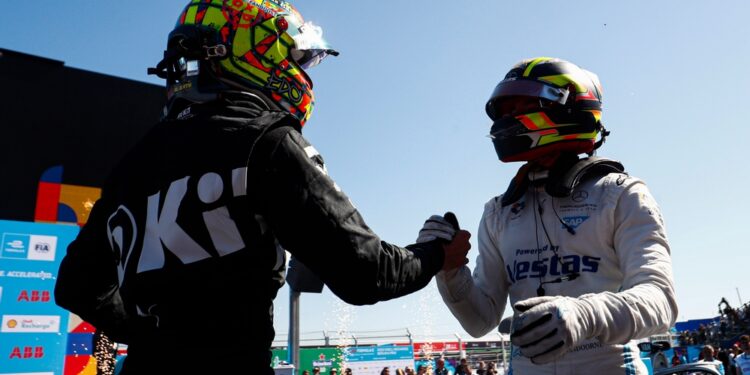 Seoul E-Prix 2 – After taking the lead early, Edoardo Mortara cruised to his fourth victory of the year while Stoffel Vandoorne and Mercedes took the titles.

With the championships to decide, the Gen 2 car to enjoy for one last time, Mercedes’ final race in the series, and a celebration of Formula E and Lucas di Grassi reaching their 100th E-Prix, there will be a lot going on in Seoul during the final 45 minutes + 1 lap of season 8.

It’s advantage Stoffel Vandoorne in the Drivers’ championship with the Belgian leading in the points and starting P4 while rival Mitch Evans, who needs to close the 21 point gap, is back in P13. On the Teams’ side of things Mercedes have a 31 point lead to Venturi but both of the Monegasque team’s drivers are starting in the top ten and have been strong recently.

For the race itself, Antonio Felix da Costa will start on pole with Edoardo Mortara beside him, the last time these two lined up this way, back in Marrakesh, Mortara was the one to take the chequered flag first. At the back of the grid is Alexander Sims, who was handed a 60 place grid drop for changing parts and will have to serve a 10 second stop and go penalty during the race, and Sacha Fenestraz who is deputising for Antonio Giovinazzi at Dragon as the Italian injured his wrist in yesterday’s race.

There was a bit of confusion with the start being held slightly long as Andre Lotterer had pulled into the wrong grid position, and would later be given a drive through penalty as a result.

When the E-Prix did start it was a perfect getaway from da Costa who held his lead with the top five holding station while there was madness behind them with a lot of carbon fibre being crunched in the first couple of corners as Maximilian Guenther went for it at the start.

With 41 minutes on the clock, Mortara went down the inside of the Techeetah driver while Jake Dennis took advantage of the fight to also make it past da Costa. Vandoorne held position in P4 but Evans was on the move, getting up to P9 within the first five minutes.

Robin Frijns was the first of the top ten to activate Attack Mode, while Pascal Wehrlein, who had been the first overall to take the power boost, retired at the side of the track after an incident between himself and reigning champion Nyck de Vries. The Porsche driver was decidedly unimpressed with his competitor’s driving “I hope he doesn’t get to F1 with his shitty driving. ******* idiot!”, and that saw the two of them retire before the opening 15 minutes had passed.

Despite being so early in the race, Wehrlein and de Vries were the fourth and fifth retirees joining Lotterer, Oliver Rowland and Dan Ticktum, it was big disappointment for Ticktum who after making it to the duels and getting past di Grassi for P6 at the start, was looking for a good last race of the season.

With 26 minutes on the clock di Grassi started falling back from P6 and had to pit with a front right puncture, dropping him back to P14 and making Venturi’s attempt to snatch the Teams’ championship from Mercedes much harder.

A few minutes later however, Guenther stopped on track between T19 and T20 with a broken front right and the Safety Car was called out to play. That meant that the field would be closed up, which would potentially help di Grassi and Evans down in P8, but it also meant that the final two minutes of his Attack Mode would be wasted.

The marshals attempted to push the stricken Nissan into a safe place but with the broken steering that wasn’t possible so a crane had to be brought out instead. The race resumed with 13 minutes on the clock, but there would be 6:45 minutes added at the end to compensate for the time behind the Safety Car.

Mortara took his final Attack Mode as the race resumed and da Costa went for the move on Dennis for P2 but the Techeetah racer got a bit of a tap on the rear as he squeezed the Andretti going into the corner and that saw the gold car into the barrier and by the time he had recovered he was at the very back of the pack. Dennis subsequently got a five second penalty but the incident meant that Vandoorne was promoted to the podium while Evans was now P7.

At the front, Mortara had pulled a few seconds of a lead over Dennis and was looking solid for the victory, while da Costa and Turvey were making up places at the back.

After being indomitable since taking to the front, Mortara was the first to the chequered flag for his fourth win of the year. As with the final round of last season, while Venturi took victory on the day it was Mercedes who would be celebrating the double championships. Stoffel Vandoorne sealing the Drivers’ title thanks to his incredible consistency over the course of the season while Mercedes retain their Teams’ crown, one that they will wear out of the series as this was their final Formula E race.

With Dennis having a five second penalty, he dropped behind Vandoorne at the end so the Belgian was P2 with the Andretti racer P3. Frijns finished his season in P4 with the second Andretti of Oliver Askew behind him.

Jean-Eric Vergne was the leading Techeetah in P6 but da Costa did manage to make it back to the points at the end to take P10. Evans could only manage P7, another year that his championship fight fell apart at the very end, while Nick Cassidy made it double points for Envision in P8, just ahead of Sebastien Buemi, and the Kiwi also took the fastest lap point with a 1:22.401.