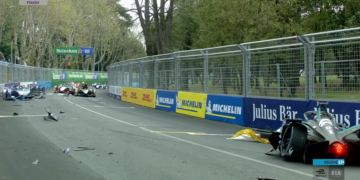 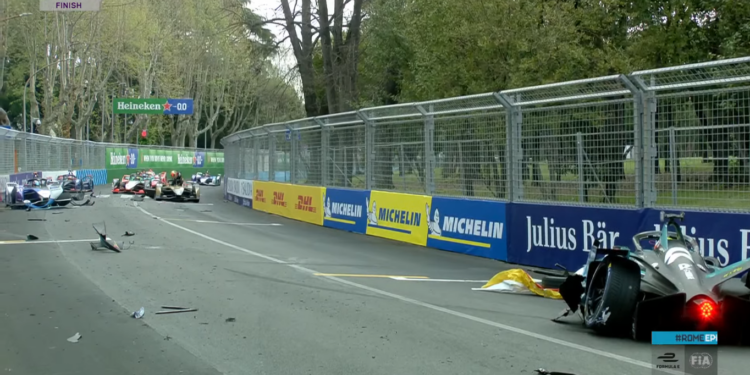 Rome E-Prix – The first practice session of the day ended in shards of carbon fibre with a three-car incident following the chequered flag.

As the cars were lining up for their practice starts on the Roman street track, NIO 333’s Oliver Turvey was seemingly unaware he wouldn’t have a clear track ahead as he drove around the curve on the start straight.

Turvey went at high speed into the back of DS Techeetah’s Jean-Eric Vergne and BMW i Andretti’s Jake Dennis, and was lucky not to collect any more of the grid as his car’s momentum brought him to a stop further up the circuit.

All drivers involved were able to exit their cars under their own steam though the question now is whether the three teams will be able to fix their cars in time for FP2 which starts at 9:15am, 85 minutes after the end of the first session, and more importantly qualifying which will start at 11am.

Hi guys quick update to tell you I’m ok and all drivers are fine. Now let’s hope my team @DSTECHEETAH can fix the car on time 👊🏼

Prior to that incident, there had been a brief red flag during the session to recover the other NIO 333 of Tom Blomqvist, who lost the rear going through T14 and hit the wall on the exit.

Before the practice start incident, the session had ended with Audi Sport Abt Schaeffler’s Lucas di Grassi setting the fastest time of 1:38.785.