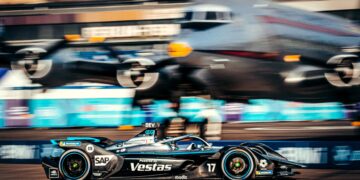 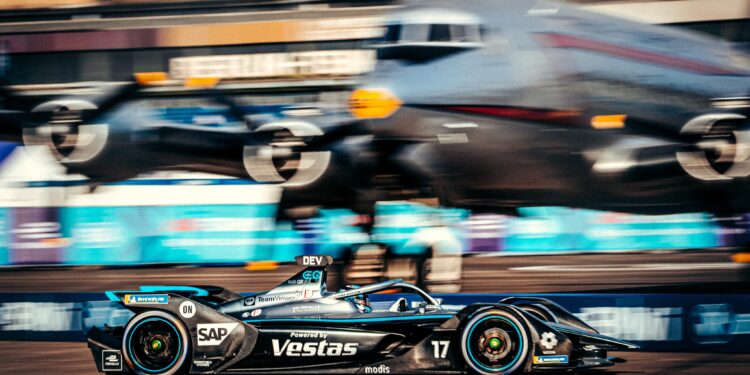 For the third time this season it was Stoffel Vandoorne at the front of the grid but there was drama as soon as the lights went out as Mitch Evans’ Jaguar jumped forward slightly before coming to a dead stop. Fellow championship contender Edoardo Mortara, starting from P11, was unsighted and went straight into the back of Evans and the two were out of the race and the championship there and then.

The Safety Car was brought out but the Red Flag followed soon after, so the rest of the cars pitted at the end of the opening lap. Both Evans and Mortara were able to get out of their cars, though the Venturi driver was feeling some back pain, though both were incredibly disappointed that their championship hopes ended the way they had.

Just less than half an hour later the cars were back on track with Jake Dennis, in P8, the highest placed championship contender while the current leader in the title fight, Nyck de Vries, was very lucky not to have also been caught up in the incident and restarted in P12.

At the first corner Dennis was trying to overtake Sebastien Buemi when he locked his rear tyres and his car went into the wall and the BMW driver was the third title contender out of the race. That brought the Full Course Yellow flags out while the stricken car was removed and the stricken driver had his head in his hands at the side of the track before having to walk back to the pit lane.

With 36 minutes still on the clock the remaining cars were back racing and de Vries was into the points in P9 and looking set to take the title. Back at the front Vandoorne was under a lot of pressure from Rowland. Norman Nato in P4 was the first to head to the Attack Mode activation zone and then moved to P3 when Alexander Sims also activated the boost.

Vandoorne had a little breathing space when Rowland took his first AM and fell to P4 but Nato was on a charge and took the lead. It was not a good lap for Vandoorne as the Belgian then went wide a few corners later which allowed Sims to move up a place and then Rowland also demoted the Mercedes not too long after.

De Vries had made it to P6, right behind his teammate as Vandoorne rejoined after his first activation, but then had to spend a few minutes regaining that spot after Tom Blomqvist saw an opportunity and overtook the Mercedes.

With twenty minutes on the clock, Nato had almost 2.5 seconds in hand and while he lost a good chunk of that activating his second Attack Mode, he had well made it back by the following lap. Using his second Attack Mode, Rowland had moved back into P2 but was over 4 seconds back however Antonio Felix da Costa and Lucas di Grassi had been fighting for P12, that battle ended with da Costa being squished into the wall and unable to continue.

Di Grassi was subsequently handed a drive though penalty but that incident meant another championship contender was on the DNF list, the Safety Car made a reappearance, and Nato’s lead was gone.

At the restart the Venturi driver was under immense pressure from both Rowland and Sims but somehow managed to hold them off and all remained as was. The following lap de Vries slipped past Sims for P3, and Lotterer followed him through but Sims fought back, passing the Mercedes and Porsche as the two squabbled and then Lotterer and the two Mercedes went three wide and made contact right behind the Mahindra.

Within a few corners de Vries had moved from P4 to P3 before falling back to P7 as Wehrlein also took advantage after the Mercedes made a sandwich of his teammate Lotterer. It was the other Mercedes then that made a move stick on Sims as Vandoorne moved back onto the podium.

In the final few minutes Nato had once again pulled out just over two seconds over P2, Vandoorne was closing up on Rowland but there was a six car train behind Sims. In that group was de Vries and the championship leader made a lunge for Wehrlein’s P6 and almost got put in the wall for his attempt.

On the penultimate lap Lotterer made a move stick on Sims but the Mahindra driver almost got it back straight away. Behind that de Vries was in the wars, getting hit from behind and then getting pipped by Sam Bird at the end to take the World Championship in P8.

It ended with Nato, Rowland and Vandoorne on the podium, with Rowland signing off his time with Nissan in great fashion. Lotterer was P4 with Sims in a Porsche sandwich in P5, just ahead of Wehrlein.

Bird was P7 with de Vries P8. As with yesterday, Rene Rast finished P9 and while he didn’t have the fastest lap of the race, that went to his teammate di Grassi, he did have the fastest in the top ten and so once again took the point for that. The final points position went to Blomqvist, who has had a fantastic day getting into Super Pole and then taking another point for NIO 333.

De Vries won the World Championship with 99 points, 7 ahead of Edoardo Mortara, who missed the championship podium as he was taken to hospital for precautionary checks, and Jake Dennis a point behind for third.

Not only do Mercedes win the Drivers’ Championship but, with their double points, finish they moves from fifth to be the inaugural Teams’ World Champions.