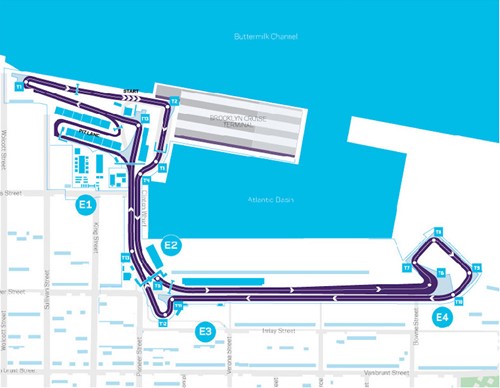 The 2018 New York City Formula E race will be held on an altered version of the circuit from the one used in the debut race last year.

The Red Hook circuit has been extended to 2.45km, nearly half a kilometre longer than the original layout, with the addition of four new corners.

The hairpin of Turn 6 has been replaced by a new complex of corners – a left followed by a series of rights which leads back onto the original layout along the back straight which leads to the chicane where Mahindra’s Felix Rosenqvist and Dragon’s Jerome D’Ambrosio had spins in the double header event last year.

The changes have been made as a long-term project in reaction to the speed Formula E’s Gen2 car, which will be introduced for the 2018/19 season, is capable of, as well as to create more overtaking opportunities.

The new car’s extra downforce and power has called into question whether the circuits the all-electric series currently uses will still be viable when the faster car is used. The Brooklyn circuit is the first to make alterations to accommodate the Gen2 machine.

The Gen2 car will be capable of completing races without a car swap, using a new battery from McLaren Applied Technologies, and will have 250kW of power in qualifying mode, up from the current 200kW.

Audi, DS, Jaguar, Mahindra, Nissan, Penske and Venturi took part in the first communal manufacturer group test of the new car at the Monteblanco circuit in Spain on Thursday, where some 2,000km of running is anticipated to have been completed.