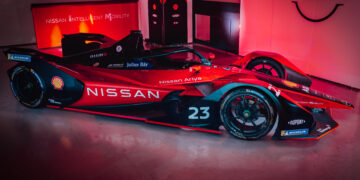 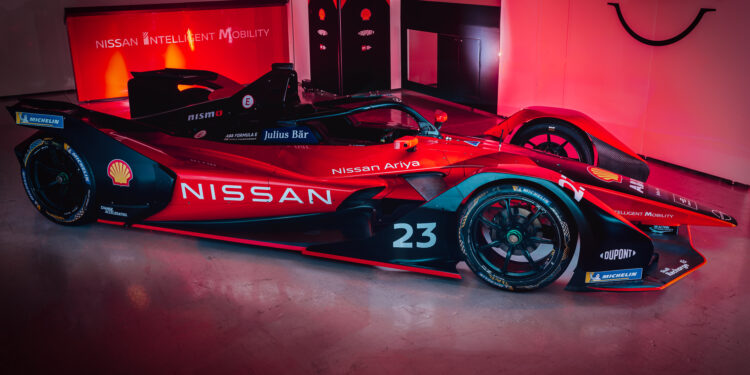 Whereas the last two years have seen the Nissan car sport a white, black and red this year, they have decided to do away with the white in the newest design by the company’s senior vice president for global design, Alfonso Albaisa, in favour of brighter red highlights.

Nissan will be hoping for a return to form in the upcoming season after only taking one pole and two podiums throughout season 7, a P2 and a P3, while having one or both cars disqualified from three events for energy or technical infractions.

While Sebastien Buemi remains with the team as he has since the series’ debut race in 2014 when e.dams were partnered with Renault, he will have a new teammate for season 8. Buemi was partnered with Nicolas Prost for the Renault era and had been alongside Oliver Rowland since season 5 when Nissan arrived but after Rowland moved to Mahindra, Maximilian Guenther has taken up the empty seat.

“It’s great to be back with Nissan e.dams for our fourth season together,” said Buemi. “And I would like to warmly welcome Maximilian to the team. Maximilian brings good pace and some fresh approaches to racing, so I hope we can create a powerful combination based on the strong foundations and extensive experience we have at Nissan e.dams.

“We aim to be competitive from the first race to the last. We’ve got work to do and the team is highly motivated.”

Guenther also believes that the combination of himself and Buemi will be a successful one and is looking forward to the new season.

“I’m really excited to go racing with such a historic and successful racing brand as Nissan,” Guenther said. “Formula E is extremely competitive and thrilling to race in, and I feel that with Seb as my teammate and the team behind me, together we can do great things.

“In my first weeks with the team, I can see that there are big plans both on and off the track and I am looking forward to a busy and competitive Season 8. The new race car looks stunning, and I can’t wait to drive it at full race pace at the Valencia test.”

Gregory and Olivier Driot, Co-Team Principals of NIssan e.dams, are very happy about their new line-up and hope the team’s work since season 7 will be rewarded in season 8.

“We are very excited and looking forward to seeing our stunning new livery on track,” said the Driots. “We were competitive towards the end of last season and the team has continued to work hard during the break. Our aim is to be competing at the front of the field from the opening race in Diriyah. We are delighted to have Maximilian on board and we believe he and Sebastien will form a strong partnership, which should bring success on and off-track.”