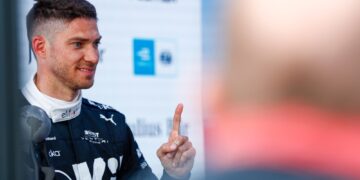 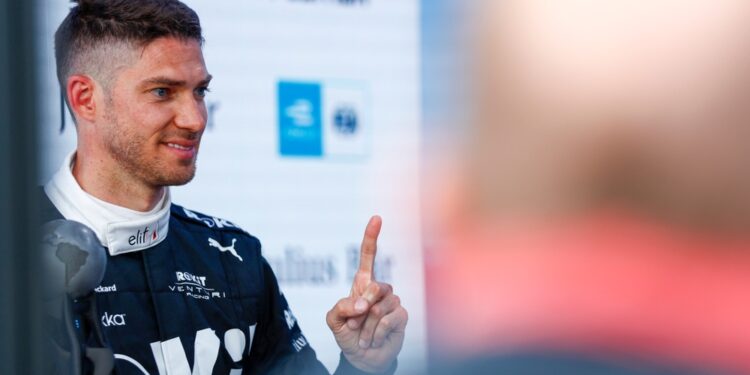 Berlin E-Prix 2 – Edoardo Mortara was once again in a class of his own in qualifying this weekend as the ROKiT Venturi driver beat Robin Frijns to pole.

It was the Dragon/Penske cars out first in yesterday’s qualifying groups but today Nick Cassidy beat the American team to the track. The Envision driver had a day to forget yesterday and ended up retiring quietly from the race ten minutes from the end. Dragon’s Sergio Sette Camara meanwhile had a very impressive qualifying, making it through to the duels for the first time, however the race didn’t pan out for him either and finished well out of the points.

Cassidy’s opening lap, a 1:08.275, only managed to hold the top of the charts for a few seconds until the rest put in their opening times and one they had all done so, it was the fastest driver from practice, Lucas di Grassi’s 1:07.356 leading the way.

The track quietened but didn’t completely empty as Cassidy had headed to the pits early and was back out circulating as the last of the others departed. At that point, di Grassi was joined in the provisional progression positions by Mitch Evans, Robin Frijns and Alexander Sims, the four separated by less than 0.1 second.

The clear track allowed Cassidy to jump into P2, 0.014 off di Grassi, before the final flurry of lap times came in. While neither Cassidy or di Grassi were able to improve at the end, their earlier efforts were enough to see them progress in P3 and P4. Stoffel Vandoorne and Frijns took the top spots, the Mercedes with a 1:07.115.

It was quite a turn of form with the two Envisions headed for the duels while Pascal Wehrlein, who got to the quarter-finals yesterday, could only manage tenth for Porsche. As with yesterday though, Evans just missed out and will be on row five for the race again.

The stewards announced some investigations at the end of the session with both Cassidy and de Vries being looked at for not following technical instructions, but those will be dealt with after qualifying.

Dragon did make it out first in group B with Antonio Giovinazzi setting a 1:07.864 but that was shuffled back and the first round of times ended with Nyck de Vries’ 1:07.177 in P1. While the reigning champion headed straight for the pitlane after setting his time, Edoardo Mortara did a second flyer and improved to the top with a 1:07.098.

The track did go fully quiet for a few minutes this time and it was Mortara, de Vries, Maximilian Guenther and Andre Lotterer in the top four, with Sam Bird P5 for Jaguar and the two Techeetahs in P7 and P10.

The track got busy again for the final few minutes, the Nissan e.dams the first to take the chequered flag while the Jaguar and Techeetahs at the back. While Bird didn’t manage to improve, the gold cars did with Jean-Eric Vergne slotting into P4, but only momentarily as he was demoted by his teammate going P3.

It ended with Mortara well ahead of the rest with a 1:06.753, with de Vries in P2 and Lotterer saving face for Porsche in P4, and continuing his streak of making it through to every quarter-final yet.

It was all over at the first corner in the first duel, Vandoorne locking up and losing three tenths to the Porsche driver. While the Mercedes tried to pull it back, there was no beating the Porsche this time. QF2 saw da Costa slightly ahead in the first sector but the bright green Envision just kept closing and in the end there were only 0.014 seconds in it, but it was Frijns who would be progressing.

There was nothing really in it at the start of duel three but de Vries had the edge on di Grassi in the final two sectors and one of the Mercedes would be contesting the semi-finals. The last of the opening round of duels saw Mortara’s Venturi just ahead to begin and while Cassidy did his best, like yesterday, there was no stopping the Swiss driver.

It was an all-German powered affair with Audi, Porsche and two Mercedes powered cars in the fight for the final.

It was a slight advantage to Frijns at the start with the Dutch racer nearly three tenths up but he went a bit too deep at turn 5 which gave Lotterer a lifeline. While the Porsche did close the gap, it wasn’t enough to see him beat the Envision.

The all-Mercedes second semi was not great for the factory Mercedes team. De Vries having a less than perfect first corner which helped Mortara to a two tenth advantage and then there was no stopping the speedy Swiss driver, despite the Venturi tapping the wall, Mortara crossed the line over three and a half tenths up on de Vries with the fastest time seen in qualifying so far, a 1:05.897.

It was a messy turn one for Frijns, which dropped him a tenth and a half back, a gap that was almost doubled at the end of the first sector and while the Envision racer was not too much slower than the Venturi in the second and third sectors, it was not enough to hold back the force of nature that Mortara is at the moment. It ended with the Swiss driver not beating his semi-final time, but still half a second quicker than Frijns.

De Vries and Lotterer will line up on the second row while da Costa and di Grassi will be P5 and P6. Vandoorne will be ahead of Vergne on the fourth row while Evans and Rowland round out the top ten. Despite missing out on the duels, Evans hasn’t lost out too much as the two drivers ahead are also the two ahead of him in the championship.

Frijns’ teammate, Cassidy, would have been lining up in P6 given his quarter-final time but he was handed an 80 place penalty for changing his MGU, gearbox, inverter and DCDC (20 places for each). That means that he will be starting at the back and as he obviously can’t drop back as many places as he should, he’ll also have to serve a ten second stop and go penalty during the race.