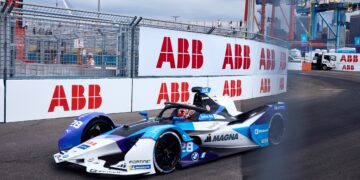 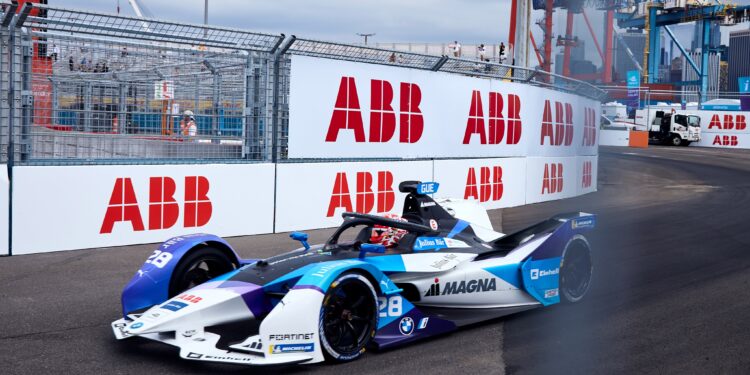 New York City E-Prix 1 – Maximilian Guenther slipped into the lead in the late stages as Cassidy and Vergne fought over the position.

Nick Cassidy’s second go at starting from pole went much better than his first try back in Rome, the Envision Virgin Racing driver holding his position and even pulling a bit of a gap to Jean-Eric Vergne over the first few laps.

Alex Lynn was the big loser at the start, the Mahindra racer started P3 and tried to make a move to a higher spot on the run to the first corner but he locked up and instead lost places to Sebastien Buemi and Maximilian Guenther. Buemi meanwhile, had started P5 but got past Guenther at the start to take Lynn’s original spot of P3.

Lynn was the first to activate his Attack Mode, just seven minutes into the race, but returned to the racing line while there were a queue of cars there and had to step on the brakes to avoid colliding with anyone, that drops the Mahindra back to P8.

Lynn and Pascal Wehrlein swapped positions multiple times as Attack Mode was used but with just a third of the race run, the two came to blows. Wehrlein seemed to be headed to take his second Attack Mode but ran into the rear of the Mahindra who was braking ahead of him to make it around the hairpin. Lynn was spun and lost a place to Oliver Rowland but the Porsche sustained suspension damage and limped back to the pits to retire.

There was a very brief Full Course Yellow period twenty minutes into the E-Prix as Jaguar’s Mitch Evans stopped on track with technical issues and retired. Although brief, when the race went green again Vergne was much closer to Cassidy but there were no challenges issued yet.

Buemi meanwhile had fallen back from his third spot initially losing out to Guenther but couldn’t make the most of his second Attack Mode and instead fell behind his teammate Rowland and a charging Robin Frijns to be P7 with ten minutes to go.

The top four in the final third of the race were then Cassidy, Vergne, Guenther and di Grassi, all line astern and looking for any advantage they could get. The first move came with just over seven minutes on the clock, Vergne had a look and made Cassidy defend before making a second attempt at the hairpin. The Techeetah went down the inside and bashed wheels with the Virgin but it was third placed Guenther who made the most of that squabbling to slip through to the lead.

Plot twist. @JeanEricVergne goes for a move into the lead BUT @maxg_official TAKES THE POSITION 🔥

Vergne remained in P2 but Cassidy dropped back to P4, just in front of his teammate and championship challenger, Robin Frijns. Back at the front, Guenther had had more energy available that the other front runners and was able to pull a bit of breathing room for himself while di Grassi stayed right on Vergne’s tail but wasn’t able to take the challenge to the double-champion.

Cassidy remained fourth just ahead of Frijns, who will now be level on points at the top of the championship with Edoardo Mortara. Buemi and Rowland brought Nissan their first double-points scoring race of the year in sixth and seventh.

Andre Lotterer was the lone-finishing Tag Heuer Porsche in eighth while Sam Bird made a great recovery drive to ninth after crashing in FP1, missing FP2 due to repairs and having issues in qualifying which saw him start P20. The Brit also took the fastest lap point while Rene Rast, who started from the back after being caught behind a power-limited Mortara on his qualifying lap, took the final point in tenth.

There were six non-finishers in the race, Wehrlein and Evans as already discussed. Nio 333’s Oliver Turvey, Mercedes EQ’s Stoffel Vandoorne and BMW’s Jake Dennis all retired due to damage while Alexander Sims’ Mahindra had a puncture.