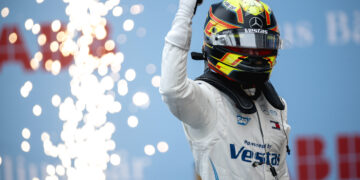 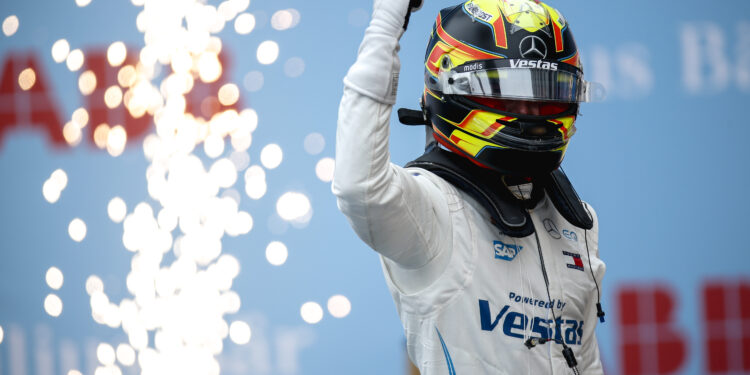 For the second E-Prix in a row the race was started behind the Mini Electric Pacesetter, even as the track didn’t appear to be as damp as yesterday. However, Jean-Eric Vergne and Sam Bird expressed concerns about the positioning of the start grid in yesterday’s post-race press conference, and that the potential for an incident was high, so perhaps it was a combination of that and the damp that lead to the decision.

As the Safety Car pulled in the grid was very spread out, over 30 seconds, Robin Frijns was later handed a five second penalty for failing to stay within 10 car lengths of the car ahead of him. Nick Cassidy was then leading but locked up and spun at the first corner leaving his fellow rookie, Norman Nato, at the front.

The Frenchman had a few laps in first before the experience of Pascal Wehrlein and Stoffel Vandoorne saw them slip past the Venturi within a few corners of each other. With half an hour to go, old rivals Lucas di Grassi and Sebastien Buemi came together while fighting, the Nissan was able to continue whereas the Audi was stranded on track which brought out a Full Course Yellow for a few minutes.

Mahindra’s Alexander Sims was on the ball and as soon as the track went green again he slipped past Wehrlein for second. Vandoorne was comfortable at the front with more than a five second gap to Sims however, with less than ten minutes on the clock, Rene Rast’s Audi broke after hitting the wall, leaving him at the side of the track, the Safety Car back out and Vandoorne’s buffer gone.

As the Mini pulled back into the pits, the leading Mercedes slowed the pace to run the clock down and leave them with only a single racing lap to complete. There was drama behind on the final lap as Edoardo Mortara and Maximilian Guenther almost lost it line astern over the bump but Nyck de Vries wasn’t as lucky, losing control and taking both himself and Sam Bird out.

It was close, not just on track at the front, but also on an energy front, with cars running down and although Nato crossed the line third, he was disqualified by the stewards before the podium for overusing energy. Wehrlein, who had faded to fourth after leading early on, inherited the final spot on the rostrum.

Vandoorne was delighted over team radio after taking the chequered flag saying “Redemption. This is the win we should have had yesterday.”

Mortara and Guenther’s last lap saves meant they finished well in fourth and fifth, while the day did not go as well for Jaguar, with Bird being taken out at the end while Mitch Evans settled for sixth. Reigning champion, Antonio Felix da Costa, brough the only DS Techeetah points home with a 15th to 7th drive.