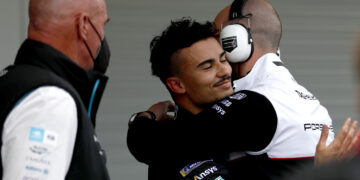 Redemption for Wehrlein as Porsche take 1-2

Redemption for Wehrlein as Porsche take 1-2 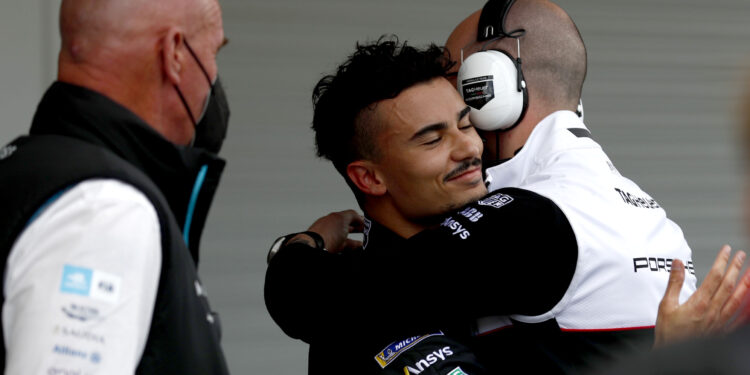 Mexico City E-Prix – Pascal Wehrlein banished his Mexican demons to take his and Porsche’s first win in an unpredictable E-Prix.


After having had two previous pole positions, both in Mexican races, but has either been pipped at the line and then given a penalty which knocked him off the podium, or has taken the chequered flag first but been disqualified as soon as he did. It was third time lucky for the German however as he took his and Porsche’s first Formula E win.

As the race started, Pascal Wehrlein was challenged by Edoardo Mortara on the run to the first corner but the Tag Heuer Porsche driver defended hard and held his place. Despite having multiple cars side-by-side, all cars got through the first few corners safely.

The double yellow flags made an appearance within the first five minutes however as Alexander Sims’ Mahindra lost drive and pulled off, and out of the race, in the stadium section.

Andre Lotterer was the first to go for Attack Mode, which is the usual two 4 minute activations for today, and while he was onto Mortara’s tail when the Venturi driver activated his for the first time he couldn’t make a move. It wasn’t until the race leader went off-line to activate his Attack Mode that there was a position change, Mortara had closed right up to Wehrlein and on the run to T1 he muscelled his way past and started pulling a gap.

Once the Techeetahs, who started P4 and P5, took their initial activation they were on a charge. Vergne and his old teammate, Lotterer, having a very clean fight with some nice side-by-side action, but Vergne found a gap and as he slipped past, da Costa took the initiative and followed right through, demoting the Porsche to P5.

One Porsche down but it wasn’t even a lap later that the two-time champion had made it two for two and Vergne was into P2 and reeling Mortara in. Da Costa was having a harder time of it as he hit the back of Wehrlein as the German was slowing for the tighter turn to the Attack Mode zone. The Techeetah’s front wing took damage and was hanging off and while it did detach, da Costa had already lost positions to Lotterer and Robin Frijns.

The Techeetah and Envision drivers had some great overtakes on each other over the next few laps but the Dutchman had the upper hand and, with the last seconds of his final Attack Mode, made the move stick at T1.

With the race into the final 15 minutes it was the Porsches who were on the move. After falling back earlier, Wehrlein leads the charge past Vergne which Lotterer and then Frijns also take advantage of over the same lap. A couple of minutes later and the Porsches had climbed the podium steps again as both breezed past Mortara within a couple of corners.

While Wehrlein and Lotterer pulled out a few seconds of a gap at the front, Frijns moved past the Venturi to provisionally have his hand on the final trophy of the day but the Envision car had used energy to get to there and had 2% less to play with than the cars ahead but Vergne and da Costa had a bit more than both him and Mortara.

With two minutes to go, Vergne got through to P4 at T5, his teammate once again following his lead and the two also demoting the Envision from another podium when they got past Frijns.

The pace of the Porsches caused trouble for the pack as they crossed the line just before the clock hit zero, meaning that there was one more lap to run than most teams had calculated for.

The Jaguars and sole remaining Mahindra had all be sitting in the points but weren’t ready for that additional lap and all fell out of contention on the lap, however, that was a saving grace for Nyck de Vries as the Mercedes driver had been well out of the points but ended up with a solid P6 and the fastest lap point when a 5 second post-race penalty dropped di Grassi out of the top 10.

The Porsches and Vergne took the podium places with da Costa and Mortara in P4 and P5. Frijns ended P7 with the two Nissans behind, Buemi P8 and Guenther P9. While Jake Dennis was another winner with the extra lap, and di Grassi’s time penalty, he took the final point for Andretti.

Aside from Sims, who stopped near the start of the race, Antonio Giovinazzi retired halfway through the E-Prix.