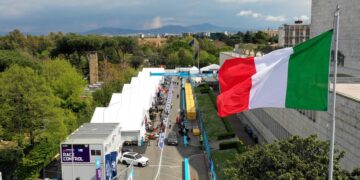 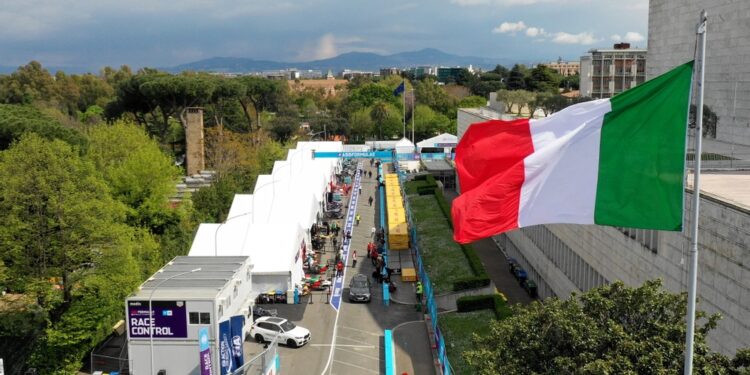 Formula E – After an eight week break, season 8 of the ABB FIA Formula E World Championship gets back on track this weekend with the Rome E-Prix.

It’s been quite a while since we last saw the Gen2 cars on track, so here’s a quick recap of what’s happened so far, both in the current season and on the Circuito Cittadino dell’EUR in previous visits to Rome.

What’s happened so far this season?

Season 8 started at the end of January with a doubleheader in Saudi Arabia for the Diriyah E-Prix. The opening race of the year saw the reigning champions, Mercedes EQ and Nyck de Vries, start their title defences in the best way possible. Both de Vries and Stoffel Vandoorne made it through to the new one-on-one duel part of the new qualifying format and ended up facing off against each other in the semi-finals. Vandoorne beat his teammate there and ended up winning the final but in the race an Attack Mode activation error saw him lose out to the Dutchman, and de Vries led Vandoorne home for a Mercedes 1-2 with Andretti’s Jake Dennis joining them on the podium.

The second race day in Diriyah was looking like it would be a continuation of the first, de Vries took pole after a very close-run duel with the Mercedes powered Venturi of Edoardo Mortara. The Mercedes-EQ team didn’t show the same dominating pace that they’d had the day before and de Vries saw himself shuffled behind the Venturi cars before a coming together with Jean-Eric Vergne saw the defending champion fall further back and just scrape a point at the end.

Mortara took the victory with teammate Lucas di Grassi in P3, while Envision’s Robin Frijns was second. There was some discomfort over the final few laps however as drivers were unhappy with the tractor on track and the way the retrieval of Alexander Sims’ Mahindra was dealt with by the marshals during the late Safety Car.

The third, and most recent race of the season, the Mexico City E-Prix took place in the middle of February and it was an event which saw Porsche and Pascal Wehrlein finally get some well-overdue luck in Mexico. Wehrlein claimed pole ahead of Mortara and while the early stages of the race saw the Porsche drivers lose out to their rivals, they stuck with their strategy which left them as one of the few comfortable on energy at the end. Wehrlein and Porsche took a dominant first victory taking the chequered flag nearly ten seconds ahead of third placed Vergne and, with Andre Lotterer in P2, continued the season 8 streak of race winners also having their teammate on the podium.

Formula E returns to Rome for the third year this weekend and will race on the same version track as they did for the double-header last season. There haven’t been any major changes to the layout compared to last year, the start line will be in a new position this time out.

Whereas in season 7 the start line was between corners 6 and 7, halfway around the circuit from the finish line. This time the cars will have three quarters of a lap to go before hitting the finish line as the new location for the start line is now between turns 3 and 4. The Attack Mode activation zone will be in the same spot as last year, on the outside of the turn 15 hairpin.

While the Italian fans had a home driver to support in the first Rome E-Prix, NIO’s Luca Filippi, the following years saw them without a driver sporting their colours. This year though, Dragon/Penske’s Antonio Giovinazzi will get to race around his capital city and the rookie can’t wait to get on track and hopefully give the Italian fans a great show.

“It is going to be a great feeling,” Giovinazzi said. “We’re talking about Rome, the capital of Italy, and the Eternal City. It’s giving me shivers; it is definitely going to be one of a kind experience racing around these streets. Italy has a great motorsport culture that covers many different generations, and it’s going to be incredible having public support back in the grandstand.

“Italian fans have always supported me wherever I have raced, I have always felt their love and appreciation and I cannot wait to see many people from across Italy coming to show their support. I really want to give something back to my supporters and fan club in the grandstands, putting on a great show and giving them some great feelings and emotions.”

What happened last time in Rome?

Last year’s races on the new version of the Circuito Cittadino dell’EUR saw both of the E-Prixs start behind the Safety Car due to wet conditions. The first race also ended under the Safety Car after a problem for di Grassi saw his Audi slow and both Mercedes crashed into him. Vergne took the win and was joined on the podium by the two Jaguar drivers, Sam Bird and Mitch Evans, who were also the two previous winners in Rome on the original track layout.

Race two very nearly ended behind the Safety Car after a crash for Audi’s Rene Rast but that was cleared in enough time for there to be a one lap dash to the line which ended with Vandoorne taking the laurels, joined on the podium by Sims and Wehrlein.

During the break the list of manufacturers who have signed on for next season was released, they are: DS Automobiles, Jaguar, Mahindra, Maserati, NIO 333, Nissan, and Porsche. Formula E says that the final list of teams who will be racing with some of the above hardware will be announced later in the year.

It was also revealed that the Gen3 car will be unveiling to the public for the first time later this month, on Thursday April 28th, just ahead of the Monaco E-Prix.