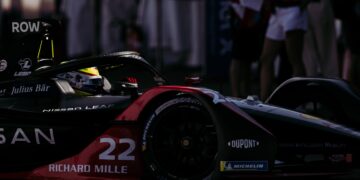 Rowland fastest in practice ahead on the reverse track

Rowland fastest in practice ahead on the reverse track 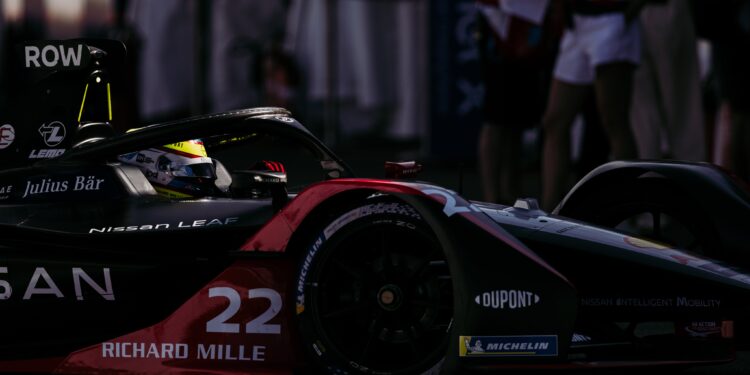 After a change around last night, the drivers only had two half hour sessions to get to grips with the reverse layout of the Berlin circuit. Apart from a few lockups and slides, there were no overly dramatic moments in the first practice and, as the drivers all switched their cars to full power in the final few minutes of that session, it was championship leader Nyck de Vries who ended with a best of 1:06.688.

It was a similar, drama-free story in the second practice and the final five minutes saw the full power laps with the earlier session times being well beaten as Rowland ended with a 1:06.372.

After BMW i Andretti topping both practices yesterday, they were close to doing it again today with Maximilian Guenther’s best only 0.043 slower than the Nissan driver. Norman Nato was the quickest of the Mercedes powered cars, ending the morning third for Rokit Venturi with a 1:06.502.

Stoffel Vandoorne was fourth, 0.207 seconds off the pace for Mercedes EQ while his teammate, de Vries, was sixth a further two tenths behind. The two were separated by yesterday’s polesitter, Jean-Eric Vergne, who was the quickest of the DS Techeetahs this morning.

Seventh was Jake Dennis, with a 1:06.784, while yesterday’s winner, Lucas di Grassi was the best of the Audis in eighth for Audi Sport Abt Schaeffler, 0.461 off Rowland.

The top ten was rounded out by Envision Virgin’s Nick Cassidy and Tag Heuer Porsche’s Pascal Wehrlein was 0.517 seconds off, the first outside half a second of the top time. In the end 22 of the 24 cars were separated by less than a second.