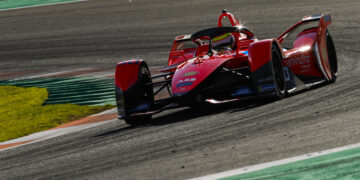 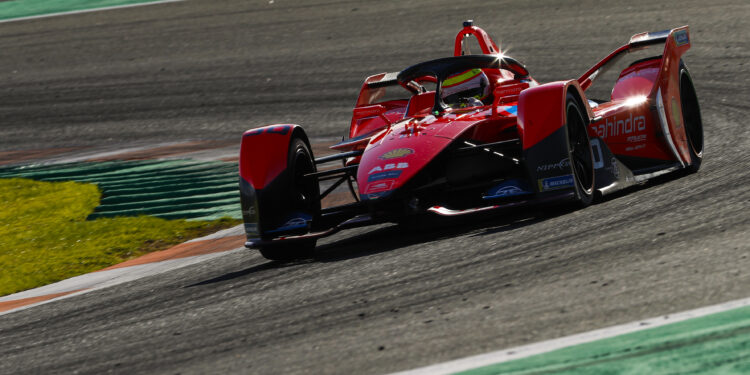 Diriyah E-Prix – Oliver Rowland put Mahindra on top with a last minute flyer in the opening practice of the 2022 World Championship weekend.

Starting the season off under the lights in Diriyah and it was the Jaguar TCS cars of Sam Bird and Mitch Evans who led the field out of the pits. Bird reporting back to his team that the “track is just horrendous”, with lots of sand and dirt to contend with. This year, all practice sessions will be half hour sessions as opposed to previous years where the first session of the weekend would be 45 minutes.

Nissan e.dams’ Sebastien Buemi was the early pacesetter with a 1:15.622 but it was the reigning champions, Mercedes EQ, who were the big story. On their first quick laps, 2021 champion Nyck de Vries, went wide at turn 3, got on the dirt and hit the wall. His car took left rear damage and wasn’t able to make it back to the pits, instead having to pull off and be collected by the marshals.

While that wasn’t an ideal start for Mercedes, it was almost a disaster, the replay of de Vries’ accident showed Stoffel Vandoorne also getting it wrong right behind his teammate and just managing to not hit the wall too.

There was a few minutes of Full Course Yellow to allow the marshals to collect the Mercedes and then it was back to green flag and tumbling lap times as the drivers continuously shaved tenths off the best times.

In the final minute of the session, Antonio Felix da Costa was the first driver into the 1:10s and was sitting at the top of the times but it was Rowland who dethroned the DS Techeetah driver on his last attempt. The Mahindra driver ending the session with a 1:10.559.

Da Costa’s time saw him P2, with last year’s rookie of the season, Jake Dennis, a couple of thousanths further back in P3. Jean-Eric Vergne in the second Techeetah was P4 with a 1:10.744 while Evans was P5, 0.505 seconds off the best.

The best of the Mercedes powered-cars was Edoardo Mortara’s Rokit Venturi with a 1:11.080 in P6, Porsche’s Pascal Wehrlein slotting in behind him in P7. Sebastien Buemi was P8 for Nissan, 0.640 off his teammate from the past few seasons, Rowland.

Rounding out the top ten were Lucas di Grassi, now racing for Venturi, with a 1:11.233 and Envision Racing’s Nick Cassidy, 0.770 off the fastest time of the session.